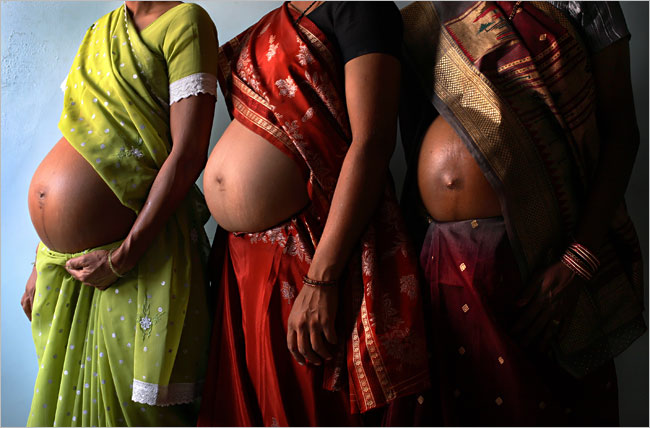 A surrogacy boom has given birth to the promise of parenthood for an increasing number of couples from around the world who travel to India, which has become a medical tourism hub because of the availability of advanced technology, large populations of healthcare professionals and relatively inexpensive costs.

But, in the absence of regulations in India's surrogacy industry, some unscrupulous agents are engaging poor, uneducated women to sign contracts they do not fully understand, a government-funded survey released this month reported.
‍

Many of the women in the study were bearing babies for couples from the United States and Great Britain. The report said some couples used Skype to periodically view the surrogate mother's stomach and monitor progress of the pregnancy.

American couples would expect to pay 5-6 times more for a surrogate pregnancy in the United States than they would in India. Other developing countries either do not allow for commercial surrogacy or have few advanced hospitals.
‍

Commercial surrogacy remains controversial and is banned in many countries. But, in India, surrogacy has thrived since the Supreme Court legalized the practice in 2002. A report by the Confederation of Indian Industry estimates the practice generate some $2.3 billion a year.
‍

An absence of any restrictions on surrogacy and the commercialization of an unregulated sector have opened the door for unethical medical practices and the exploitation of both child-bearing mothers and infertile couples, said Renée-Marie Stephano, president of the Medical Tourism Association, which will conduct an educational session on ethics in medical tourism at the 6thWorld Medical Tourism & Global Healthcare Congress, Nov. 3-6, in Las Vegas.

When couples from wealthy countries are desperate for biological services from vulnerable and, in all likelihood poor and uneducated women in India, the opportunity for exploitation, even unintentional, is inevitable.
‍

The Indian government drafted a bill last year to limit the age of surrogate mothers to 35, set a maximum of five pregnancies including their own children and to make medical insurance mandatory.

A further proposal would make it compulsory for prospective parents to show that a child born to a surrogate mother will have automatic citizenship in their home country. The bill also aims to stop clinics sourcing, supplying, and taking care of the surrogate mothers themselves.
‍

The survey, conducted by the Center for Social Research (CSR), a women's advocacy group based in New Delhi, claimed there is no fixed rule to surrogate mothers for payments, which are instead arbitrarily decided by the clinics.
‍

During pregnancy, the report said surrogate mothers are kept in guarded facilities, where social interaction is limited and the rights of those who miscarry not secured. Proponents say the surrogacy agreements mandate that the women stay in special shelters during their pregnancies because the facilities are cleaner than their impoverished neighborhoods. Plus, the women's health and nutrition can be monitored.
‍

Komal Kapoor, a 24-year-old surrogate who lives in a New Delhi slum, told the Washington Post that she felt something like sadness for only a few minutes after she handed over the twins she had just borne to a visiting American couple.
‍

Kapoor had signed an agreement relinquishing all rights to the children in return for a little more than $8,000 more than 12 times her annual earnings as a garment worker.
‍

With the money, I want to secure my daughter's future, she told the Washington Post.
‍

India, a nation of more than 1.2 billion, has emerged as a popular destination for foreign couples seeking low-cost, trouble-free avenues to become parents. Doctors, activists and agents say the surrogacy increase began when infertile couples of Indian origin from countries including the United States, Britain and the United Arab Emirates sought out women in India to bear their children.
‍

In most cases, the clients' sperm and egg are implanted in the surrogate's womb, with DNA tests done after the birth to prove the genetic links to the couple and ease the issuing of a foreign passport.

Although there are few statistics on the surrogacy industry in India, doctors admit the practice is growing among Indians, too. Earlier this month, one of Bollywood's biggest stars, Shahrukh Khan, announced that his newborn child had been carried by a surrogate, bringing social respectability and even some trendiness to the practice. But, the cost is still prohibitive for most in the country.
‍

India is becoming a popular destination in the search for surrogate mothers, agencies are mushrooming, and now Bollywood stars are also giving the whole practice a stamp of social legitimacy, Ranjana Kumari, CSR director, told the Washington Post. But, it is frightening that all this is happening in a legal vacuum and without any monitoring.
‍

CSR interviewed 100 surrogate mothers in New Delhi and Mumbai for the survey, as well as parents, doctors, surrogacy agencies and others involved in the business. Most of the surrogates were married and had at least one child of their own. About half of the respondents said they had finished primary school; a little over half said they worked as housemaids, earning an average of about $50 a month.
‍

A majority of women mentioned either poverty or their children's education expenses as the reasons for agreeing to become surrogate mothers. Most women told interviewers that it was their decision to be surrogates, but sometimes they were also pressured by their husbands to earn money.
‍

India serves as a worldwide destination hub for tourism of all sorts. The World Travel and Tourism Council calculated that tourism generated $121 billion or 6.4 percent of the nation’s GDP in 2011, and was responsible for 39.3 million jobs, 7.9 percent of its total employment.
‍

Across India, patients from all around the world including the United States flock to the country for its medical tourism opportunities, particularly for low prices and high-quality physicians. According to a study by the Confederation of Indian Industry, the medical tourism industry in India is worth an estimated $310 million. The country attracts about 100,000 foreign patients a year, 40 percent of which go to Chennai.
‍

The New Indian Express reported, World-class treatment at almost 1/10th of the cost with no waiting time for surgeries as compared with advanced nations like Great Britain and the United States that have been instrumental in a large number of foreign arrivals to access healthcare services in India.