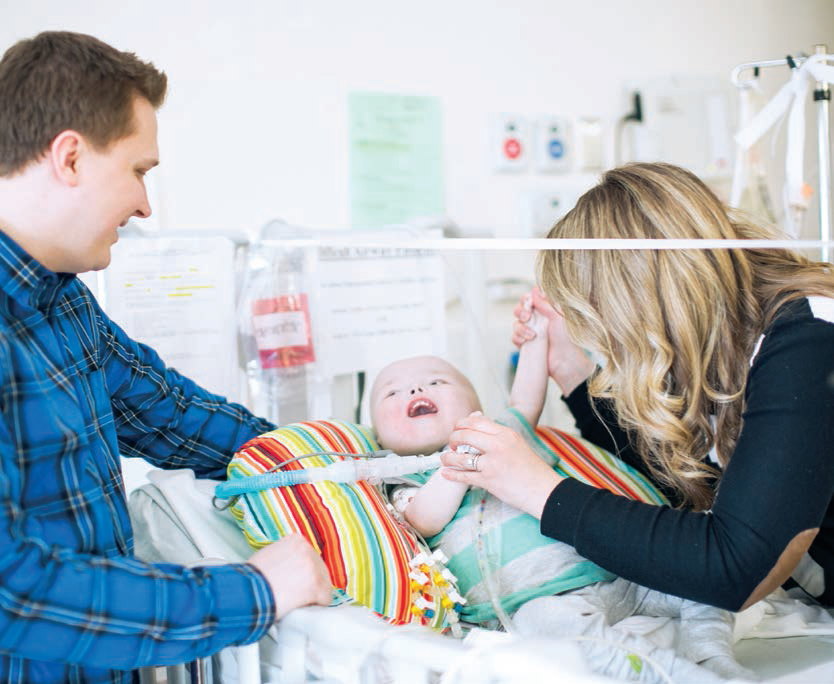 They watched. They waited and then – when their son got blue in the face — they hoped and prayed. For the first 18 months of life, he lay imprisoned to a hospital bed, tethered to ventilators, yet, prone to suffocating at any moment – multiple times a day. What else could Jake and Natalie Peterson do? The condition of little Garrett Peterson was so tenuous that the young couple could not even hold him for fear of compromising his breathing.

I will never forget seeing him for the first time like that,” said Natalie Peterson, 25. “He could go from being totally fine to turning blue sometimes – not even kidding – in 30 seconds. It was so fast. It was really scary.”
‍

Three-dimensional printing technology has been used to recreate a lot of things – from jewelry and clothing to guns and even fruit. But, now, the revolutionary science can claim to have saved an innocent life from the throes of tracheomalcia, a condition that leaves the trachea so weak that even the slightest movement can make it collapse and cut off the ability to breath.
‍

In less fancy terms, Garrett was born with a hole between the lower chambers of his heart, which put extreme pressure on his lungs and caused his airways to collapse. In the meantime, Garrett struggled to breathe through tiny slits.
‍

Today, Garrett is breathing – even smiling – in front of everyone, thanks to a splint-like device created through 3-D printing that surgeons at C.S. Mott’s Children’s Hospital implanted to open up the child’s airways. Doctors say Garrett’s body will absorb the splint in the next three years while he recovers at home in Utah with his parents.
‍

He could go from being totally fine to turning blue sometimes – not even kidding – in 30 seconds. It was so fast. It was really scary.

As he does, Jake and Natalie Peterson can breathe their own sigh of relief. Diaper changing has gotten a little easier and a lot less dangerous.
‍

Garrett Peterson is just the second person whose life has been spared by a magical innovation that has the ability to build body parts out of dust. Engineered at the University of Michigan by Glenn Green, associate professor of pediatric otolaryngology, and Scott Hollister, Ph.D., professor of biomedical engineering and mechanical engineering and associate professor of surgery, 3-D printed hearts and lungs could very well be the shape of medicine to come.
‍

Science Fiction Brought to Life If body part and organ replication sounds like something from the realm of science fiction, 3-D printing doesn’t have to. Advances used in the mass production of medical devices are, in fact, more than just theory.

Those synthetic ideas and the challenges they present are up for discussion at the World Medical Tourism Congress Taiwan 2014, where Dr. Hollister will relate his experiences and the promise of 3-D printing during a keynote presentation on “Impacts of Advanced Technology in Medical Services,” a hot subject that has not only captured the imagination of Star Trek aficionados, but the world of healthcare as well.
‍

Taiwan, the world’s most dominating high-tech contractor since the 1980s, wants to get a leg up on the worldwide competition by developing 3-D printing technology. The island recently launched a three-year, US$2.33 million (NT$70) program to cultivate local 3-D printing, which combines high resolution imaging with computer-aided design

Using 3-D images could revolutionize the way we look –quite literally – at the way healthcare providers manufacture, distribute and modify medical and dental devices,” said Renée-Marie Stephano, president of the Medical Tourism Association®, at a press conference along with event organizers in Taipei. “But, as fascinating as the prospect of advancing health improvements through 3-D printing can be, public discussions like this can serve to recognize limits, and balance safety issues without compromising innovation.”
‍

Taiwan, the world’s most dominating high-tech contractor since the 1980s, wants to get a leg up on the worldwide competition by developing 3-D printing technology. The island recently launched a three-year, US$2.33 million (NT$70) program to cultivate local 3-D printing, which combines high resolution imaging with computer-aided design.
‍

The Ministry of Science and Technology said seed money to both academia and industry will be used to tackle issues related to output quality and production efficiency.
‍

Three-dimensional printing processes work something like inkjet printing of paper documents: the machines build objects by spreading microscopic layers of plastic or metal fused by lasers or ultraviolet light. Designers can create a computer model of the part they need and have a physical version with minutes.
‍

Wohlers Associates, Inc., a technology consulting firm, predicts the size of the global 3-D printing market will expand to US$10.8 billion by 2021, from the US$2.3 billion posted last year – a compound annual growth rate of 22 percent.
‍

In Germany, a company uses 3-D printing technology to make food. Actual real food that supposedly tastes good. Doctors have also nailed down the process of artificial vascularization through the use of 3-D printing, which has also been applied to auto parts and components, and aerospace and molding sectors.
‍

Despite those applications, devices created with 3-D printers for medical purposes have not yet been approved by the U.S. Food and Drug Administration for use in humans, which was of little help to Garrett, when the Peterson family learned of another baby with a similar breathing problem who was aided by a splint created from the technology.
‍

“We thought this could be Garrett’s chance of not only getting home, but also getting off a ventilator,” said Natalie Peterson, who, along with her husband, went back and forth trying to decide if the 3-D printed device was the right option.
‍

They stopped debating when Garrett’s condition then took a turn for the worse. His gut was shutting down from the high ventilator pressures. He had been in an intensive care unit for more than a month and was in critical condition. There was only one option. The Petersons decided to come to C.S. Mott Children’s Hospital.
‍

Hollister and Green applied FDA provisions for emergency clearance to recreate and implant a tracheal splint for Garrett made from a biopolymer called polycaprolactone. By integrating high-resolution imaging and computer-aided design, Hollister was able to make a splint directly from a CT scan of Garrett’s trachea and bronchi.
‍

Hollister and Green applied FDA provisions for emergency clearance to recreate and implant a tracheal splint for Garrett made from a biopolymer called polycaprolactone. By integrating high-resolution imaging and computer-aided design, Hollister was able to make a splint directly from a CT scan of Garrett’s trachea and bronchi. From there, Richard G. Ohye, M.D., head of pediatric cardiovascular surgery at C.S. Mott, stepped in to sew two devices around Garrett’s right and left bronchi and expand his airways.
‍

As he gets strong enough to breathe on his own for the first time, Garrett is on continually decreasing ventilator support, now at less than a quarter of the pressure previously needed. He’s also done short stints completely off the ventilator. Even if he needs some support for a little while longer, it’s low enough now that he can use a home ventilator and his gut is working again.
‍

“It is a tremendous feeling to know that this device has saved another child,” said Hollister. “We believe there are many other applications for these techniques, but to see the impact living and breathing in front of you is overwhelming.” About 1 in 2,200 babies are born with the severe tracheobronchomalacia and most grow out of the condition by age 2 or 3.

Tracheobronchomalacia is often misdiagnosed as asthma that doesn’t respond to treatment. Cases, like Garrett’s, are frightening, said Green. A normal cold can cause a baby to stop breathing.
‍

“Severe tracheobronchomalacia has been a condition that has frustrated me for years,” said Green. “I’ve seen children die from it. To see this device work, for a second time, it’s a major accomplishment and offers hope for these children.”
‍

The Petersons say they are full of hope for the future. Garrett’s smiles have returned. His parents are both amazed and thankful.
‍

“We needed to give him a chance and that’s what these splints have done,” said Natalie Peterson. “And now, he’ll show us what he can do.”