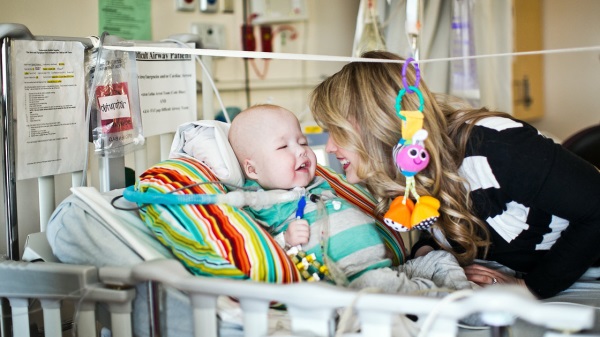 For the first 18 month of life, their son lay imprisoned to a hospital bed, tethered to ventilators, yet, prone to suffocating at any moment multiple times a day. What else could Jake and Natalie Peterson do? The condition of little Garrett Peterson was so tenuous that the young couple could not even hold him for fear of compromising his breathing.
‍

He could go from being totally fine to turning blue sometimes not even kidding in 30 seconds, said Natalie Peterson, 25. It was so fast. It was really scary.
‍

3-D printing technology has been used to recreate a lot of things from jewelry and clothing to guns and even fruit. But, now, after surgeons at C.S. Mott's Children's Hospital implanted a splint-like device to open up Garrett's airways, 3-D printing can claim to have saved an innocent life from the throes of tracheomalcia, a condition that leaves the trachea so weak that even the slightest movement can make it collapse and cut off the ability to breath.
‍

And Garrett's parents, who have since taken their son home to Utah for the first time, can breathe one big sigh of relief. Diaper changing just got a little easier.
‍

Printing replacement body parts does not have to sound like something from the realm of science fiction. Rather using 3-D techniques for the mass production of medical devices have, in fact, turned out to be more than just theory. Those ideas will be up for discussion at the World Medical Tourism Congress Taiwan 2014, June 26-27, 2014, at the Taipei International Convention Center.
‍

That's where Dr. Hollister will relate his experiences on bio-printing entire organs and body parts during a keynote presentation on Impacts of Advanced Technology in Medical Services, a hot subject that has not only captured the imagination of Star Trek afficionados, but the world of healthcare as well.
‍

Using 3-D images could revolutionize the way we look quite literally at the way healthcare providers manufacture, distribute and modify medical and dental devices, said Renée-Marie Stephano, President of the Medical Tourism Association, at a press conference along with event organizers in Taipei.

But, as fascinating as the prospect of advancing health improvements through 3-D printing can be, public discussions like this can serve to further balance safety issues without compromising innovation.

Taiwan, the world's most dominating high-tech contractor since the 1980s, wants to get a leg up on the worldwide competition by developing 3-D printing technology. The island recently launched a three-year, US$2.33 million (NT$70) program to cultivate local 3-D printing, which combines high resolution imaging with computer-aided design.

The Ministry of Science and Technology said seed money to both academia and industry will be used to tackle issues related to output quality and production efficiency.

Peter Huang, TIATRA President and CEO, said World Medical Tourism Congress Taiwan 2014 will offer opportunities for networking among the presenters — including Hollister and 15 healthcare industry experts from eight countries and regional medical tourism stakeholders to engage in a diverse span of topics including healthcare development and investment in Taiwan, medical tourism research, and healthcare free trade zones. For a complete list of speakers, go to: http://www.wmtctaiwan.com/speakers_year/2014-speakers/

To help facilitate the networking process, Huang said about 200 one-on-one business meetings have been organized and 40 exhibition booths will be set up on-site.
‍

Stephano said Taiwan already has quite an international following, one made up of travelers who want to taste the vibrant night markets, view the largest collection of Chines artifacts and art in the world, or check out a belly full of themed restaurants.
‍

Visiting Taiwan has taken on added meaning and is now, in part, defined by the international patients who are taking advantage of the strengths of a medical care system that boasts quality, inexpensive prices and hospitable service, she said. We call this medical tourism.
‍

Top-notch medical care that is not only readily accessible, but affordable is something we can all relate to and value, said Stephano. But, make no mistake: medical tourism in Taiwan is big business.
‍

Vice Health Minister Hsiu Ming-neng said the congress will not only be a great opportunity for Taiwan's medical industry to demonstrate its strengths, but also its competiveness.
‍

World Medical Tourism Congress Taiwan 2014 will also serve as a platform for the Medical Tourism Association to unveil its Taiwan Health and Wellness Destination Guide. Available in English and Mandarin in print and digital versions the guidebook is the first on a destination in Asia following similar Medical Tourism Association publications on Jordan, Las Vegas, and Miami. Stephano said the guide is designed to walk the patients through the decision-making process by providing information on how to choose a medical facility and what treatment is available.