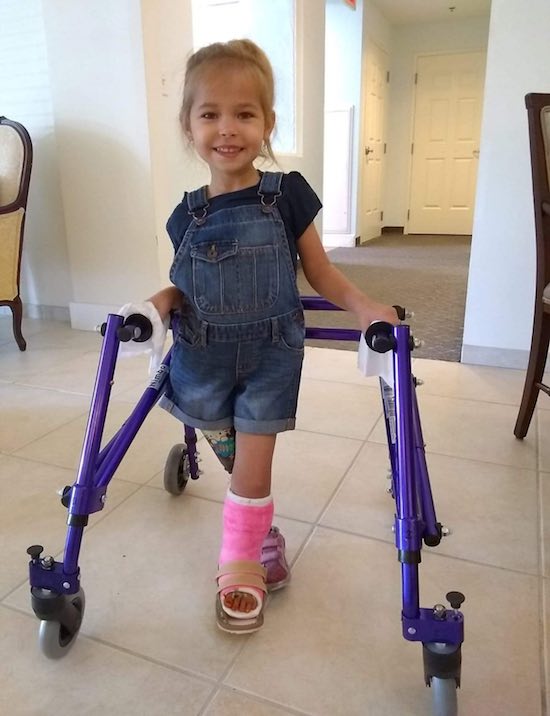 A three-year-old girl born with both legs backward finally takes her first steps after having surgery to correct the defects. This comes after the public helped her family to raise £180,000 to pay for the surgery.

Victoria Komada was born with a rare defect called bilateral tibial hemimelia, a congenital abnormality in which babies have both legs deformed, deficient, or absent. Victoria was not able to walk or even wear shoes as a result of this one-in-a-million deformity, impeding her chances of attending school.

It was when Victoria was born that her parents and doctors realized something was wrong. Her father recalled, "It was a big shock for us. As soon as she was born, we realized something was wrong with her legs. There was no sign on scans when Marzena was pregnant.” While it can be diagnosed as early as 16 weeks into the pregnancy via ultrasound, scans did not pick up Victoria's deformity.The condition can affect the left or right side, or both as in Victoria's case. Victoria's parents were desperate for a solution for their daughter to be able to walk properly

To find a lasting solution to this problem, Victoria’s family visited several doctors in their home country, Poland, who recommended a double amputation as the only solution to the anomaly.

However, after a careful search, Victoria’s parents – Marzena Drusewicz, 32, and Dariusz Komada, 41, contacted an American Surgeon, Dr. Dror Paley, at the Paley Institute in West Palm Beach Florida, who has a unique track record of successful procedures on children. He said he would be able to reconstruct one of her legs. Many patients and families arrive at the Paley Orthopedic & Spine Institute because they are not satisfied with amputation as the answer.

The next obstacle for the desperate parents was raising over £300,000 for the treatment. They set up a fundraising page online, and people from around the world helped them to raise £190,000. This was far from the needed amount, however, they pleaded with Dr. Paley to do the surgery with that money. Fortunately for them, he agreed. The family later traveled to America from their home in Norwich last July.

Dr. Paley then analyzed MRI scans of Victoria’s lower body and was confident he could carry out the year-long series of procedures. He told them that her left leg could be fixed and her right leg could be fitted with a prosthetic, which would lead Victoria to walk on her own two feet.

Victoria’s parents had to choose between correcting both legs – after which she will not be able to walk – or amputating the right leg and attaching a prosthetic limb if she must walk.

Victoria had her first operation on July 24th last year in a procedure that took close to nine hours. Dr. Paley amputated her right leg above her knees and placed pins into her left leg to which a fixator would be attached. In the months following this surgery, Dr. Paley and his team performed several follow-up procedures in which screws were inserted and twisted into the bones of her legs to keep reposition them.

Following these series of corrective procedures, Victoria had her second surgery done in November, in which Dr. Paley fused the bones of Victoria’s left leg together to strengthen the leg.

Just two days after her second surgery, Victoria started walking. "We were so happy when she took her first steps, we started crying," her mother said. "We were on the way to the car, and she said, ‘Mummy, can I show you something?’" She added, "Of course I was scared and did not know what was going to happen. But every week, she got better and better, and now she is not in any pain at all.” The mother said she was initially afraid of her daughter having the surgery. Now she’s thrilled about the way her daughter can move around without assistance. “She can now walk normally, and we can all start our life again now that we are home.”

Victoria and her parents finally returned back to their Norwich home last week after several months of physical therapy, two operations, and other treatments. Now, Victoria can walk properly and even run. However, getting to that point was no easy road, as Victoria’s parents recall long hours of pain and agony she went through for several weeks after the surgeries and during the physical therapy sessions.

Ms. Drusewics recalls that the weeks following each surgery left Victoria in severe pains; despite the pain medications she was placed on, the pain was unrelenting. Victoria had to endure several sessions of painful physiotherapy, without which she would not have been able to optimize the effects of the surgery.

Victoria’s parents were elated about the successful outcome of the surgery, revealing that she will now begin school in September. However, they noted that while they are happy she can now take her first few steps; a part of them still finds it hard to accept that her left leg is gone.

Medical literature has always recommended amputation as the gold standard treatment option for the type of bilateral tibial hemimelia Victoria was born with, but with this ground-breaking reconstructive surgery, double amputation was averted for Victoria.

Dr. Paley who performed both surgeries noted: “We achieved all that we said we would achieve on her. The reconstructed leg is very functional, she can walk and run and do sports now; She has had superb results.”

Dr. Paley has shifted the narrative from treating complex orthopedic deformities with amputation to reconstructive modalities. He has performed more than 100 advanced and innovative reconstructive procedures for congenital and acquired deformities of bone, joints and soft tissue.

The institute comprises several centers including the Hip Pain Center, the Joint Preservation and Replacement Center, Multiple Hereditary Exostoses (MHE) center, and the Cartilage Repair Center, providing specialized orthopedic care in those areas.  It also has an on-site rehabilitation department providing therapy for patients who have undergone surgery.

The institute has a clinical team of physicians, medical and physician assistants, physical and occupational therapists, and orthopedic technologists, who work together in one building – the Kimmel Building, located on the campus of St. Mary’s Medical Center in Florida.

Victoria’s reconstructive surgery is one of the groundbreaking surgeries performed by Dr. Paley and his team.

Looking back on their difficult journey to her little girl’s first steps, Drusewicz expressed gratitude for everyone who helped raise the money. “Thank you,” the relieved mom told the Eastern Daily Press. “Sometimes, there aren’t enough words to describe the appreciation.” In the end, the little angel got the miracle she deserved.