A New and Rarely Performed Technique to Correct a Dislocated Kneecap 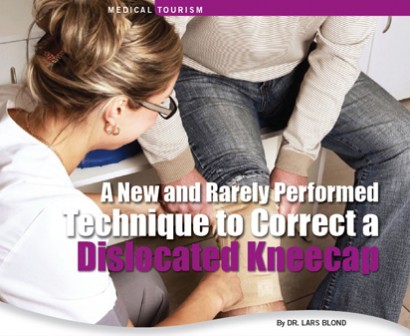 Patients troubled by instability of the dislocated kneecap have for many years been treated with various kinds of surgery and many have undergone a number of unsuccessful operations. This specific group of patients has previously been treated with skepticism and uncertainty from the doctors and has not been taken as serious as they should.

Now that this problem has been given more attention the arthroscopic trochleoplasty was developed to improve the outcome and reduce the pain level in this type of surgery. The insecurity caused by the kneecap popping in and out, significantly reduces the quality of living, so they refrain from recreational knee twisting activities. Besides many experience pain and naturally the insecurity influences their lifestyle and fitness.
‍

Nowadays most patients are helped by stabilizing the dislocated kneecap by either a transposition of the tibial tubercle or reconstructions of the medial patellofemoral ligament and in respect to the kneecap stability good results are obtained, however many still experience pain and it is well known that the development of arthritis is still a problem.
‍

The understanding of the biomechanics has increased substantially for the past years and today we know that the single most important factor for unstable kneecap is trochlear dysplasia. This means that the groove for the kneecap is missing.

Normally, individuals have a deep and concave groove to contain the kneecap; however 85 percent of patients with an unstable kneecap have a shallow, flat or even convex groove rounded outward. Since there is no bone to provide stability for the kneecap, one day the ligament on the medial side of the kneecap will rupture and the patella will dislocate.
‍

In order to aim normal anatomy in a more tailored way compared to previous surgical procedures, the trochleoplasty operation, where the groove is made deeper by a special technique, has become more widespread.

Still this type of surgery is regarded as highly advanced and only few orthopedic surgeons worldwide have mastered the demanding technique. The type of operation is quite extensive and requires fully opening the knee, giving the patient a long scar, a lot of pain and a long rehabilitation.

‍
After having done some of these operations in young individuals successfully, one specific patient’s reaction affected me seriously. She was very angry and even though she was happy with the results, she would not undertake the procedure in her other knee. She had been in so much pain the first night postoperatively.

She had been promised an epidural catheter, but the anesthesiologist had forgotten. After seeing her reaction I looked into other available techniques. I found out about the arthroscopic technique and the following year I did several experiments and together with Dr. Phillip Schöttle from Germany we developed the technique and a technical note was published in 2010.
‍

In 2008 the first patient “Mikkel” undertook the new arthroscopic procedure and he was exceedingly satisfied. Only three months after the operation he persuaded me to operate on his other knee. Because of his unstable kneecaps he had been unable to run since he was eight-years-old and previous operations had been unsuccessful.

He was 29 when he undertook the arthroscopic trochleoplasty in combination with reconstruction of the medial patellofemoral ligament and today he is again running and also pain free.
‍

Thirty knees have been operated with the new procedure and the results are very encouraging. The results obtained have been presented internationally and have been receiving a lot of recognition. A scientific paper is in review.
‍

The new technique has the advantages of minimal invasive surgery, with lesser scar formation, lesser pain and a shorter hospital stay. Some of the patients leave the hospital the same day and no one stays for more than one night. Contrary to what one might expect, it seems that the arthroscopic technique is less demanding for the surgeon as compared to open technique.
‍

Lars Blond is an orthopedic surgeon in Denmark, mainly arthroscopic surgeon doing knees, shoulders and elbows. Dr. Blond has a Certificate of Sports Medicine and is a senior consultant in a private hospital, he also serves as president of the Danish Association of Sports Medicine.