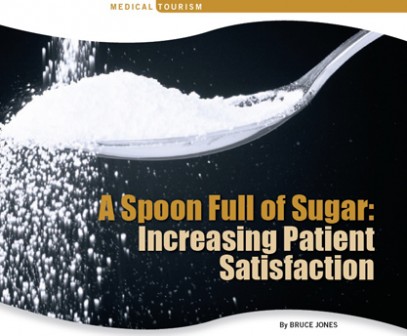 Disney has long been recognized for its approach to customer service. Time after time, Disney guests cite superior customer service as the reason they return to Walt Disney Parks and Resorts. The secret behind that reputation, though, is not just magic. We’ve worked very hard to create a culture that fosters cast member (Disney-speak for employee) engagement and trust. It’s that trust that leads to an exceptional customer experience, repeat business and solid financial results.
‍

Disney calls this a “culture by design” as opposed to a “culture by default.” Every organization has a culture, whether they realize it or not. It’s up to the leaders of the organization to determine what they want that culture to be, and then make sure it’s reinforced at all levels of the company.
‍

Through our work in healthcare, we have noticed that there are some common obstacles in regard to the patient experience. The first is in selection and hiring. Sometimes meeting the clinical needs of the organization doesn’t result in “right-fit talent”. The second is that too often orientation is, quite frankly, boring. Organizations miss an early opportunity to engage and inspire new hires and get them aligned with the organization’s vision, mission, and culture.
‍

Throughout a given day, each Disney cast member has multiple opportunities to provide a memorable customer experience. Disney’s culture of service excellence is what helps us succeed far more often than we fail.
‍

To find cast members who want to go above and beyond, Disney relies on a refined recruiting and training process. The process first screens for the right behaviors and attitudes among potential cast members, and then acknowledges positive behavior to reinforce it.

At the very beginning of training, Disney leaders tell cast members what’s expected of them and what the job entails – both good and bad. Cast members come away knowing the job won’t be easy all the time, but also with a sense of pride and commitment.
‍

Experiencing how Disney immerses their cast members in the company culture from the very beginning, helped ACH leaders understand how clear communication and a common purpose can help drive overall success.
‍

Following the session with ACH leadership in Orlando, the hospital learned that effective communication from leadership is essential in fostering a positive working environment on the front lines. They also developed a service theme to effectively capture and communicate their organization’s purpose: “Giving Care, Love, and Hope.”
‍

After nearly 10 years and a variety of follow-up sessions with Disney Institute, including training for physicians and nurses in late 2009, ACH boasts the following achievements:

You can’t manage what you don’t measure

One key reason the team at ACH has been successful is because they consistently measure employee and patient satisfaction. Many hospitals shy away from this practice because they fear the results, but you can’t manage what you don’t measure.
‍

Disney’s culture has been alive and well for more than 80 years, but it takes constant maintenance. Disney surveys cast members every two years or so. The surveys include sections where the cast member can anonymously rate his or her leader and provide feedback on what’s working and what’s not working.

Cast members also are frequently asked what motivates them – and Disney hears again and again that money alone is not it. Beyond fair compensation, what people want is recognition from their leaders and to feel pride in the work they do.
‍

At Disney, leaders at all levels of the company are reminded to focus on the positive work cast members are doing, and to avoid the all-too-familiar trap of holding on to high-performing cast members rather than offering them new opportunities.
‍

Cast members also are provided training, tools, and motivators to help them stay fully engaged. Disney cast members often get the same questions over and over every day. These questions can become tedious, and it would be easy for cast members to lose their patience and be short with guests who ask them.

A common question at the Magic Kingdom is, “What time is the three o’clock parade?” While this may seem to be a silly question, we consistently train cast members to listen and try to figure out what the guest is really asking. More often than not, the guest is looking for advice on where they can get the best view of the parade, or what time the parade will pass through a certain area of the park.

The suggestion we give clients is to consider their own “three o’clock parade” questions. The patient’s mom that’s driving the nurses crazy with questions or requests may just be scared. She may just need for someone to take her hand and reassure her that her caregivers are doing everything they can to help her daughter get well.

Disney works to establish an emotional connection with each and every guest. One way that Disney does this is by creating “Magical Moments” for guests – taking an unexpected opportunity to create a special memory. This can be as simple as a cast member noting something unique about a guest at one of Disney’s theme parks.

One way we help cast members do this is by giving guests birthday or anniversary buttons. These “Magical Moment” interactions, large or small, help create relationships that turn what could be a typical customer experience into a guest experience.
‍

Although a patient satisfaction at a hospital may not often be described as “magical,” hospital staff members have an opportunity to make an impact on patients and make an often stressful situation easier by establishing an emotional connection.
‍

When Orlando-based, 1,200-bed, Florida Hospital for Children saw that its facility ranked in the bottom 10 percent of hospitals nationwide based on patient and family satisfaction scores, administrators reached out to Disney Institute to help boost the hospital’s scores.
‍

Based on the Disney idea established by Walt himself, hospital staff began treating the patients and the patients’ families as guests. To increase interaction with patients and visitors, the hospital asked staffers not to use their cell phones while in patient areas (another Disney concept); employees were given baseball-type trading cards with their names and likes and dislikes to hand out to their young patients; and titles were also simplified – for example, “neurologist” became “brain surgeon.”
‍

The entire hospital staff ascribed to a new code of conduct, consisting of three simple, but often overlooked, basic principles:

It may sound simple, but if you consistently get those basics right, the overall culture will begin to shift. From broad smiles to sincere listening, the entire team at Florida Hospital for Children has transformed its culture. According to the Disney Institute team members working with the hospital, it’s largely due to the hospital’s leaders inspiring the entire staff.
‍

The results, less than a year after the Disney Institute training began, are meaningful:

As this example and Disney’s own culture reveal, it takes commitment from every level of an organization to impact the corporate culture. By choosing leaders who understand that cast members are the company’s greatest asset and take the time to communicate effectively with them, the organization will improve the chances that guests will have an exceptional experience. When leadership ‘walks the walk,’ then cast members will want to do the same. In turn, guests, patients, and visitors will experience the difference.
‍

Bruce Jones is the programming director for Disney Institute. In this role, Bruce oversees the team that develops engaging content built around the five topics that Disney is best known for – leadership, management, quality customer experience, brand loyalty, and innovation/creativity. A member of the American Society for Training and Development (ASTD), Bruce also holds a Master’s Degree in Business Administration. He resides in Florida with his wife and children.