Abuzz about Marketing: Stonehenge to the Stones 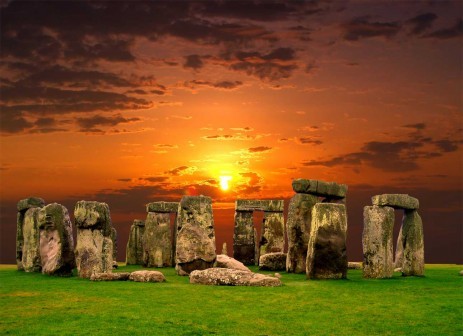 It’s all about Marketing.

‍
And it’s always been all about Marketing – even way, way back in the day. The Neanderthal who invented The Wheel thought he could sell it simply by rolling it out on the streets. Initially, it did sell well until another Neanderthal rolled out his Wheel

Since time immemorial, MarketingMan (EgoErectus Maximus) has been a shaman of sorts in sales, trade and worldwide commerce. No matter if the product was a wheel, a widget or international medical care, MarketingMan has always played a significant role – especially in competitive industries where other Neanderthals are trying to sell similar wheels and services with similar pricing. That’s when MarketingMan thumps his chest and earns his pay.

Let’s say your “wheel” is Medicine; let’s say you want to market worldwide; let’s assume your Product is excellent; your Outcomes are great and your Customer Service is out-freaking-standing! Let’s also assume you have a competitive price. What’s stopping you from dominating Global Healthcare? Competition, for one! Big, well-funded, motivated competition that has a nice set of wheels, too!

Every Country; every Hospital; every Tom, Dick and Hari Doctor has a shingle hanging out there in the international bazaar touting their care as the Best ever! EVERY single provider in the new marketplace of Medical Tourism says they have Good Outcomes; Good Service and a Good Price…Come on Down

OK, so there’s a lot of good Competition out there! What other barriers to sales success exist in the market? Confusion and Saturation! Providers from Singapore to San Salvador are using the exact same pitch to capture the attention of US consumers. At the same time, the “Good Price, Good Product and Good Service” pitch of other marketeers is bombarding consumers: Thousands of messages a day from Wheel Makers, Fast Food Chains, Drug Companies – even US Hospitals are all ‘pitchin the same pitch to reach the same customer. It gets confusing – especially when a sophisticated product like International Healthcare gets thrown in the Marketing Mix! Everyone begins to sounds alike and look alike to The Average Joe/Jane.

In addition, The Forces of Competition will always, over time, erode any early market advantage (such as a price point or service feature) until The Wheel becomes a stone; the stone, a pebble; the pebble, a grain disappearing onto the sands. Life’s a Beach!

With all that going on, how does a provider differentiate itself among all the competition to capture a LOT of business right out of the chute? How does a purveyor position itself above the noise that already exists in a noisy marketplace? With all the providers coming ashore in the US, how will they have an intelligent conversation with consumers about something so personal, so important, so Life and Death as healthcare – especially when all they’re shouting about is another Product, Price and good Service?

And what about the US Providers? Are they’re going to take all this competition lying down? They probably can’t compete on price, but certainly can on convenience and quality. Might they shift their paradigm and develop new products; monkey with the pricing; improve services? The Marketplace is going to get a LOT noisier!

So, it is all about Marketing, man. Whoever does it best gets results!

Clarke Professor of Social Science and Management at Claremont Graduate University Peter Drucker said: “Because it is its purpose to create a customer, any business has but two – and only two functions: Marketing and Innovation. Marketing and innovation produce results, all the rest are costs.”

Drucker’s uncomplicated view has focused the strategies of many a product developer in the last half century or so, and his words ring true today – especially for all those attempting to roll out their Medical Tourism wheel. Trouble is, Modern MarketingMan is frozen in a glacier with the same Stone Age pitch! What will free EgoErectus Maximus? Heat and Pressure from the Top!

CEOs who run health systems – like CEOs who run any business are interested in results They invented their wheel and now want sales! Trouble is, EgoErectus never drags ‘em back to the cave fast enough…

Last year, Chief Executive Magazine asked CEOs about Marketing: More than one-third said they were Unhappy with their company’s efforts – and 75% said they were directly involved in the process! Even high-profile CEOs like Michael Dell and Fred Smith of FedEx have dirtied their hands with Marketing these days – including promotion and management of the brand.

Competition is driving the trend, according to the Magazine, and brand management is becoming a bigger part of the management day for CEOs. “Good Brand Management is increasingly good for the bottom line, and can have a significant impact on shareholder value,” said Earl Taylor, CMO at the Marketing Science Institute in Cambridge, MA. (Now there’s an intellectual MarketingMan.)

Nicolet National Bank – a private business bank in Wisconsin – recently asked 500 CEOs and Business Owners about Marketing: 66% said Marketing was very important; 63% were “somewhat satisfied” with their Marketing efforts; just 20% were “very satisfied”; and a growing number said were going to “get more involved” in Marketing.

In addition to getting more involved, a growing trend among CEOs is a maniacal quest to measure and account for their Marketing expense. There’s not a CEO in the Nicolet Bank or the Chief Executive studies who hasn’t a hard eye on spending – and seeking a scientific approach to defend all those Marketing expenditures to The Board (and themselves, too). “I know half the money I spend on advertising is wasted, but I don’t know which half,” is the famous refrain from some CEO named John Wannemaker.

C-Level is definitely engaged on many levels of Marketing these days. Mismanagement of Marketing resources impacts shareholder value – which always gets a CEO’s attention! As CEOs becomes more and more involved in Marketing they will continue pressing for tangible ways to measure effectiveness. And if sales aren’t rolling, heads will be!

Michael Bina is a post Cro-Magnon,* New MarketingMan. He is Managing Director of a modern healthcare consultancy called: IntellectualMarketing. (The name is NOT an Oxymoron, and the methodology is way better than The Higher Apes.) * Wikipedia: Cro-Magnons lived about 40,000-to-10,000 years ago. Anatomically modern; differing from their modern descendants by a more robust physiology and slightly larger cranial capacity! Cro-Magnons must have come in contact with the Neanderthals, and are often credited with causing their extinction….but enough about me, how’d you like my article?