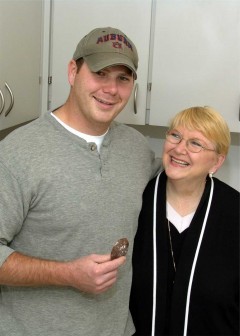 After struggling more than 15 years with cardiovascular disease, Carron Morrow had exhausted all conventional treatments for her failing heart. She came to the Texas Heart Institute at St. Luke’s Episcopal Hospital for the unconventional – the first FDA approved study using stem cells from a patient’s own bone marrow to treat heart failure.

“I had my first heart attack at 39, then the next one at 40. I had another one five years ago, and that was even after I had lost 135 pounds, was walking two miles and day and going to the gym. I felt great, and then bang,” said Carron.

After her first heart attack, Carron did some research and found a history of heart disease on both sides of her family. In her father’s family, three generations of males never lived past 50 due to heart attacks.

After her fourth heart attack last summer, Carron was put on the heart transplant waiting list. It was then that her mother and business partner, Lela Foshee, found an article about stem cells and started doing her homework. When she learned about the stem cell study being conducted at the Texas Heart Institute (THI), she wrote an impassioned letter to the Stem Cell Center asking for help for Carron. A month later, Carron arrived in Houston to be evaluated for the study.
‍

“Last October, I couldn’t say two words without having to take a breath – I was always out of breath. I needed a wheelchair to get around the hospital for my tests,” said Carron.
‍

Fortunately, Carron did meet the criteria to be enrolled in the study and the stem cell treatment was performed. The treatment involves harvesting bone marrow from the patient’s hip, processing the cells and injecting the stem cells directly into the heart through a special catheter.

“They handed me this little white envelope and my hands were shaking like a leaf. I pulled out the paper and there were two little words – stem cells! We all had a great cry,” said Carron. “This entire community, me, mama, my family – we are all so elated.”
‍

Carron is back to working 50 to 80 hour weeks in her event planning and catering business in Montgomery Alabama. She also takes the time to talk to local women’s groups about women and heart disease.
‍

“Every time I’ve had a heart attack, I’ve been in denial. I’d say, ‘I’ve just been working too hard.’ I had warning signs weeks prior to the heart attack and wouldn’t pay attention. Heart disease kills one out of two women, and after four heart attacks, I wonder what God has in store for me,” she said. “I was at the ‘waiting to die’ stage when I was first introduced to THI. Now I can walk three blocks without getting winded. I think it’s a miracle and I am truly indebted. This is a place of hope. I feel so blessed.”

The study in which Carron participated has completed patient enrollment and physicians hope to publish their results by the end of the year. Meanwhile, several other adult stem cell studies are underway.
‍

The Texas Heart Institute at St. Luke’s Episcopal Hospital is one of five centers selected by the National Institutes of Health to study stem cell treatments for patients with cardiovascular disease. The National Heart, Lung and Blood Institute will provide a grant of $33.7 million over the next five years to support the new national consortium called the Cardiovascular Cell Therapy Research Network (CCTRN). The network represents the first U.S. federal funding for adult stem cell studies in which patients are treated with stem cells taken from their own bodies.
‍

The Stem Cell Center at Texas Heart Institute is actively seeking patients for new clinical trials to treat patients with heart failure, those who have had a recent heart attack. and patients with peripheral vascular disease who have exhausted all other treatments for severe limb blockages and risk amputation.

For more information, visit our website at www.texasheart.org/stemcell. You may also contact the Stem Cell Center at  832-355-9404 or by email at stemcell@heart.thi.tmc.edu