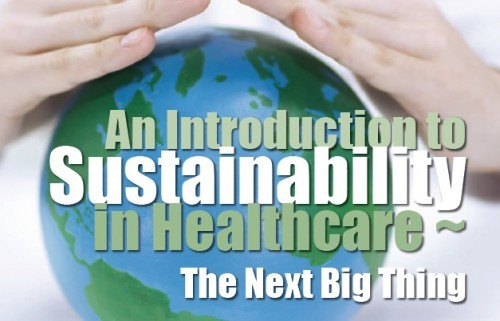 An Introduction to Sustainability in Healthcare ~ The Next Big Thing

Sustainability in Healthcare is the new trend all across the globe. In fact, there is now a LEED certification being developed by the US Green Building Council that is specific to the healthcare industry and adheres to their unique design needs.

Once gigantic waste powerhouses, hospitals are now changing their tune, and those who aren’t on the environmental bandwagon are quickly jumping on. Hospitals have historically been the heavy hitters of industry when it comes to environmental degradation, but they are stepping up and doing something about it, in pretty big ways.
‍

By definition, sustainability has many meanings, which are all significant in their own right. The most recognized version is from a 1987 UN conference, stating sustainable developments are those that “meet present needs without compromising the ability of future generations to meet their needs”(WCED, 1987) . In the words of the Iroquois Indians, “What about the seventh generation? Where are you taking them? What will they have?”.

This is the essence of sustainability. It involves accountability, planning and foresight, and it must take place in every industry, at every level, and by every individual. In fact, many hospitals began their green movement with the ambition of only a few employees, who began recycling to reduce waste.
‍

Medical Tourism and the Environment

When we look at the healthcare system as a whole, we see mass waste. On a similar note, when we look at the tourism industry, we see much of the same, albeit on a slightly smaller scale.  However, if we consider the tourism industry as a whole, we must look at airlines and hotels, and the two of these produce massive amounts of pollution and waste. With medical tourism, we are seeing the melding of these two worlds and together the combined total waste is monumental.

Many issues must be taken into consideration, including, water efficiency, air and energy pollution, materials and resources, and indoor environmental quality; these all relate to both industries. The healthcare industry has to tackle healthy foods, training of staff, waste reduction, including recycling and reuse contaminant disposal, green cleaning agents and creating healing places, among many others.

The tourism industry needs to ensure airplanes are emitting the lowest carbon offset possible. A recent study by the US Department of Transportation, Eurocontrol, the Manchester Metropolitan University and QinetQ, found alarming carbon levels contributing to Global Warming.  According to the study,” airlines are spewing 20 percent more carbon dioxide into the environment than previously estimated and the amount could hit 1.5 billion tons a year by 2025.”
‍

“Growth of CO2 emissions on this scale will comfortably outstrip any gains made by improved technology and ensure aviation is an even larger contributor to global warming by 2025 than previously thought,” said Jeff Gazzard, a spokesman for the Aviation Environment Federation.

Airlines are exempt from the Kyoto Protocol, and yet they are stating that they have been working on improving fuel efficiency, which will in turn reduce the amount of carbon emissions. The economy and the rising costs of fuel, however, are proving barriers to using fossil fuel and are making it difficult for airlines to comply with higher environmental standards.
‍

The other aspect of tourism, hotels and resorts, face many of the same sustainable issues as hospitals, as stated above. In fact, Green Globe has been instituted as an international measure of sustainability for the travel and tourism industries and has offered certification since 1993. Green Globe originated from the Rio Earth Summit of 1992, Article 21 Plan, “which provided a set of principles for local, state, national and international action on sustainable development,”.

Eventually, Article 21 became Agenda 21 for the Travel and Tourism Industry: Towards Environmentally Sustainable Development, which highlighted ten areas in which the travel and tourism industries could take action.   In addition to the aforementioned areas, they also listed the following: transport, land-use planning and management, and management of freshwater resources.
‍

Hospitals Get a Rude Awakening

When the US EPA issued a report which was a wake-up call to many hospitals, shockingly they were rated the top emitter of dioxin emissions into the atmosphere.  One of the main sources: medical waste incinerators.  It was discovered that hospitals in the United States were the biggest waste producers out of any industry. Hospitals immediately began operational overhaul on a massive level to begin altering this obvious wrong.

It goes against everything hospitals stand for: doing no harm. In fact, environmental toxins, which are produced in large quantities by hospitals, are now being linked to the very medical problems which land people in the hospital in the first place; asthma, birth defects, childhood brain cancer, leukemia and infertility. (6) Nicholas DeDominicis, executive vice president of energy solutions for Practice Greenhealth, was quoted as saying that “According to the Environmental Protection Agency, (EPA), hospitals are the “second-most energy-intensive commercial building type,” second only to the food service industry.

To really put a face to the name, he went on further to state that hospitals use “836 trillion BTU’s of energy annually and have over two-and-a-half times the energy intensity and carbon dioxide emissions of commercial office buildings – over 30 lbs. of CO2 emissions per square foot.”
‍

What, exactly, constitutes “green” when it comes to healthcare? Some of these were mentioned in a previous paragraph, but it’s important to reiterate and explain in a little more detail. Well, according to a report compiled by the World Health Organization and Health Care Without Harm, there are seven facets of an environmentally-friendly hospital.  These include “energy efficiency, green building design, alternative energy generation, transportation, food, waste and water,” (6). These are outlined in a little more detail below.
‍

7 Elements of a Green Hospital – WHO/HCWH

So, how is the healthcare industry coping with this and what precautions are they taking to prevent any future damage as well as reverse the current problems? What systems are being replaced by more environmentally friendly ones?  These are all issues we will explore in this issue, and ones we will continue to expound upon, as an environmental war rages against pollution on a united global front.
‍

It was only back in 2000 that the US Green Building Council (USGBC) began promoting its Leadership in Energy and Environmental Design (LEED) standards. Since then, “green” terms have taken off, including energy efficient, green power, renewable resources, eco-friendly design, environmentally-friendly design, green construction, resiliency in design, durabaility, and of course, perhaps the most recognizable, sustainable.

This same trend that took off with schools, and office buildings, and even homes, has now begun on a massive scale in the healthcare industry. As previously stated, there is a system being developed specifically to measure healthcare facilities, which looks at their distinctive environmental impact.
‍

According to Courtney Lorenz of Skanska USA, the LEED for Healthcare Green Building System will assess healthcare facilities in a way which takes into account “design issues and conditions specific to the health care industry”, based on their operating systems in place.

This system “addresses issues such as increased sensitivity to chemicals and pollutants, traveling distances from parking facilities, and access to natural spaces.”  It makes sense, because many hospitals were having issues being approved for certification, because they were being measured against office buildings, and the two simply operate on very different levels.

Hospitals are going to consumer more water, require more energy in operation mode, which is 24/7, and have different needs when it comes to waste and recycling due to dealing with harmful wastes, than normal office buildings. Therefore, they should be judged on very different platforms.

According to the USGBC, the LEED for Healthcare draft rating system will be released for a second public comment within the next few months, and if that is approved, it will go to USGBC Membership for ballot and only then will it be available for public use.
‍

Perhaps one of the most profound environmentally-friendly companies in healthcare, Kaiser Permanente, has easily achieved what very few have been able to. They are pioneers, if you will, in the green building movement of healthcare facilities, and in fact, began getting involved with sustainable building practices back in the 70’s, when employees began forming “green teams”.

In 1997, they joined forces with 473 organizations in more than 50 countries to form Health Care Without Harm, a global partnership united together to protect the health of those in the healthcare sector.
‍

So, how exactly does one qualify as a “Sustainable” hospital or medical facility? Well, the transformation does not happen overnight and it definitely takes a lot of planning and foresight, but it proves well worth it in the long run.

In fact, it is estimated that making these changes, even on a smaller scale, can improve efficiency by as much as 30% when investing in green energy practices.( 7).  So, although hospitals may have to tough it up and front a high initial investment, this should more than pay off down the road, mainly due to lower utility costs.
‍

These are the main categories that are considered prior to achieving LEED certification for buildings (not healthcare facilities specifically):

The sustainable site measurement encourages building on already developed land, focuses on keeping construction pollution to a minimum and minimizes a building’s impact on ecosystems and waterways, among other guidelines. As far as water efficiency, that category speaks for itself, but essentially, it states that the most efficient water practices will be adhered to, both inside and outside the building.

According to the USGBC, the US Department of Energy stated that building use 39% of energy and 74% of the electricity produced each year in the US; this is a staggering amount. The energy and atmosphere category covers a wide range of energy practices to reduce consumption of energy and include efficiency in design and construction, efficient appliances, systems and lighting and the use of renewable resources.

During construction and afterwards, once the building is up and running, many buildings are apt to using quite a bit of resources and materials and create a huge amount of waste. The materials and resources category includes recycling and reusing products, and encourages sustainably, local products and materials; it looks at a product’s source in diminishing waste.

Improving indoor air quality can be done in many ways, including providing access to natural daylight, which can be done by building a roof made of windows and plants, and having access to many windows throughout the facility.
‍

The New Construction (NC) standards, the newest certification standard, are the following: Certified, Silver, Gold and Platinum.  Only one hospital in the world has received Platinum certification, and that was Dell Children’s Medical Center in Austin, Texas, in 2008. .

However, many hospitals are following suit and many will beef up their sustainable practices in order to compete on a global scale with others who have practices already securely in place.
‍

Where Are We Headed?

The healthcare industry, as stated previously, is a huge player in the deterioration of the environment and will have to take gigantic steps in order to right past environmental wrongs and change the face of healthcare. No longer will hospitals be looked at as the black sheep of businesses by global environmental groups, but rather as leaders in the fight against environmental degradation and destruction.

The steps already being taken by various hospitals around the globe are evidence of this trend, which is causing others in the industry to reshape their best practices and look more closely at how they can lessen their impact on the environment. Those who have yet to catch up are more than likely researching LEED certification as I write this, and looking for ways to implement sustainability in their hospital.