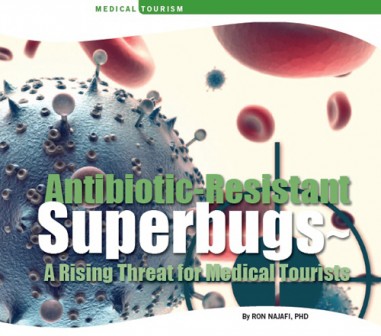 The rise of multidrug-resistant superbugs poses a growing threat to populations worldwide including those who travel overseas for medical treatment. Alleviating the problem may require the use of novel synthetic antimicrobial molecules specifically designed to mimic the body's natural defense against infection.

‍Those planning travel overseas for medical treatment naturally expect to return home healthier than when they set out. Yet with increasing frequency health authorities in several countries are reporting a development that puts medical tourists at grave risk. This is the rise of new varieties of bacteria with resistance to nearly all known antibiotics. Here we will briefly describe these particularly virulent types of bacteria assess the extent to which they are being spread by international travel and propose ideas for curtailing their further advance.
‍

NDM-1 AND ITS SUPERBUG COUSINS

Recent media reports have shared stories of NDM-1 (New Delhi metallo-beta-lactamase) a gene carried by bacteria that alters them and makes them resistant to almost all known antibiotics. It can manifest itself in many different ways and is often found in bacteria such as K. pneumoniae which can invade the lungs and E. coli commonly found in the digestive tract triggering conditions such as urinary tract infections and pneumonia.

What makes bugs such as NDM-1 so serious is that they are known to be resistant to the carbapenems often the last good antibiotics active against bacteria that already were resistant to more standard drugs. Even worse their advent comes at a time when many pharmaceutical companies are curtailing the search for new antibiotics in favor of more lucrative product lines.The November 18 2010 issue of the journal Eurosurveillance focused exclusively on superbugs and how they are affecting healthcare around the world.

In an editorial Dominique Monnet of the European Center for Disease Prevention and Control who has studied how NDM-1 is spreading in Europe notes that dealing effectively with superbugs will require the joint efforts of researchers and healthcare providers in many nations. Also vital will be a concerted awareness campaign focused on the transmission of bacteria as well as such issues as the overuse of antibiotics a point to which we will return below.
‍

Some 77 cases of NDM-1 have now been detected in 13 European countries including Britain France Germany Spain and Italy from 2008-2010. About two-thirds were in Britain and seven of the infected patients have died. Despite news reports in 2010 of three cases in the United States NDM-1 is not yet widespread in that country. Yet carbapenem resistance has been a problem in the US for about a decade according to researchers at the Antimicrobial Resistance and Characterization Laboratory of the US Centers for Disease Control.

Some researchers fear the global spread of NDM-1 could be accelerated by medical tourism. (In fact NDM-1 was first identified in 2008 from a patient repatriated to Sweden after treatment in a hospital in New Delhi India.) As reported by M.J. Streulens et al. in the November 18 2010 issue of Eurosurveillance of the 77 cases referenced above 55 have a recorded travel history and 38 of these 55 had a link either to the Indian subcontinent or to the Balkan region.

It appears that the majority of these cases were admitted to foreign hospitals due to an illness or accident that occurred during the journey although a minority were traveling for medical tourism. Some researchers are calling for incoming hospital patients to be screened for superbugs if those patients had previously received healthcare in countries known to have hosted cases of superbug infection.

Additionally it has been proposed that such patients be isolated in single bedrooms and behind barriers for the extent of the screening period with isolation continuing if they test positive for superbug infection.
‍

THE ROLE OF REFORMS AND NEW TECHNOLOGY

What can be done to arrest the progress of superbugs and extend the functional life of our antibiotic arsenal? A set of proposals follows.First we must stop and assess the use of antibiotics as additives to the feed of our farm animals and specifically prevent the unnecessary use of antibiotics in animals that are not sick. This is an important part of making the public more aware of the excessive use of antibiotics and the associated potential health risks.

Sub-lethal quantities of antibiotics are known to create an environment for the development of resistance and multi-drug resistance mechanisms. The fast replication cycles of bacteria coupled with the mistakes made during replication give these pathogens a Darwinian advantage in responding to and overcoming antibiotic drug pressures.

We need to monitor the fate of all the mega-quantities of polysporin Neosporin and Bacitracin that are consumed off the store shelves: do they end up in our wastewater systems and landfills and become a breeding ground for new superbugs? What happens to the groundwater runoff from farms sewage systems and landfills?Third we must undertake more research to provide us with safe and effective antibiotics utilizing new mechanisms without the development of resistance.

A new class of agents is being developed with a novel mechanism of action that kills pathogens without showing resistance. Such compounds mimic the human bodys own natural defenses against infection. Since our immune system works without ever creating resistance there is great potential for studying the effective and rapidly acting molecular defenses that function within us and creating stable analogs of these molecules.

Unfortunately developing additional antibiotics in existing classes of compounds that are showing drug resistance may not help. This is because bugs that have developed a resistance to a member of a specific class of drug can apply the same resistance mechanism to the rest of that class. Resistance mechanisms can also be transferred to other bacteria making the resistance issue a larger problem.

Fourth when we attack bacteria with agents targeted against one particular cellular mechanism the bugs simply mutate that mechanism to make it resistant and then pass the mutation around until all bugs are resistant and the agent is useless. This will always be true of targeted agents so we need more of these agents every few years and limiting their use in agriculture (including aquaculture) is a great idea.

We urgently need a parallel initiative in the development of multi-target agents that attack so many targets that the bugs cannot sidestep them. All bacteria are susceptible to phenol and chlorhexidine even though these compounds have been used since Florence Nightingale. The trick with multi-target agents is to make sure that the human host is not one of the targets. Consequently we need subtle agents that attack multiple bacterial targets while being non-damaging to human tissues.

Finally we should encourage and incentivize the pharmaceutical and biotech industry to develop safe and effective non-antibiotic anti-infectives that could replace all topical antibiotics for eyes skin ear over-the-counter antibiotics etc. Once a topical antibiotic develops resistance that resistant gene will find its way into all sorts of bugs. Bugs love to share survival mechanisms.

Overall we need to understand the sources of antibiotic resistance—whether it originates in farms sewers landfills or other locations—and find ways to save our precious few antibiotics for systemic blood-borne infections. We also must aim for appropriate use of antibiotics in humans and in our farm animals have a better understanding and guidelines for infection control and strongly encourage antibiotic stewardship. Otherwise the overall result will be fewer effective drugs to treat bad bugs.

As discussed above those who are planning overseas travel for medical treatment ought to be aware of the advent of superbugs and the havoc they are capable of causing as they spread from country to country. Although the sheer scope of the problem is intimidating it might ultimately be resolved through the reform of a range of current practices such as the curtailment of excessive antibiotic use.

Additionally the development of non-antibiotic antimicrobials may advance treatment options beyond any in wide use today. Antibiotic-resistant superbugs may loom large as a concern for medical tourists but they are one that wise choices and new technology can overcome.

Ron Najafi PhD is chairman and CEO of NovaBay Pharmaceuticals Inc. an Emeryville CA-based biotechnology com¬pany developing anti-infective compounds for the treatment and prevention of antibiotic-resistant infections. He can be reached at rnajafi@novabaypharma.com.