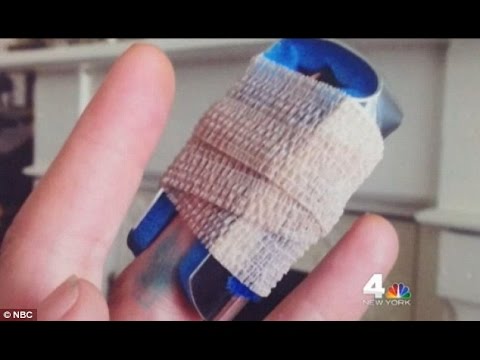 Talk about adding insult to injury. A U.S. hospital has blood on its hands after charging a New Jersey teacher $8,775 to bandage a cut finger.

That's the bill Baer Hanusz-Rajkowski got after he left the Bayonne Medical Center emergency room earlier this year with a tetanus shot and a bandage on his right digit finger.
‍

No one has to tell Hanusz-Rajowksi or the likely collaborators the hospitals and insurers that battle over rates or the lawmakers who throw their hands up in frustration — that the U.S. healthcare system is bleeding and in need of more than a stitch. While all shareholders are quick to point blame, they are just as slow to come up with a consensus to repair it.
‍

Despite even the best intentions of the Affordable Care Act, Americans continue to find themselves at odds with access to care that they can truly afford. But, the confusion and costs that vary widely from one hospital to the next are spawning a new breed of patient, one that is willing to look beyond state or national boundaries to destinations that offer health services that are both readily accessible and economically feasible.
‍

Close to 1 million Americans will pull out their passports this year and travel overseas for medical tourism procedures and treatments, most of which are elective, but wide ranging from dentistry and comprehensive health checkups to hip replacements and organ transplants.

For the most part, the quality of care is comparable to what they will receive in the United States. Beside the top-notch care from accredited international hospitals and doctors, medical tourism also boasts substantial savings in some cases, as much as 70 percent. That distinction is beyond compare.
‍

Count patients like Joy Guion among them. Even though the North Carolina native and employee at HSM wasn't accustomed to traveling overseas — let alone for medical care — she was lured by a sun-soaked destination, four-star hotel with a personal concierge and a local driver and, most provocatively, a surgery that would reverse her severe chronic obesity.
‍

To keep her company on her first plane trip, HSM even sent Gary Harwell, a retired manager and former colleague who needed knee replacement surgery, along with her. Here's the kicker: both employees didn't have to pay a dime for their surgeries not even travel expenses or post-op recovery. HSM, a self-funded employer of 2,500 U.S.-based employees and member of the Medical Tourism Association, picked up the tab.
‍

What's more, Tim Isenhower, director of benefits at HSM, says as an incentive for employees to get onboard with medical tourism, his company even waives copays and deductibles, and covers travel expenses for both the employee and a companion.

To employers like HSM, the math makes perfect sense. In the United States, the same knee replacement would have cost more than $59,000. In Costa Rica, the procedure costs half that amount, at $23,531. In North Carolina, Guions gastric sleeve surgery would have cost about $30,000, but in Costa Rica, the procedure comes to $17,386. So, when the bandages came off, both Guion and Harwell received a bonus check for at least $2,500 from HSM, or up to 20 percent of the savings the company enjoyed in insurance costs — healthy and happy employees indeed.

What's the catch? There isn't one. HSM saves money, about $10 million in healthcare costs in the past five years. Close to 250 of HSMs employees have traveled abroad for medical tourism procedures, and Isenhower, who conceded there was fear in the eyes of those he first approached with traveling to other areas of the world for medical care some six years ago, says more are scheduled to go.

‍(Their case study was featured on segments of ABC's World News Tonight with Diane Sawyer, and later on Nightline following a consolidated effort of the Medical Tourism Association and the employer and healthcare provider, both MTA members, to bring the story to international recognition. To watch, click here.)

Stories like that bear witness to what employers and their employee-turned-patients can accomplish when unleashed from the trappings of a healthcare system frail with perverse incentives toward reducing the cost, quality and accessibility of medical care. Other accounts yet to be designed, but eager to be conceived will be crafted at a live interactive patient-dedicated webcast during
the 7th World Medical Tourism & Global Healthcare Congress, Sept. 20-24, 2014, in Washington, D.C.
‍

Ask a Patient: Making Dollars and Sense Out of the Medical Tourism Experience, will connect real and active healthcare consumers who know best about what they want and deserve from health travel to the hospital administrators, doctors and clinicians, facilitators, insurance executive and hospitality and travel interests that make medical tourism happen.
‍

The interactive webcast, a partnership of the Medical Tourism Association and EscapeArtist, Sept, 23, 2014, at the Gaylord National Resort and Convention Center, will stream questions and answers from all over the world. Healthcare providers will see them, hear them, and talk to the patients in an open forum that is bound to personally touch the lives of all, both profoundly and — most importantly — immediately.
‍

Patients can compare treatments and providers can bounce ideas about their peers to solve health and travel complications most on the minds of international healthcare seekers, said Stephano. This is an opportunity to distinguish destinations, to ask the questions that matter and make the medical tourism experience better — for both patients and providers  through sharing, support, and research.