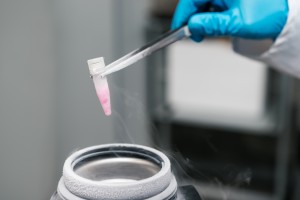 Scientists in Israel working with a team from Cambridge University have successfully created embryonic cells that give rise to sperm and ova in a test tube. The medical breakthrough, researchers at the Weizmann Institute of Science believe, might someday help tens of millions of people who can't start families.
‍

Infertility issues are an obstacle to parenthood for one in six couples representing all ages, ethnicities and backgrounds, but who all share the common goal of one day starting a family.

Some of these hopeful parents, a good deal who don't understand their personal fertility and the factors that affect their chances to have children, will visit the Malo Clinic in Lisbon, where an agreement earlier this year with Ginemed — headquartered in Seville, Spain — has given birth to an International Center for Assisted Reproduction to meet the needs of both Portuguese and medical tourism patients worldwide.
‍

Malo Clinic has a very strong research and development area, said Fernando Sanchez, clinical director of Malo-Ginemed. Together, we have created a center of reference in the world.
‍

Sanchez said the combined efforts will enable new-found pregnant Portuguese women and medical tourism patients to return to their regular gynecologist for monitoring and treatment as if the artificially-developed embryo had been conceived naturally.
‍

Birth rates lag in Europe and to a lesser extent in the United States — but the desire for children does not. Europe leads the world in assisted-reproduction treatments, initiating approximately 55 percent of all cases, accord to the European Society of Human Reproduction and Embryology. In 2011, the latest year for which figures are available, 588,629 treatment cases were reported from 33 European countries.
‍

Infertility in Portugal affects half-a-million couples or 15 percent of the population of reproductive age. Internationally, the number of treatments performed in many developed countries has grown by 5-10 percent annually in the last few years, but that rise is now showing signs of slowing.
‍

Increased opportunities for medical travel and lower cost, combined with easily accessible information across the internet about what is available and a desire to avoid regulation or legal constraints within their borders, has driven some couples to look abroad for solutions to their infertility.
‍

The Malo Reproductive Unit features the latest technology in assisted reproduction including a cryopreservation closed system created by Ginemed and the University of Seville. Instead of the traditional semi-open straws, the closed system, dubbed SafeSpeed, provides additional security in the conservation of gametes eggs, sperm and embryos — eliminating direct contact with liquid nitrogen and the risk of contamination by maintaining survival rates and fertility.
‍

Malo Clinic is set to open a new brand of low-cost dental clinics across the 28 countries the Portuguese outpatient healthcare group
is already in. The global expansion began five years ago and now includes facilities from Angola to China and Colombia to Poland.
‍

That's good news for the Lisbon Tourism Board, an arm of the Visitors and Convention Bureau charged to collaborate with the Medical Tourism Association to raise the profile of medical travel to Lisbon. There already a growing number of patients who are ready and willing to travel abroad for medical tourism procedures at facilities like the Malo Clinic, which beyond assisted human reproduction techniques features health and wellness treatments from spa therapies and dentistry to cosmetic surgery and now an IVF clinic.
‍

Some 650,000 patients from the United Kingdom, alone that's twice as many as a decade ago are traveling abroad to avoid hospital waiting lists, which have grown to a six-year high and have resulted in delays for treatment of upward to six months, according to the National Health Service's Office for National Statistics.
‍

But that's not the only why of it. Wealthy British seniors are leaving behind demanding jobs to retire in Portugal, where the country's mild climate and low cost of living about 30 percent less than in the United Kingdom plays a role in their decisions.
‍

Here I have a life without stress, I do yoga and go for long walks with my dog, said Sally Kerr, who moved to Portugal two years ago and ahead of her husband, David, who flies out from England on weekends to visit and will eventually join her once he retires.
‍

This peaceful haven has become more attractive to wealthy Europeans since the Portuguese government exempted taxes for the first 10 years on the pensions of private sector retirees who chose to make Portugal their new home.