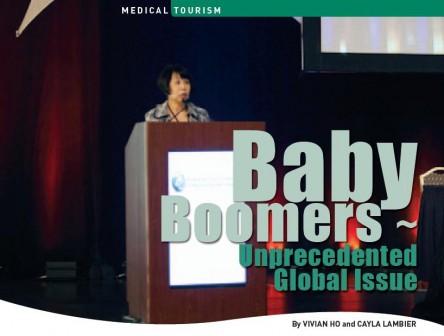 At this year’s World Medical Tourism and Global Health Congress, keynote speaker Dr. Jeanette Takamura, Dean of the School of Social Work at Columbia University, cast Baby Boomers in a global light while discussing what role medical tourism might play as the world’s population of Baby Boomers begins to hit the age of 60.

Technically speaking, a Baby Boomer is anyone born within the year span of 1946 to 1964. Generally speaking, they are our parents, our teachers, our CEOs and our politicians. Doctors, bus drivers, novelists or celebrities – there is not one demographic, occupation or personality type that does not include at least one, if not several dozen, Baby Boomer by definition.

“What makes the baby boomers so interesting is that there are 76 million of them,” Columbia University Dean of the School of Social Work Dr. Takamura said, “and the fact is, they all are different.”

According to her, being healthy means something entirely different to each and every individual within the Boomer generation and their healthcare needs will never be met as a whole. Each person is different, each segment of this generation adheres to different concepts and each social class has different needs. Consequently, products cannot be delivered in a one-size fits all for this eighteen year-span generation. “Those who are born in 1946 knew well the music of Mick Jagger, and those who were younger, really don’t consider Mick Jagger their musician.”

The aging process for Baby Boomers will be unlike any other generation before them, according to Dr. Takamura, largely due to rapid globalization, medical advancements, healthcare reformation and the unfortunate presence of degenerative diseases like Alzheimer’s and cancer. And in general, the top five factors affecting all generations where the aging process is concerned include chronic disease, prevention, education, mental health and physical activity.

“Over time we will see aging enriched by multicultural perspectives,” Dr. Takamura said. “As we see a more rapidly aging population, we will also see more cancer and more healthcare costs coming heavily out of pocket.” In the case of medical tourism, costs associated with this phenomenon will be mostly out-of-pocket. Not just for those who want surgical procedures for improvement, such as cosmetic surgeries, but also for those who are born with deformities, who are able to travel to countries that can assist them.

Truly understanding the implications of globalization as the force majeure’s impact on our world is a long path but health tourism, in terms of medical travel, may be a good option for Baby Boomers.
While the 21st century will be primarily considered the century of the developing world, Dr. Takamura espoused a number of key concerns over global aging as a whole. More people are living longer, which is often a sign of high quality of care within a country, therefore being older in larger numbers over a longer period of time is another matter.

Approximately two billion persons will be 60 years of age or more by the year 2050. Retirement pensions are shrinking while the full retirement age and the healthcare costs are increasing. Today, governments from all over the world are looking at the Baby Boomer generation with pride, apprehension and perplexity. Pride as long life represents a form of national achievement, apprehension as to the implications for a nation, and perplexity as to how to solve this universal trend.

According to Dr. Takamura, we may tend to think of aging as one broad phenomenon. However, for example, one aspect of aging we do not often pay attention to is the gendered nature of old age and aging. “We ought to remember that women tend to out-survive men, and that about 55% of elderly people globally are women.” From the perspective of a work environment, it is not an advantage for women to look older in the work place, like it can be for men. This unfortunate dynamic which is part of an aging trend, that of living longer and working longer into the sunset years, though, is beginning to creep across gender lines and we are seeing a great number more of older men elect cosmetic surgery procedures as well.

“As we see transformative changes occurring globally, this demographic reality – the longevity revolution that has been emerging over the last several decades will have profound implications for the medical tourism industry,” Dr. Takamura said.

In terms of looking at ageing and potential medical tourism opportunities, according to Dr. Takamura, it is important to gather evidence based information as to what the elderly want. More and more people in a variety of industries will need to work ever more closely with scholars and researchers who are doing groundbreaking research in universities. In both research universities and teaching universities as well, there is value to be gained from examining evidence based information. Because, to thrive in any industry, as in the case of healthcare services, working hand in hand with partners to understand clients’ needs is essential to fully satisfy any target market; boomers or otherwise.

In terms of representing the needs of boomers and the aging population within the hospitality industry; cruise ships are currently doing a better job than airlines today and some hotel chains with a focused eye on their respective target markets are skyrocketing to the top within their industry in terms of quality of services. With respect to senior living communities, in the U.S. or abroad, the more home-like the environment and surroundings, the better this is in attracting and retaining this market segment.

“Those nations with medical tourism professionals who understand the distinctive interests, needs and capabilities of older travelers will be rewarded with their enthusiasm and loyalty,” Dr. Takamura said.

Cayla Lambier is a recent graduate of Washington State University and possesses Bachelors degrees in both Communication, with an emphasis on journalism, and English. She considers herself to be an incredibly versatile writer, with several years of professional experience ranging from reporting and magazine editing, to public relations and technical writing. Cayla is currently engaged as an editorial intern with the Seattle branch of Where Magazine and as a freelance staff writer for Medical Tourism Magazine.

Vivian Ho is President of AGHP, a 501c3 that works on global health philanthropy ventures. She also serves as Managing Director, Asia Pacific for MTA, and Co-Editor of MTA’s health tourism e-magazine. Prior to this, Vivian was President & CEO of Queens International in Honolulu, Hawaii building Hawaii’s medical travel & health tourism initiative. She currently advises on country, sector and organization initiatives in Medical & Health Tourism. She may be reached at Vivian@ MedicalTourismAssociation.com.