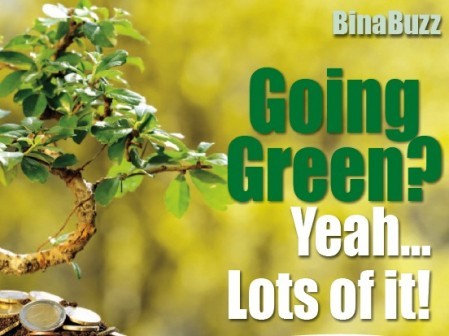 Do you remember that song from the ‘70s: ‘Bein Green? Van Morrison, Ray Charles, Frank Sinatra…even crooner Kermit the Frog popularized the now-famous words of a dead poet named Joe Raposo.  ‘Bein Green was a great song that, for better or worse, has become the de facto Anthem for The Green Movement:  Ford Motor Company used it (with Kermit the Frog) in an ad campaign for Hybrids.  Amazon.com used ‘Bein Green as a theme for a recent shareholder meeting; EDF in the UK uses the song to promote itself, and its Green attitude.

‘Pollyticians of all stripes have wrapped their arms around Green…they hug it like a tree!  I should say, they hug it like a Contributor or a “Special” Interest.  (Hey…isn’t “Special Interest” a little redundant?)
‍

Everyone’s glomming on Green these days:  Green is Good; Green is Omnipresent; Green is Good for God’s sake = Catholics in California have gone Green for Lent!  Even The Girl Scouts are going Green!  What next, Green NASCAR?  Green Manufacturing?  A Green, Green Giant?  The Green, Green Hornet?  Some Green, Green Eggs and Ham?
‍

“Green Green, it’s Green they say, on the far side of the hill.  Green Green, I’m going away to where the Grass is Greener, still.”      The New Christy Minstrels
‍

In THIS issue of Medical Tourism Magazine, I see hospitals and clinics are now flying their Green Freak Flag.  Clinicians are now operating under Green Principals?  Medicine is promoting itself to be a Sustainable enterprise – really?
‍

I thought hospitals were all about The Red – not the Green?  I thought hospitals and clinics were always about Sustainable Practices?  (Isn’t a patient’s sustainability a care giver’s only charge?)  And what does leadership in energy and environmental design (LEED) have to do with Leadership in Curing and Caring?
‍

Green, Sustainable and LEED are popular, politically correct buzzwords that are all the rage in business, but a Green Hospital?  A Green Clinic?  A Green Proctologist?

If I were CEO of a Hospital or a Destination Clinic, the only Green initiative I’d want my staff to focus on was a sustainable Patient Base and a Green Cash Flow.  I’d want to be a: 1) Quality, 2) Competitive, 3) Clean provider with 4) Great Service and Outstanding People.  Now THAT’s a Sustainable Business Model; it will LEED the market; our competition will be Green with Envy.  I’m Good with THAT kind of Green!
‍

I would shift any budget going for Green Initiatives into my PR Initiatives budget.  I’d get intimately involved with the good people at the Medical Tourism Association, and hire a Healthcare/PR Guy (like the author of this article).  You gotta spend some Green to make some Green – which is a Sustainable tactic I’d support.
‍

Two years ago, Nicolet National Bank in Green Bay (yeah, their logo is Green), conducted a Study of 500 CEOs and Business Owners.  (NO paper was used to gather the data – nor animals used in questionnaire testing.)  Nicolet asked:  How Green was their Valley?
‍

CEOs in Green Bay must be pragmatic practitioners of what some people in the Green Movement call “Market-based Environmentalism.”  (Is that an oxymoron, or what?)  The Green Bay CEOs are divided on whether Going Green gives them any kind of competitive advantage [see Chart], but 74% said that, “using improvement of the environment” as part of their marketing strategy was an Important (52%) or a Very Important (22%) factor in their decision to go Green in the first place!
‍

Market-based Environmentalists, indeed:  Almost half of the CEOs in the Nicolet Bank panel were motivated to go Green because their competitors were doing it.
‍

SOME CEOs, like those on Newsweek’s 2009 Green Ranking, truly embrace Green: “Their headquarters have solar panels and rainwater collection; they think of the environmental impact of every aspect of their businesses.  But this is labor intensive, expensive and takes commitment.  Faced with that, many corporations take a different approach: They don’t do much of anything to change the way they do business, but make a big show of their dedication to Mother Earth.”
‍

Does anyone really care if your Hospital is Green?  I don’t think so.  People care about Outcomes; about Quality; about Good Service.  And the ONLY Green people truly care about is the cost of care.
‍

Since the first Earth Day, Michael Bina’s Green Eyes have glazed over with Green Stuff…it must be the Environment:  His team is Green = Green Bay Packers (they have a player named Ahman Green); Bina’s city is Green, and the Bay he lives on is, duh, Green Bay (unless it’s frozen – which is most of the time).  His Congressman is named Green; and his Senator – Gaylord Nelson – was the guy who founded Earth Day in 1969!

Bina’s favorite beans are Green (his tea, too).  He drives a Ford Hybrid, and likes Green olives in his martinis (but doesn’t like them dirty).  His dirty dog drops enough Green fertilizer on his lawn for Michael to claim:  The Greenest Lawn in Emerald City!  Save a Tree = eMale Michael NOW:  mbina@new.rr.com.  Let’s make some Green together!