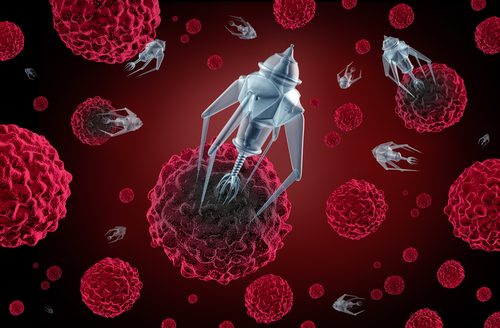 While your smartphone screen keeps getting bigger, technology to fight cancer keeps getting smaller. With a name that sounds as though it belongs in a 1950’s B movie, nanobots could be the next great—albeit small—thing in the fight against cancer.
‍

Although they are still in the prototype phase, nanobots have recently been studied by a team of scientists from Bar-Ilan University in Israel as part of an emerging science that combines human DNA with modern technology. The science, known as nanotechnology, incorporates organic nanoparticles with tiny robots that can be deployed inside a cancer patient to seek and destroy malignant tumors.
‍

Currently, nanobots are programed to recognize 12 different types of cancer cells and can attack them with amazing selectivity and precision. Unlike chemotherapy and radiation therapy, which destroys healthy cells in addition to cancer cells, nanobots release cancer-fighting drugs directly into the malignant tumor. In this way, nanobots maximize the efficiency of the drugs while greatly reducing harm to surrounding healthy tissue.
‍

In addition to destroying cancer cells, nanobots can also be programed to make repairs at the cellular level. They can locate damaged tissue in the human body and begin the regenerative process with their DNA components to form new, healthy tissue. In this sense, nanobots could be a pioneering force behind a multitude of medical breakthroughs, including helping paraplegics walk again or reversing the effects of Alzheimer’s.
‍

While injecting tiny robots into a human body may sound like something straight out of a science fiction novel, nanobots have already shown promising results in numerous clinical trials. However, as with any new medical technology, the bots are not immune to critics and skeptics.

For some, the cost associated with the production and use of nanobots makes them too expensive for the average patient. For others, nanobots signify a new form of potentially catastrophic biological warfare, should the technology fall into the wrong hands.
‍

Yet, despite concerns over the potentially negative consequences of implementing medical nanotechnology, scientists working with the bots feel the benefits far outweigh the drawbacks, and they expect the tiny machines to be available for public use in one to five years.