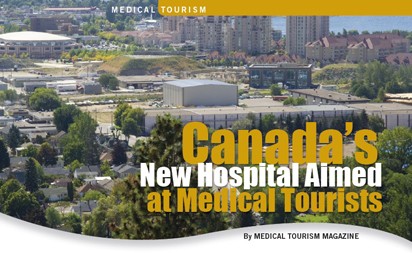 Canada has plans in the works to build a hospital aimed mainly at medical tourists and Canadians seeking faster care. The hospital will be the first of its kind in the country, and developers are looking to form international partnerships to help complete the project.

The Westbank First Nation wants to build the Lake Okanagan Wellness Clinic, a 100-bed facility with 10 operating rooms, an “international-caliber chef” and full lab with diagnostic capacity. The clinic will overlook Lake Okanagan and city of Kelowna, British Columbia and will span 15 acres of land that sit on Westbank’s 83 square miles of reserve territory.
‍

The Vancouver Sun reported the second phase of the project will include a spa, gym, assisted living residence for seniors and housing for the staff. The hospital will also have centers for DNA diagnostics, stem cell therapies and a hyperbaric oxygen chamber.
‍

Louie told The Vancouver Sun that WFN’s contribution would be the land, and investors would cover the costs of construction. According to a document found by the paper, the hospital will attract investors because “around the world, the words ‘healthcare’ and ‘unsustainable’ are synonymous.” Louis also said over 90 percent of WFN’s band members endorse the project.
‍

The hospital will run outside of the country’s public health system, known as Medicare. There are other private clinics in the country, but most of them are highly specialized. There are about 15 medical tourism companies operating within the country, seven of which are in British Columbia. The idea is to keep Canadians spending their money within the country, instead of traveling abroad for medical procedures.
‍

Louis said he is hoping that The Johns Hopkins Hospital in Baltimore, Md., or another reputable entity, will partner with WFN and help run the hospital. The affiliation would create instant credibility. “We’ve had discussions with Johns Hopkins, but nothing is concluded yet,” he told Indian Country Today Media Network.
‍

Gary Stephenson, director of public affairs for Johns Hopkins, said medical tourism is not a typical field in which the American hospital gets involved. “We have had some very, very early discussions regarding this proposal,” he said. “It would be premature to speculate where these discussions may lead, if anywhere.”
‍

There is also uncertainty about whether WFN will face legal issues with the proposal. But Louie seems hopeful the project will move forward.
‍

“The way legislation is written, you can’t call it a hospital, but that’s what it will be,” he told The Vancouver Sun. “Although it will also be a holistic medical wellness center that could include traditional aboriginal healing practices like sweat lodges, spiritual ceremonies and burning sage.”