Canadians Seeking Healthcare Abroad: Why and How Many? 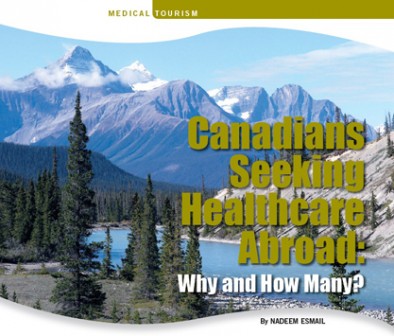 All Canadians have access to a taxpayer-funded healthcare system that provides first-dollar (no cost-sharing) coverage for medically necessary physician and hospital services. Yet despite the “free” service at home, tens of thousands of Canadians seek healthcare outside of Canada each year. Many do so in response to the failings of the Canadian healthcare system.

Some Canadians who seek care abroad leave as a result of long delays before receiving medical treatment. In some cases this may be simply to avoid delay. Others may be trying to avoid some of the adverse medical consequences of waiting for care such as worsening of their condition, poorer outcomes following treatment, disability, or death.
‍

In 2011, the average Canadian in need of medical care could expect to wait 19 weeks from required general practitioner referral to treatment by a specialist in Canada (Barua et al., 2011). Half of that wait time was to see the specialist for a consultation. The other half was for treatment after appointment with a specialist. In addition to these waits were long delays for diagnostic services: nearly one month for a CT scan, 9.2 weeks for an MRI scan, and 4.6 weeks for an ultrasound scan (Barua et al., 2011).
‍

While wait times are long on average, they are much shorter for life-threatening conditions than for other ailments. In 2011, Canadians waiting for cancer treatment could expect total wait times of less than five weeks. Those waiting for elective cardiovascular surgery could expect to wait a little more than 10 weeks.

Critically, any wait time, even a short one, entails some amount of pain and suffering, mental anguish, lost productivity at work and leisure, and strained personal relationships. Wait times also take a toll on the family and friends of those waiting, and may even affect an individual’s ability to provide for him or herself and loved ones. Delays in diagnosis and treatment can be devastating for individuals, their families, their employers, and others who rely on them both personally and financially.

These are not the only consequences of waiting for healthcare however. It is also possible that diseases might advance during the delay, potentially affecting treatment and outcomes. Complications may also arise as a result of this deterioration.
‍

Importantly, delays for medical care in Canada can be medically harmful. In 2011, the wait time for treatment after an appointment with a specialist was, according to a national survey of physicians, 42 percent longer than what physicians consider to be clinically reasonable (Barua et al., 2011). Studies examining the adverse consequences of long wait times have found increased likelihood of hospitalization and emergency admissions, poorer outcomes following treatment, and increased likelihood of death (Esmail, 2009).
‍

If all of the above wasn’t reason enough, Canadians have another reason to seek care abroad: concerns about quality.
‍

Advanced medical technologies are less common in Canada than they are in other developed countries. Canada has fewer MRI machines, CT scanners, PET scanners, and lithotripters than the average developed country on a per million population basis (OECD, 2011).

Research also shows that Canada’s relatively small inventory of medical technologies consists of many old and outdated machines, suggesting the quality of services provided by these machines is lagging (Esmail, 2008).

Canada has also been recognized to be a late adopter of advanced medical technologies and is slow to expand inventories or applications of these technologies once they are introduced (Esmail and Wrona, 2008). This seems to be especially true for minimally-invasive and comfort-enhancing medical technologies.
‍

Finally, some Canadians are sent abroad by the public healthcare system because of a lack of available resources or lack of appropriate procedure/technology in the public system
‍

In total, in 2011, an estimated 46,159 Canadians sought medical care in another country. The largest share of travelers (39 percent) came from Canada’s most populous province of Ontario. Patients from British Columbia and Alberta (the third and fourth most populous provinces respectively) made up 40 percent of medical travellers (20 percent from each province). The remaining 21 percent came from the remaining seven provinces (Esmail, 2012).
‍

This number is likely an underestimate of the actual number of Canadians who left Canada for healthcare. Importantly, these numbers are based on responses to a survey of specialist physicians, which means that patients who leave Canada without consulting a specialist are not likely to be included in the count.
‍

It should be noted that the departure of Canadians is bolstered by government restrictions on private healthcare activity in Canada. In most provinces, Canadians cannot purchase medically necessary care privately. In two provinces, Quebec and British Columbia, the rules are somewhat more relaxed though still more restrictive than might be found in other developed nations.
‍

Wait times in 2011 are much longer than in years past. The total wait time of 19 weeks in 2011 is more than double what it was it was back in 1993 (when national measurement of wait times first began in Canada) (Barua et al, 2011).  And this growth in wait times has occurred in spite of large increases in healthcare expenditures that strain government budgets (Esmail et al., 2012; Rover and Skinner, 2011).
‍

Statistical analyses of the relationship between wait times and health expenditures in Canada show a troubling state of dysfunction: increases in health expenditures in Canada do not lead to reductions in wait times or increases in the volume of services delivered (Zelder, 2000; Barua and Esmail, 2010). Put differently, Canada is not likely able to spend its way out of the waiting time problem.
‍

Things look worse when a broader view of health system performance is taken into consideration. These long wait times, some of the longest in the developed world (Commonwealth Fund, 2010), and lack of access to advanced technologies come at considerable cost: Canada’s healthcare system ranks among the developed world’s most expensive universal access healthcare systems (OECD, 2011).
‍

Canada’s healthcare system provides poor access for Canadians in need of medical care. In response, many Canadians seek healthcare abroad and are likely to continue to do so. In some cases, these patients needed to leave Canada due to a lack of available resources or a lack of appropriate procedure/technology.

In others, their departure will have been driven by a desire to return more quickly to their lives, to seek out superior quality care, or perhaps to save their own lives or avoid the risk of disability.
‍

While on staff at the Institute, Nadeem authored or co-authored more than 30 comprehensive studies and more than 150 articles on a wide range of health care topics including waiting lists, international comparisons of health care systems, hospital report cards, medical technology, and the physician shortage.

His articles appeared in newspapers across North America including the National Post, Globe and Mail, National Review Online, and Wall Street Journal. He has also spoken internationally on health care policy and reform.