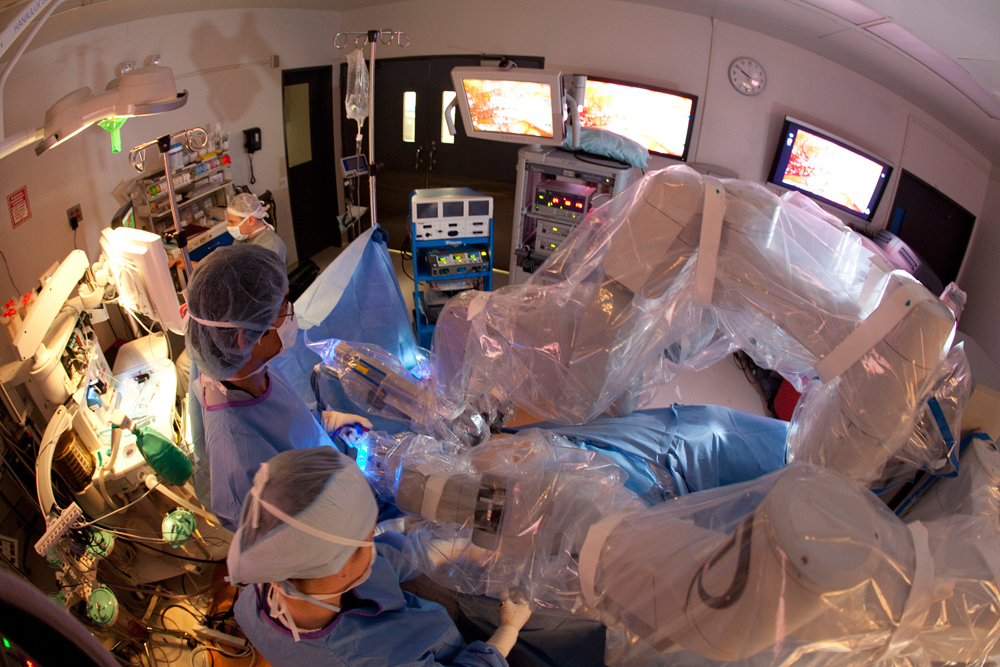 Patients diagnosed with prostate cancer who are considering surgery may first want to ask their doctor about a popular robot, and then talk to their travel agent about a medical tourism vacation in the Caribbean.

Upon arrival amidst the stunning beaches and mountains, they will also find the first robotic surgery institute among the 13 regional island nations.

The robotic surgery, performed to the tune of some 400,000 procedures in the United States in 2012, is expected to open doors to medical tourism patients from around the world looking to take advantage of cost savings of up to 75 percent in the Caribbean, and the beautiful surroundings as well.

You're going to change the lives of many, many people out there and be part of the first robotic institute in the Caribbean, Dr. David Samadi, namesake of the Samadi Institute and Chief of Robotic Surgery at Lenox Hill Hospital, in N.Y., told a crowd, which included Dominican Republic President Danilo Medina, at the opening of the facility earlier this month.

This is a huge blessing for us to part of this; we are very proud.
‍

Doctors at Metropolitano Hospital de Santiago will now be able to use techniques developed by Dr. Samadi, the first physician to perform prostate cancer surgery in the Dominican Republic, as well as other delicate procedures in a safer, more effective manner, with minimal blood loss, said Dr. Marc Siegel, Associate Professor of Medicine, at NYU Langone Medical Center, and a colleague of Samadi on the Fox News Medical A Team.

Robotic surgery expertise builds with time, said Samadi, who, like the HOMS surgeons who will use the new robotics facilities, began his career as an open and laparoscopic surgeon. These new operating rooms and da Vinci Systems are an important step in the evolution of improved patient care here in the Dominican Republic. In the months and years to come, these surgeons (at Hospital Metropolitano de Santiago) will help patients achieve significant recovery benefits.
‍

The da Vinci system enables surgeons to operate through a few very small incisions instead of a large open cut found in traditional laparoscopic procedures. Using a magnified 3-D high-definition vision system and special instruments that bend and rotate far greater than the human wrist, doctors control the da Vinci robot while sitting at a computer screen rather than by standing over a patient.

The operation is less tiring to doctors. Plus, robot hands don't shake and instead allow for enhanced vision, precision, dexterity
and control. Da Vinci procedures typically have patients in and out the hospital within the same day and urinary continence and
sexual potency are enjoyed by most within a year of surgery.
‍

Close to a million Americans annually seek medical tourism procedures and treatments outside the United States. Siegel believes as the federal government continues to implements more regulations and restrictions at home, more American patients will be provoked to seek alternative solutions at healthcare facilities overseas.
‍

Alejandro Cambiaso, President of the Dominican Association of Health Tourism, said the Dominican Republic would be at fault to neglect the potential economic windfall from medical tourism. He alluded to figures that show approximately 1.6 million Americans traveled to foreign nations for medical services in 2012 at prices 30-85 percent less the cost of similar procedures and treatments in the United States.
‍

Quality Is Job One

Quality and safety are important considerations for patients contemplating a medical trip overseas, she said. Quite simply, even though technology, legislation, service and the removal of language barriers are significant incentives, health centers that are accredited internationally remain key factors to attract more patients.
‍

For his part, President Medina has set aside US $14 million of the Dominican Republic budget to develop a network of public health services.
‍

This is a huge step in this country, said Dr. Samadi, who is encouraged by the continuous advancement of international hospitals as they adopt robotic surgery procedures and hone their skills. The new institute and the acquisition of the da Vinci surgical system will bring tremendous life-saving opportunities to patients throughout the Caribbean.
‍

Samadi said as the net of robotic expertise expands, the opportunities for international collaboration grow, as well. Surgeons can work together from thousands of miles apart, sharing knowledge in the diagnosis, treatment and recovery of patients worldwide, he said.