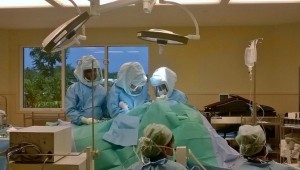 After searching the internet for solutions in Southeast Asia and Latin America, Michael Lepley accidently stumbled upon the Cayman Islands, bad hip and all.

I had not had a five-minute conversation with a doctor in the United States in five years, so, I thought, this is a good start, said the retired American, who, after a 60-minute dialogue with doctors at Health City Cayman Islands, decided to embark from his home in Tennessee on a medical tourism journey to the British Caribbean territory, where he underwent successful surgery on his left hip earlier this year.
‍

Lepley was familiar with the procedure, but not the appealing price. Even without health insurance coverage to lean on, Lepley said the entire cost — surgery and trip combined — was much lower than the price he had paid five years ago when his right hip was replaced in the United States.
‍

I don't think that's (financial savings) the most important thing, said Lepley. This place was just unbelievable — the quality of care, the quality of facilities, equipment, the nurses, the technicians, food everything's been top notch.
‍

Since opening earlier this year, Health City Cayman has put the tiny island of just 55,000 residents on the international map for more than Stingray City or Seven Mile Beach. Once complete, Health City will house 2,000 beds, a medical research team and an assisted-living center to form one of the largest healthcare complexes in the Caribbean for cardiac surgery, cardiology, orthopedics, pediatrics, endocrinology and pulmonology.
‍

Dr. Devi Prsad Shetty, renowned heart surgeon for Mother Theresa and brain trust behind the idea to bring high-quality, low-cost medicine to the Cayman Islands and Central and South American outposts, believes these services can sustain a major medical center on the island. Health officials in the Caymans concur. But, they are counting on Americans, many of whom bought insurance through the Affordable Care Act's federal and state exchanges, to foot a good portion of the bill
‍

Analysts say deductibles for Americans who purchased Obamacare plans can top $5,000 for individuals and $10,000 for families. Faced with the prospect of substantial price increases next year or the inconvenience of changing plans, many of these 7.3 million Americans might not hesitate to forgo the high out-of-pocket costs and make the one-hour flight to the Cayman Islands for affordable
care instead.
‍

High deductibles can cover the costs of severe illnesses and lengthy hospital stays, but even for those insured, costs associated with elective procedures can be jaw-dropping, said Renée-Marie Stephano, President of the Medical Tourism Association. People may be influenced to shop around for alternatives. Fortunately, after a little research and planning, Americans with marketplace coverage can find low-cost procedures overseas that are backed by international accreditation, quality assurance and the transparency of outcomes.
‍

Stephano said the proximity of the Cayman Islands to the United States and international recognition as a tourist destination gives Health City a leg up on the competition for medical travel dollars in the Caribbean. But, those attributes alone won't guarantee sustained success.
‍

Beautiful beaches and a Caribbean-style vacation can only go so far to attract international patients, said Stephano. Competition for international patients is stiff. Savvy healthcare consumers with an eye toward travel have raised the bar on the quality of care they expect and the standards they seek. Ongoing education and training is certainly a critical factor for medical tourism patients to consider and a matter of necessity for healthcare providers to complete.
‍

Stephano said the Medical Tourism Association is working with the government of Puerto Rico to implement a training program that will not only improve facility and professional standards on the island, but the overall patient experience as well.
‍

One poor patient experience surgical outcomes on down to the selection of food — can hamper the reputation of a hospital and destination, said Cristina Cardona, executive global program manager at the Medical Tourism Association. Airport-to-hotel transfers, lodging accommodations, translator services at the hospital, menus that are sensitive to cultural habits and sightseeing offerings are all components of the medical tourism package that only the proper training and education can identify, evaluate, and improve upon.

Americans are far from strangers to the Cayman Islands. Situated 480 miles south of Miami, Fla., the popular Caribbean vacation destination offers plenty of natural beauty, fine dining, shopping, outdoor activities, nightlife and historic sightseeing. Sun, sand and surf is further complemented by the evolution of Health City, which will break ground next year on a hotel to lodge overseas patients and housing for rehabilitation facilities.
‍

We're one of the few hospitals in the world to publish our prices as a bundled flat rate, said Chandy Abraham, M.D., Health City's facility and medical director who boasted about the strategy to delegates at the World Medical Tourism & Global Healthcare Congress, earlier this year, in Washington, D.C. And that's what you'll pay, nothing more. You get one bill and you'll never get another bill. It's a model that gets a lot of attention when we talk with other healthcare providers.
‍

Since construction commenced 12 months ago, that model has grown to include complex procedures, such as open-heart surgery for about $2,000 substantially less than other medical tourism hospitals in India charge and a fraction of the $20,000 to $100,000 cost found in the United States. Health City officials say aligning a caring and responsive environment with affordable costs is job one.
‍

The goal is to continuously reduce the cost so everyone can afford [care], said Shomari Scott, Health City's marketing director, during a Caribbean Summit for government officials at the World Medical Tourism & Global Healthcare Congress. The funny thing is medical tourism is going to be the by-product.
‍

Elsa Robinson wasn't laughing when her cardiologist told her she needed an angiogram to determine if the arteries in her heart were blocked.
‍

Normally, they send you overseas for an angiogram, but because Health City is open, they referred me over there, said the 65-year-old woman who no longer feels the pain in her chest after becoming the first local resident to undergo open-heart surgery on the island.
‍

From the onset, the Cayman government has worked alongside Health City in a broader effort to create jobs and diversify the island's economy, which ranks 14th among the world's nations for standard of living. To lure Health City a project backed by India-based Narayana Health and Ascension Health, the largest private not-for-profit health system in the United States authorities offered the odd partnership deals ranging from lower malpractice caps and amended employment laws to waivers on import taxes on medical equipment and for work permits fees. Critics contend these incentives and concessions could shift the competitive balance against local healthcare providers.
‍

That hasn't stopped the government from designating additional medical travel providers including Seven Mile Medical, Harmonic Consultants Health Care, Perseus PCI and the Da Vinci Centre for Wellness and Alternative Therapies to open up shop near Health City in the tourism district of George Town.
‍

Ric Walton is among those glad to see these services are available for vacationers, too. The American tourist from Colorado was on a ferry boat to Stingray City when he collapsed. When the boat returned to shore, Walton was immediately transported to Health City.
‍

The people have been so kind and faithful, said Charlotte Walton as she watched her husband discharge from Health City, her voice wavering as she recalled how her son and daughter-in-law kept him and their dream vacation alive with CPR and mouth-to-mouth resuscitation until cardiologists could intervene. We've just been very blessed.