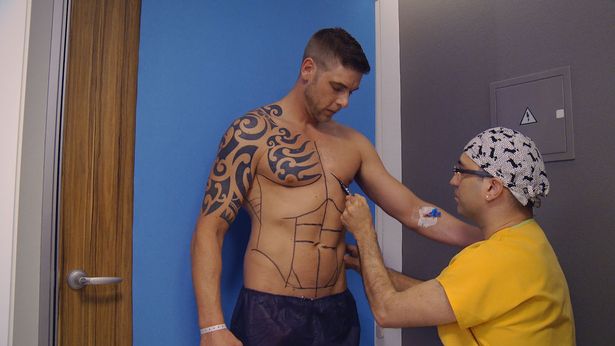 Even though he exercised at least six times a week, Lee Coupland couldn't tolerate the way his 31-year-old body looked; yet he knew he could stomach a medical tourism procedure in Turkey.
‍

The young father of two chose to travel from his home in Leeds to Istanbul, where he spent some 3,500 for cosmetic surgery that promised him six-pack abs for life. The procedure, dubbed Abdominal Etching, enables cosmetic surgeons to create a more visible muscular definition in the male torso.

Also referred to as the washboard abs look, the liposuction technique is designed for men who are relatively fit, but desire a leaner, chiseled abdominal appearance.
‍

A small number of doctors have begun to offer abdominal etching to men with good skin elasticity like the British construction worker, who, in October, became the seventh patient from the United Kingdom in the past six months to take advantage of medical tourism to the Turkish hospital.

More patients continue to seek medical tourism options when considering cosmetic surgery — more than any other treatment, according to a 2015 survey released by the Medical Tourism Association.
‍

Cosmetic surgery has gone main-stream, said Renée-Marie Stephano, President of the Medical Tourism Association. Any stigma related to cosmetic surgery has been eliminated, in large part, by a generation of prominent figures in the news both male and female who have undergone makeovers.

Nose jobs, breast augmentation or Botox injections are no longer regulated to blaring headlines across tabloid newspapers or on reality television shows. Cosmetic surgery has gained worldwide acceptance beyond the Kardashians.
‍

Nowhere is that green light more noticeable than in Korea, considered the world's mecca for cosmetic surgery. A competitive culture and access to more than 2,000 plastic surgeons nationwide triggered nearly one million South Koreans to undergo cosmetic procedures last year.

Medical tourism patients, largely from China, accounted for nearly half of all cosmetic procedures in Korea, helping to build a revenue stream of some $5 billion annually. Some Chinese choose to go under the knife at home.

The China Association of Plastics and Aesthetics values the industry at 400bn yuan ($62.6bn; 41.7bn) and expects that figure to double by the end of the decade.
‍

Across the globe, surgeons performed more than 20 million cosmetic procedures last year. No medical tourism destination has gone untouched. Patients might be drawn to Rio de Janeiro for inexpensive tummy tucks or to Salt Lake City, which has more board-certified plastic surgeons per capita than any city in the United States.

Even in Iran, where women must wear a scarf over their hair and neck, 40,000 cosmetic surgeries were performed last year, 60 percent of which were nose jobs, according to the Iranian Association of Cosmetic and Plastic Surgeons.
‍

Meanwhile, in an upscale neighborhood of Gaza City, patients visit Salah El-Zanin the only local cosmetic surgeon with European qualifications to repair scars left by bombs and bullets; others come for more traditional surgeries from rhinoplasty to breast enlargements.
‍

Stephano said consumers, who turn to cosmetic surgery to improve their appearance and, and in turn, their self-esteem, must also be confident that their healthcare provider is equipped with the training to treat the unique needs of medical tourism patients.

She said Americans without dental insurance can now head south just across the border to Los Algodones, Mexico, knowing that doctors and clinical staff at the Sani Dental Group earned International Patient Services Certification after completing an intensive training program and site visit conducted by the Medical Tourism Association.
‍

For Lee Coupland to sink his teeth into cosmetic surgery, he had to be convinced abdominal etching would improve the quality of his life. His gut told him it would, even if surgery meant wearing a less-than-flattering corset for six weeks until his chest healed. Now, the fitness fanatic says he can spend less time at the gym and planning meals and more playing with his seven- and six-year-old boys.
‍