Connecting the Dots Between Disney and Hospitals 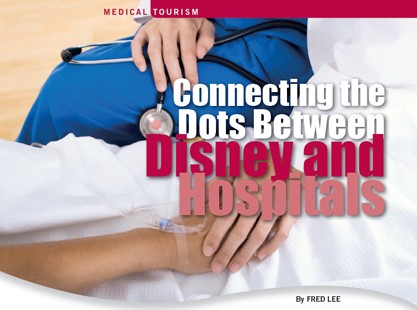 I received a call from Steve Heise of the Disney Institute in Orlando, Florida. He had heard me make a presentation on patient centered care. “We would like you to be part of a team working on a three day seminar, The Disney Approach to Quality Service for the Healthcare Industry. We need somebody to help us understand what it’s like to work in hospitals.”

Shortly after that I went there to help them understand us, and ended up a year later thinking about all the ways we in hospitals could learn from them.

After our first roll out of the new program, I could tell that nursing managers wished for more hospital examples. However, Disney’s position was, “We can only present what we do at Disney. They need to adapt it to their own environment.”
‍

I had plenty of hospital stories. Over the previous twenty years, I had been an executive in two large medical centers, and was married to a Director of Nursing. I had experienced three major clinical events in my own family needing intensive care that provided many examples of what I felt was important to patients and their families.
‍

The first tragic event happened many years ago when my beloved wife, Margaret, hovered between life and death for two months in intensive care, and then rehab, eventually succumbing to encephalitis from a mosquito bite while we were living in Singapore. She was 28 years old. She left behind a 2-year-old son and 5-year-old daughter.
‍

Within 24 hours of getting a bad headache, she was in a wide-awake coma. After the first critical week, her American doctor, who treated her as if she was his own daughter, flew with her on our Pan Am flight all the way to the United States where we expected to get the best care in the world.

We had to buy nine airplane tickets for her, so they could put a stretcher on the backs of three rows of seats. Her physician was bent over her, responding to every change in her condition. The pilot came on the intercom and announced to the passengers, “We have a very sick person aboard who has a condition that is not contagious. Her doctor is with her. Should there be an emergency we will turn around and fly back to Tokyo.”
‍

I watched anxiously as her doctor stood like an angel hour after interminable hour, with his stethoscope and a homemade suction device for her tracheotomy, constantly monitoring, constantly suctioning, and constantly wiping her forehead, before he could finally deliver her to the ICU in a hospital in Los Angeles.

The next day he returned to see her. But when he came back out of the ICU he was visibly shaken. There were tears in his eyes. I followed him into the elevator, and we both broke down when he said, “I can’t believe how far they let her go downhill in just one night. She has turned blue for lack of oxygen because they did not suction her often enough.”
‍

That next night, I returned to the ICU after midnight. I could hear Margaret rasping clear down the hall. As I passed the nurses’ desk, a nurse had her feet up reading a novel. I suctioned her myself. Every night thereafter, my mother, a nurse, did special duty nursing. We concluded that since Margaret was in a coma with a fatal diagnosis and no family to call for help, she had been ignored.
‍

Now, decades later, I remember only two kinds of hospital workers—those who treated Margaret with compassion, as if she was a member of their own family, and those who treated her with seeming indifference and even callousness, probably because she was not aware of what was going on. Unfortunately I can’t remember the majority who faithfully did a good job, with courtesy and competence.
‍

There is an adage I often say: “A satisfied patient has no story to tell. Only the dissatisfied and very satisfied do.” In other words you cannot go from good to great doing just the things people expect, the things that satisfy them.
‍

This event, plus two other traumatic episodes, also involving over a month of hospitalization, have had a lifelong impact on me and shaped the lens through which I view the relationship between patient and caregiver.
‍

A hospital CEO told me that when his father had a stroke, it left him in a coma. Nobody knew if he would come out of the coma or not. Every day, when he visited his father, he hoped that would be the blessed day when his father would wake up for at least a few moments.
‍

One night he couldn’t sleep. About two in the morning, he decided to go into the hospital. As he approached his father’s room he heard someone talking. His heart leaped. When he looked in the door there was a respiratory therapist doing a procedure. The therapist had his back to the door and was unaware of the CEO’s presence.
‍

As he told me this story, his eyes teared up, and he said in a shaky voice, “He was stroking my father’s hair and saying such tender things to him as if my father could hear–things like, “we all love you…your family loves you…we all want you to come back…you will be okay.”
‍

The CEO paused for a few moments as he regained his composure telling me this story. Finally, clearing his throat, he said, “I hope I never manage people in such a way that we drive the compassion out of healthcare.”
‍

His father never woke up, but he will not forget that night and the soft words of compassion from a male therapist.
‍

Hospitals have made great strides in hard-wiring courtesy behaviors and scripts. But if you read letters from fans, they rarely talk about courtesy. They talk about compassion. That’s because courtesy is a universal expectation of customers in any service business. But what if hospitals are not in the service business?
‍

Then I realized that we, like Disney, are in the experience business. When you see a great movie or play, or go to an exciting concert, you do not say, “great service!” You talk about feeling—how it made you feel. You are buying an experience, not a service.
‍

Although this became the central theme of my book, there were many other things that Disney did differently than we do in hospitals. Eventually these experiences and insights resulted in my writing the book, If Disney Ran Your Hospital—9 ½ Things You Would Do Differently. It asserts that meeting people’s emotional needs is just as important for us as it is for Disney. So we could say, “A hospital without compassion is like Disney without fun!”
‍

Fred Lee has the enviable distinction of having been both a senior vice president of a major medical center and a cast member at Disney University. Disney recruited him because of his expertise in helping hospitals achieve a culture that inspires patient and employee loyalty. At Disney he helped develop and facilitate Disney’s healthcare version of its 3-day seminar, Disney’s Approach to Quality Service, and its newest seminar on Customer Loyalty. Using an insider’s experience and a keen eye for cultural comparisons, he authored the healthcare best seller, If Disney Ran Your Hospital: 9 ½ Things You Would Do Differently, which was awarded the 2005 Book of the Year from the American College of Healthcare Executives. He now shares his insights with healthcare groups all over the country.