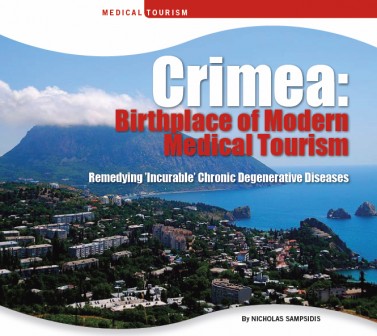 Few places on earth have as many spas, sanatoriums and clinics as the southern shores of Crimea – a tradition going back some 200 years. However, quantity doesn’t always equate to quality. Indeed, after the breakup of the USSR, some stately residences fell into disarray. Following recent Ukrainian government activities, fiscal initiatives, renewed interest on the part of Russian banks, plus the influx of high-profile guests and celebrities, Crimea is very much back – and with polish.

If Eve is an apparent afterthought in the creation of the human race, Crimea seems to be no less so in the creation of continents. A peninsula the size of Massachusetts, Crimea is attached to the mainland by an umbilical isthmus and bolted into the Black Sea at the precise, geographic epicenter of Europe, Asia and Africa.

And situated at the heart of Crimea is the international airport of Simferopol, a 2-3 hour flight from European capitals, with connections through Kiev. No visa is needed for Americans and Europeans.
‍

Situated strategically, it only makes sense that Crimea should also be a center for health and well-being. It’s naturally endowed for such with sage, thyme and rosemary growing wild on its southern slopes. Shoreline temperatures rarely
‍

drop below freezing where subtropical palms abound. In fact, temperatures are just right for plentiful vineyards. Azure waters can be stormy during the four or five months of “winter,” at times even biblical in appearance with golden rays slicing into frothing waters through clouds posing long enough for photo opportunities, making the “Russian Rivera” true to its name most of the year.

Blue skies offset uneven, pastel villages, which painters such as Constantin Korovin immortalized. Views from precipitous slopes are no less sweeping or majestic, today, than they were when A.S. Pushkin and Anton P. Chekhov inhaled inspiration from them.

The bulwarks of mountains that shield Yalta, Gurzuf and Livadia from continental cold in winter months bear the brunt of snow that manages to crawl to it to negotiate a place on its peaks. Even if snow might be rare in Yalta proper, winter apparel is a must.
‍

Crimea’s tradition of modern, medical tourism is traceable to Alexander I, conqueror of Napoleon and master of continental Europe, who voyaged to its shores with Empress Elizabeth after her physicians ordered her to leave St. Petersburg and move to a warmer climate. They bought land near Yalta in 1825 on which the Oreanda manor was built.

Since then, all Russian emperors, their family members and Russian aristocracy came to Crimea to revitalize health and well-being. Mark Twain stayed in Yalta as a young man. Churchill, Roosevelt and Stalin divvied up the world near Yalta, in “Livadia,” the week of Feb. 4-11, 1945. It was the palace home of Tsar Nicholas II and his family.

If legend is believed, according to some historians Odysseus was an early visitor, shipwrecked in Crimea or Ogygia, where he spent seven years with the nymph, Calypso, before sailing on a raft the last leg home.
‍

Treatments for health conditions are as abundant in Crimean sanatoriums as the creative minds of leading scientists from the epoch of the USSR could produce. Natural treatments predating the USSR also have their place. However, results upholding the effectiveness of treatments aren’t readily available so one has to rely on word-of-mouth advice.
‍

ORS Method is a therapy based on research and clinical work conducted originally in the United States and recently introduced to select Crimean sanatoriums.
‍

During the past 40 years, the research team founded by internationally, renowned cardiologist K.A. Oster, who was chief of medicine at St. Vincent-Park City Hospital in Bridgeport, Conn., developed a methodology for remedying chronic inflammatory, degenerative diseases.

Less serious conditions that are being treated include gout (podagra), psoriasis and chest pain (angina pectoris). Examples of life-threatening illnesses include prostate and breast cancer, MS, diabetes I and II, arthritis and cardiovascular diseases.
‍

Considerations that characterize each individual disease are added to the core therapy. Treatment of some of these challenging conditions, such as the healing of diabetic foot ulcers, requires three months, on average. Therapy is individualized for each guest.
‍

Chefs are provided nutritional guidelines drawn up by trained specialists. The core diet may be modified according to individual, symptom complaints, possible laboratory test deviations, as well as individual food preferences.
‍

From June 15-Sept. 15, prices tend to be elevated compared to the rest of the year, nevertheless, they’re still extremely friendly by United States and European measures. Illnesses don’t wait for a particular season, so prices between high and low season aren’t the prime consideration for the medical tourist, but the availability of accommodations can be. Advance bookings are recommended.
‍

Dental work is highly professional with quality on par with the United States and Europe, yet it costs a fraction of the price. As a rough gauge, the price for extracting a wisdom tooth is $5-$15 in Crimea. Massages, skin care, mud baths, manicurespedicures, haircuts, etc., will cost about 5-10 times less than the equivalent in the United States, except in upscale hotels.
‍

ORS Method prices for the treatment of chronic, inflammatory conditions fluctuate according to the class of room selected in a seaside sanatorium as well as on the length of stay. As a general rule, all-inclusive prices for the program, including medical supervision, lab analyses, medications and supplements, three meals a day (an individualized diet plan with drinks and wine), education, use of pool and facilities, range from $1,800-$2,500 for 1-2 guests per room per week, (airfare not included). The recommended stay for the treatment of most conditions is three weeks although some, like angina pectoris, is only two weeks.
‍

Crimea’s natural beauty and charm makes it a hub for painters and artists. Art galleries abound and open-air showcasing of works takes place nearly year-round on Pushkin Street in Yalta. Some of the world’s best painters make Crimea their home.

The realist and impressionist traditions remain well represented with avant-garde works being plentiful, as well. Like Key West, Fla., or St. Tropez, France, Crimea has a style all of its own, exemplified by works of art with an abundance of color and light, which accent and give life to lay-back, even ramshackle subjects.
‍

The Chekov Theater is a historic landmark in Yalta with diverse performances and concerts playing throughout the year. Language may be an obstacle considering that most theatrical plays are in Russian.
‍

Several cities like Yalta have antique and flea markets, which are open year-round. More valued antiques are generally displayed in specialized stores and some of the better hotels.
‍

The southern shore cities of Crimea are 40-80 miles distant from the international airport in Simferopol. Bus and trolley fare from Simferopol to Yalta is a reasonable $2-$4, while cab fare for the same trip is $30-$50. Yalta is about 93 km (55 miles) from Simferopol.
‍

Language and Getting Around

Communication is a priority so getting a Ukrainian SIM card for a mobile phone is a must. The major operators are MTC, Life and KievStar. Promotional rates are always changing, yet all operators offer a starting SIM card with at least 30 minutes of calls for about $5.

KievStar seems to be advantageous because communication with another KievStar subscriber is free for at least six months, even when credit expires. Talk about bargains! Incoming calls from the United States or Europe are also free in that credit is not deducted.
‍

Local currency is the hryvnia, pronounced griv-nia in Russian. One dollar is equal to about 8 grivnia, while 1€ is about 10 grivnia.
‍

Because of the established tourist tradition in Crimea, highly proficient tour guides and translators are always to be found. The better hotels generally have bilingual staff.
‍

Straight through to the extended summer season, plentiful, local, day cruises tour the southern coastline and the rates are very reasonable, roughly $3 for short excursions; $8 for day trips.
‍

The inertia of tradition, sea and sun has allowed Crimea to survive the economic challenges and chaos following the breakup of the USSR. The successful implementation of a curative diet program in select sanatoriums is an example of what can be accomplished with a therapy that works, an example that also applies to any location where persons may be in need of treatment for chronic degenerative diseases.
‍

Although locations with coconuts and palm fronds have their pluses for drawing medical tourists, any resort, hotel or health retreat with an adequate restaurant and chef can improve occupancy rates by introducing an effective curative diet.

It’s worth noting that 60 percent of all bankruptcies in the United States are the consequence of insurmountable medical bills tied to the onset of a serious, chronic degenerative disease. Adding insult to injury is the common failure of costly treatments.

Alternatives exist to invasive and/or toxic therapeutic attempts on the life of a person stricken with cancer or heart disease. The approach for treating them is as true today as it was 2,400 years ago, when it was said:
‍

Protégé of cardiologist K.A. Oster and professor D.J. Ross, Nicholas Sampsidis is an authority on chronic, inflammatory degenerative diseases and a pioneer in their treatment. Author of the best-selling title, “Homogenized Milk & Atherosclerosis,” of which nearly one million copies are in print, he has updated the information and backed it with more than 100 new references in a new edition (eBook format). In his latest title, “Something Called XO,” Sampsidis expands on the hypothesis of Oster and Ross that many apparently different diseases are actually one many faceted manifestation of the same disease. Applying more than 40 years of research to practice, Sampsidis has formulated a unique, nutritional solution for preventing and reversing chronic degenerative diseases – the ORS Method. A graduate of Bowdoin College, Sampsidis provides advisory support to health centers and sanatoriums interested in implementing the therapy. nsampsidis@treat-heart-disease.org
nsampsidis@hotmail.com
+380 096 881 5961 • +380 066 844 0192