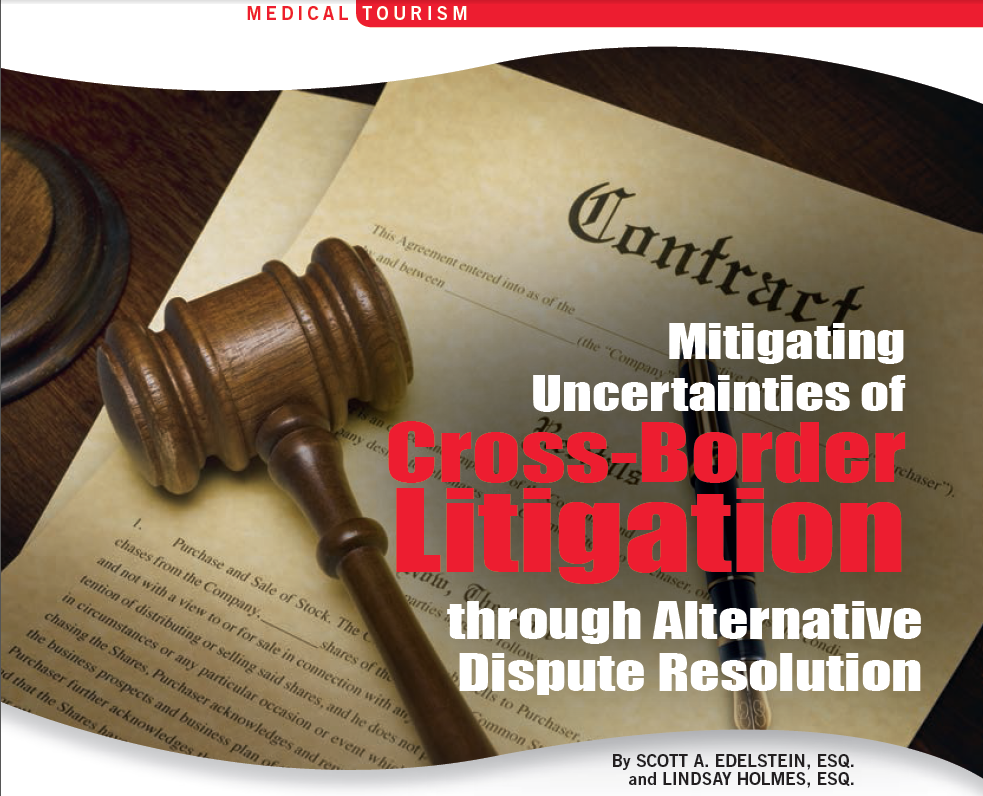 Discourage litigation. Persuade your neighbors to compromise whenever you can. Point out to them how the nominal winner is often a real loser  in fees expenses and waste of time. As a peacemaker the lawyer has a superior opportunity of being a good man. There will still be business enough. Abraham Lincoln Notes for a Law Lecture July 1 1850.‍

These contractual arrangements should be memorialized in a written agreement signed by the parties. Dispute resolution is an integral provision of such agreements. In situations where parties operate across state and national borders disagreements often arise about how and where disputes will be resolved.

Defining the dispute resolution process within MTF contracts can help ensure a speedy and just resolution to a disagreement. Traditionally a party with a contract dispute would file a claim in a court of competent jurisdiction. That government established court would then decide the dispute.

Pursuing litigation to resolve a dispute can be costly and time-consuming and in the context of cross-border and international suits significantly more onerous. Challenges frequently faced in cross-border disputes include determining where and how to file a lawsuit navigating international service of process requirements enforcing judgments in another country uncertainty of legal fees contracting with foreign attorneys limited civil remedies and language barriers.

However there are a growing number of alternatives to settle disputes outside of the courtroom known collectively as alternative dispute resolution (ADR). Among the many available ADR options mediation and arbitration are particularly relevant to MTF agreements.

As shown in the example dispute resolution provision at the end of this article both of these forms of ADR can be incorporated into an agreement to provide options in the event good-faith negotiations are not successful in resolving a dispute. ADR demonstrates that parties can use private rather than governmental processes for resolving disputes.

ADR can be more efficient and less costly than litigation especially when the parties understand the techniques that are most applicable to the circumstances and those techniques are properly employed. The varying degrees of resolution options under the ADR framework allow for flexibility that court appearances often lack.

In addition to the often-cited benefits of economy and speed ADR demonstrates a willingness of the parties to invest the time and energy to amicably settle difficult issues thus setting the stage for improved business dealings in the future.
‍

While not a specific form of ADR the parties should agree to first enter into good faith negotiations to resolve any controversy or claim that might arise under the agreement. The underlying assumption is that when people of goodwill agree to work toward resolution reason will prevail and agreement will be reached.

Benefits of good-faith negotiations include quick resolution of a conflict and a reduction in the cost of outside legal assistance. If the negotiation does not achieve agreement the parties may agree to escalate the dispute resolution to mediation.
‍

Mediation is a voluntary ADR process where the parties to a dispute meet with an impartial third party and attempt to reach a mutually satisfactory resolution of their dispute. While there are a number of different approaches to mediation the common characteristics are entirely voluntary and non-binding.

The mediator is powerless to render a decision or force the parties to accept a settlement. The mediator has no formal authority to apply any pressure on a party other than through persuasion. In the event a mediator issues an opinion either party has the discretion to accept or reject the opinion.
‍

Arbitration clauses in contractual agreements are recognized under U.S. federal and state law as well as in the international arena. The New York Convention a multilateral treaty on international arbitration adopted by 149 countries provides that a court of a contracting state at the request of one of the parties refer parties to arbitration if there is a valid arbitration agreement in place.

Additionally the Federal Arbitration Act could apply to agreements that involve interstate or international commerce as found with many MTF agreements. Additionally all 50 states and the District of Columbia have adopted laws that recognize pre-dispute agreements in contracts.

The majority of states follow the Uniform Arbitration Act drafted by the National Conference of Commissioners on Uniform State Laws. Under these federal and state laws written provisions in otherwise legal agreements that require parties to submit disputes to arbitration are legally valid enforceable and irrevocable.

Many private and quasi-public organizations provide arbitration services. Many of the arbitration bodies adopt specific procedural rules for arbitrations. One of these is the International Chamber of Commerce which specializes in international business disputes and offers administrative services including assistance in the appointment of mediators and arbitrators setting hearings and providing users with information on dispute resolution options such as settlement through multiple forms of ADR.

Another is the American Arbitration Association (AAA) a not-for-profit organization with offices throughout the United States. AAAs role in the dispute resolution process is to administer cases from filing to closing. AAA provides administrative services in the United States as well as abroad through its International Centre for Dispute Resolution.

Parties can choose a specific arbitration body for a number of reasons including area of expertise reputation or cost. Arbitration has a number of benefits and drawbacks. Generally arbitration is more efficient than civil litigation however with small disputes the courts may be able to resolve the matter expeditiously.

Additionally while rules for civil litigation can result in a number of delays arbitration provisions discourage unilateral delays. Further not all arbitration bodies may be appropriate for MTF related disputes due to a lack of expertise related to issues in dispute. Generally arbitration is less costly than civil litigation due chiefly to the reduced time to resolve the dispute.

However the direct costs of litigation are often less than arbitration because the courts are supported by taxes. In arbitration parties must pay all direct and indirect costs. A potential advantage of arbitration is the ability to select the arbitrator. This control seldom available in a civil court permits parties to select an arbitrator with the necessary expertise to address and resolve the issues in dispute.

For more complex disputes the parties may choose to have a panel of arbitrators. Arbitration proceedings are usually less formal than litigation. The physical setting is customarily a conference room as opposed to a courtroom. Also there is no requirement to strictly apply the civil rules of evidence and thus hearsay evidence is routinely admitted.

Furthermore the arbitrator is not required to follow the applicable substantive law in reaching a decision. Additionally the decision award is often simply stated and not supported by a written opinion. In most cases the arbitrators decision is binding on the parties and may only be set aside on very limited grounds such as manifest disregard for the law.

An additional benefit of arbitration is that with few exceptions the general public and press are not legally entitled to participate in observe or report on arbitration hearings. Protection of privacy can be an attractive feature of arbitration. The following is an example of a contractual alternative dispute provision:
‍

There are a number of alternatives to resolving disputes outside of court. Although mediation and arbitration are not always the best approaches to resolving all disputes and careful consideration should be given before agreeing to such forms of ADR they do have the potential to provide a less costly and more cooperative means of resolving disagreements than traditional methods.

In the case of medical tourism where disputes can arise across state or international borders MTFs should consider the benefits and risks of ADR. Specifically when drafting a pre-dispute agreement the parties should thoughtfully consider the types of dispute that would be subject to arbitration the type of arbitration the method of selecting the arbitrator(s) and the location of the arbitration. Based on these considerations parties can decide whether ADR is the right resolution option for their particular situation.
‍

This article was prepared by the law firm of Squire Sanders (US) LLP as general education and information regarding alternative dispute resolution for medical travel facilitators. The article is not intended to serve as legal advice relating to individual situations or as a legal opinion concerning such situations and does not constitute the rendering of legal advice or a legal opinion by Squire Sanders (US) LLP to any Medical Tourism Association Inc. (MTA) member or other person or entity.

Additionally use of the article and the example dispute resolution provision does not establish an attorney-client relationship between any person or entity and Squire Sanders (US) LLP. Furthermore this article is made available to MTA members with the understanding that the MTA is not engaged in rendering legal or any other professional advice.
‍

Scott Edelstein Esq. co-chairs the Health Care and Life Sciences Industry Group at the international law firm of Squire Sanders where he focuses his practice on international healthcare transactions cross-border affiliations and regulatory issues. He represents a broad spectrum of clients in the medical tourism industry including medical centers insurers employers facilitators and government ministries.

Lindsay Holmes Esq. is a healthcare fellow at Squire Sanders where she focuses on healthcare regulatory and transactional issues. She is currently an L.L.M. student at Washington College of Law specializing in health law and policy.