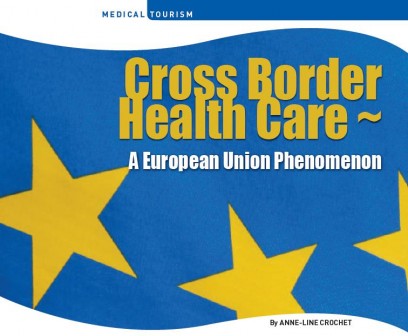 Medical tourism is not only a U.S. phenomenon but some Europeans are also looking for better cheaper and more accessible treatments abroad while staying within the EU borders. Commonly referred to as cross border health care European residents are travelling from Finland to Spain specifically for healthcare services while their national governments reimburse the procedures.‍

The notion of a European Union was established 60 years ago. Today the EU is composed of 27 sovereign member states. A common market was created within the EU more recently guaranteeing free movement of persons goods services and capital with the purpose of stimulating the economy. The European Union member states offer high quality medicine and almost all European countries have a universal health care system.

Universal health care systems are primarily funded by multi-payer systems or tax revenue providing health care accessible for all. Each member state is responsible for the organization and development of their health care system and services rendered. For example Germany has a multi-payer system while Italy is using a tax funded system while both of the governments are regulating and coordinating healthcare.In some cases European citizens may seek healthcare in other EU member countries according to District Hospital Mainkofen CIO Professor and Doctor Kunhardt Horst with the costs covered by their own health system.

According to Horst 90 percent of European citizens are treated in their own country but more than 50 percent of them are willing to travel to another EU country for healthcare.Germany Spain Hungary and Belgium are examples of countries that offer the infrastructure and possibility for patients from abroad to be treated UKE Consult and Management CEO Mathias Goyen said.

Whereas Germany focuses on high-end medicine at an affordable price countries like Hungary found their niche within plastic surgery or wellness treatments at far more reasonable budgets. The idea of medical tourism within the EU is becoming more attractive for many Europeans due to a myriad of factors. According to Horst four factors predominate: the movement of citizens and professionals the unequal dissemination of new medical technologies the common public expectations across Europe and the easy access to medical information through technology.

Many patients from Northern states such as Sweden or Finland come to central Europe for treatment because of long waiting lists at home or as a results of treatments not being offered due to a lower number of cases Goyen said. Another example is patients from the UK. Those patients often seek treatment abroad due to waiting lists and very high prices at home.

However seeking care internationally remains more difficult than being treated within the confines of a residents national borders patients must seek prior authorization from their home state regarding the procedures they plan to undergo in order to claim reimbursement expenses.Europe still has a long way to go in order to reduce bureaucratic hurdles for those patients seeking care abroad and for clinics and hospitals to be reimbursed properly and smoothly for their services Goyen said.

Recently the EU Commission published a Directive proposal on the application of patients right who are interested in cross border healthcare.A key priority of the European Union is achievable and effective mobility for EU citizens Goyen said.According to Horst the Directive provides a framework and clarifies the patients right to seek health care in another EU member state while being reimbursed by their national system.

This October upon a Bulgarian Court request the European Court of Justice determined a preliminary ruling entitling the defendant a Bulgarian patient who crossed EU borders to undergo surgery before seeking prior authorization for reimbursement of the procedure by his insurance - the national health insurance fund - disregarding this lack of prior authorization.

This ECJ preliminary ruling while pertaining to this specific case could be the first step to a new medical tourism arena for European patients European hospitals and member states. A concerted European strategy is being developed to further facilitate the movement of patients and professionals simplify procedures and increase the quality of and access to cross-border care Goyen said.

Some governments are already taking the lead encouraging the development of medical tourism and cross border health care. In 2011 Germanys National Tourism Board will launch a cross-media campaign on health and medical tourism funded by the German Ministry of Economics.