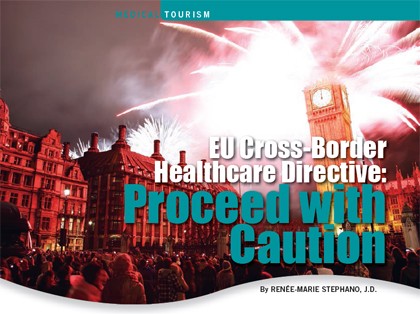 On the fringes of Europe the other day, the dreams of dozens of North Africans were ended in the early hours when Spain’s paramilitary Civil Guard rounded up the group of would-be immigrants looking to escape to the relative prosperity of Europe.

The incident not only underlines the lengths that immigrants from outside the continent will go to grasp a better life, but runs contrary to underpinnings of the European Union, where goods, services, capital and people can move freely within the 28-member states.
‍

As the EU Directive on Cross-Border Healthcare solidifies the rights of a new generation of Europeans to choose in what country they would like to travel for medical attention, treatments and procedures, member states are grappling with the principles of freedom and the potential upshot from their social and economic liabilities.
‍

From the northern-most point in Finland to the southern tip of Cypress, EU citizens have the rights to healthcare within their own country or – if they choose – the freedom to travel to another state within the EU for healthcare. The softening of borders under the EU Directive is expected to provide the impetus for increased medical tourism opportunities among Europeans eager and willing to travel within member states for healthcare, through eased reimbursement platforms.
‍

What many of these newly created health travelers may not have known is that they already had those rights. Passage of the EU Directive on Cross-Border Healthcare did not increase or reduce these movements, but rather provided a formal framework from which individual healthcare systems could operate medical tourism functions.

Among the developments from the directive are rules pertaining to access, safety and quality standards regarding care and medical technology, cooperation between member states including the transfer of information, what treatments patients are entitled to and, more importantly, when.
‍

Up until now, many patients who traveled from one EU member state to another for healthcare faced delays in financial reimbursements and doubt concerning where they could or could not go outside of their own country for care. Following passage of the cross-border directive, patients will still be able to travel anywhere within the EU for healthcare as long as the treatment is available at a cost on par or lower than that in their home countries.
‍

From the northern-most point in Finland to the southern tip of Cypress, EU citizens have the rights to healthcare within their own country…

Approval of the directive comes at a time when European governments are in the midst of imposing austerity measures to confront a continent-wide debt crisis while stemming an elevated tide of immigration that some fear is cutting into already scarce medical resources.
‍

The directive has only intensified the focus on immigration, which was already a hot-button topic among EU members. Nationalistic fervor, particularly in the United Kingdom, has even spawned calls for a crackdown on “hit-and-run” tourists or migrants who take advantage of the EU’s free movement of people and travel to wealthier EU member states for work.
‍

To their credit, most of these migrants from poorer member countries take on jobs that the host population has little interest in, spend money and increase business competitiveness in their temporary homes. When the EU was formed in 2004, the initial immigrants weren’t much of a financial burden. They were either young enough to demand little in the way of medical care or were past the age in which the state had to foot the bill for their education.
‍

But, now as both their ages and life requirements have expanded, the principle of free movement has thrown into question their rights to social benefits. Nowhere is the issue talked about more than in the United Kingdom, where the days of foreigners traveling to Britain to take advantage of free healthcare services may be numbered.
‍

Government officials believe foreigners – within the EU and outside – are stripping Britain’s cash-strapped National Health Service in epidemic proportions, costing the United Kingdom billions of dollars each year.

Throwing fuel on the fire, a leading NHS surgeon claimed earlier this year that Britain had become the “world’s maternity wing” and an attractive destination for expectant mothers to give birth. Thousands of others travel to the country for cancer, HIV, kidney and infertility treatment – and then leave without paying, he said.
‍

Government officials believe foreigners – within the EU and outside – are stripping Britain’s cash-strapped National Health Service in epidemic proportions, costing the United Kingdom billions of dollars each year.

Those concerns began to build last year when the wife of a wealthy businessman admitted that she travelled to London to specifically give birth to two boys and three girls by Caesarean section. As a Nigerian national, she said she was not eligible to receive free treatment through NHS, but it was highly unlikely that she would be made to repay the more than $200,000 in treatment costs.
‍

Since then, an investigation by the Daily Mail revealed that health tourism costs the United Kingdom some 24 million pounds in unpaid NHS bills including one for more than 217,000 GBP. The newspaper also reported that for every £100 spent by the NHS, only £23 had been reimbursed.
‍

In response, a leading British healthcare official went as far to say that anyone with a “questionable” residency status should be issued only a temporary NHS number and be charged for anything other than accident- or emergency related care.
‍

The strain on the health system has prompted Germany, Austria and the Netherlands to join forces with Britain to curb free movement and put an end to rampant abuse of benefits by EU tourists. The four members want to make it harder for people from other member states to gain access to healthcare benefits within weeks of arriving in an EU country.
‍

British Prime Minister David Cameron said he was determined to end his country’s reputation as a “soft touch” on immigration and welfare. Beginning next year, arrivals from the EU will be stripped of job seeker benefits after six months unless they can prove they’ve been actively seeking employment and stand a “genuine chance” of finding it.
‍

The UK is certainly not alone in its frustration. The Dutch government intends to fight “the abuse of social security systems” and the German president of the European Parliament has said that the EU must hand back some powers to nation states while strengthening its role in other areas if it is to regain public trust and reverse the tide of skepticism in countries like Britain.
‍

Adding credibility to the perceived distrust, a nationwide poll conducted in August reported that almost half of the UK population above the age of 50 said they would vote to leave the EU. If re-elected in 2015, the British prime minister has vowed to hold a referendum on EU membership and, thus, throw a curve in the path of Europeans moving about freely within the region for healthcare.
‍

Public dissatisfaction is nothing to underestimate. Healthcare is commonly the single biggest driver of government spending – for all nations. Look no further than the United States where every dollar spent by Uncle Sam is another dollar spent involuntarily in taxes. More government spending not only invariably amplifies resident fear, but inevitably mitigates freedom and opportunity.
‍

The basic principle that citizens are free to move within the EU to shop for the best medical treatment available at the most affordable prices is a crucial precept to medical tourism opportunities. Balancing economic prosperity with access to appropriate healthcare then becomes not only the lifeblood to countless at-risk patients, but the EU itself.