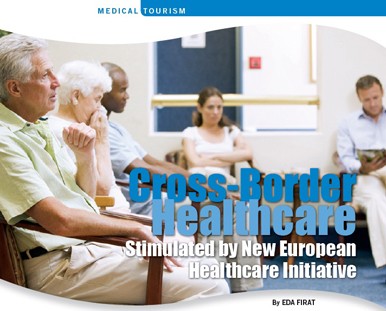 Sometimes, traveling abroad becomes a necessity rather than an option. If the patient needs treatment for a rare disease, they may travel to facilities outside of their residing country for the most advanced treatment.
‍

The European Union is taking strides to make the medical tourism within its boundaries more accessible by initiating the Cross-Border Healthcare. “The program is driven by globalization, internet and consumerism.

Patients are looking for quality, affordability, timeliness, service, destination, security, and availability for procedures”, said Hasselman at the 2011 Congress. Those who are interested in medical procedures are taking advantage of information provided on the internet and doing their research to find the best value for their money.
‍

It has taken extensive time to activate this initiative. The proposal was made back in 2008 but it will not come into full effect to each EU country until October 25th 2013. The current regulations on the European Social Security systems allow citizens to receive emergency care while they are temporarily traveling in another EU country. Patients can also get reimbursed for planned care if they get prior approval.
‍

This new legislation will increase transparency on the rules for reimbursement. Member states of affiliation may decide to pay the healthcare provider directly instead of reimbursing the patient. According to the Council of the European Union, the new directive provides clarity about the rights of patients who seek healthcare in another member state and supplements the right that patients already have at EU level through the legislation on the coordination of Social Security schemes.
‍

The directive will also create a uniform of quality standards for all 27 countries in the European Union to subsidize discrepancies between each country’s own health criterions. It will include guidelines for patients to refer to so they can make educated decisions on where to get treatment which will be administered by national contact points. The increased options for the consumers will add competition within the region and allow for patients to receive better care.
‍

Bernard Merkel is the Head of the Food Safety, Health and Consumer Affairs section of the Delegation of the EU in Washington, DC. He claims the ultimate goal of the initiative is to improve healthcare standards, not to encourage medical tourism.

“Health is too important…you have to have clear, objective information. European reference networks will link specialized centers across Europe to pool knowledge and disseminate information and expertise on diagnosis and treatment,” said Merkel.
‍

Since certain conditions are followed, this system does not take away from or contribute to a specific country’s economic state. Being so, there are not many disadvantages to this initiative. Countries will not reimburse more than the cost it would be for the procedure to be performed at the patient’s native country nor pay for procedures that wouldn’t be covered in their own country.
‍

Even so, the directive does have a couple of limitations. Prescriptions will be honored in every EU country whether they were issued in the patient’s native country or not. Yet this only applies if the native country does not have any regulations against the prescription.

In addition, it does not establish regulations about internet sales of medicinal products and medical devices, distribution of organs for transplantations, nor long-term care services provided in residential homes.
‍

Germany has made initiatives gaining them attention in the medical world. In the past, German hospitals would compete against each other, causing animosity between the regions giving the country a disadvantage. Now, instead of separation, they have brought several territories together to work as one unit so each region can focus on their specialty.
‍

In 2011, the German National Tourist Board began to concentrate on medical tourism & wellness. This cooperation has allowed them to make quality advancements in treatment. They began to have national conferences about medical tourism and formulated a website for hospitals to promote services abroad.
‍

Bavaria- A Better State of Health

Germany is also utilizing regional healthcare clusters like the one in Bavaria. The state has a network of 81 hospitals with treatment for international patients. The cluster monitors medicine, technology, healthcare, education and tourism. The larger hospitals have regular meetings to discuss problems they come across and discuss prevention initiatives.
‍

This cooperation not only improved the healthcare quality in Germany immensely but it also allowed for Germany to market itself as a top destination for medical tourism. Germany has a high density for hospitals which means practically no wait time for medical treatments. Patients do not need to apply for a visa to enter the country which is an added benefit.i
‍

Twenty four percent of all German healthcare providers are situated in Bavaria. “For many guests, the impression of low-key security and the pleasant Bavarian way of life is one of the most important reasons for returning to Bavaria time and again,” said Kunhardt.
‍

The Future of Medical Tourism in the EU

Considering the improvements the European Union is making, the future of medical tourism within its borders is looking rather promising. The added benefits of this directive will provide quality services in a process that will be convenient for the general public.
‍

Eda Firat is Global Congress Coordinator with a focus on marketing and communications for the Medical Tourism AssociationTM. She graduated Florida State University with a Bachelor of Arts in International Affairs and a Minor in Business. Due to her Turkish background, Eda provides recruitment, coordination and retention support for members of the MTA in the European region. She contributes articles to the Medical Tourism Magazine and Health Tourism Magazine. She can be reached at Eda@MedicalTourismCongress.com

Medical Tourism in a Viral World