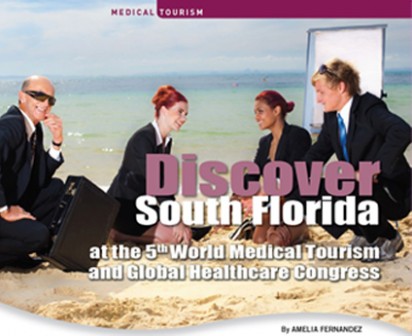 The 5th World Medical Tourism and Global Healthcare Congress (WMT & GHC) will be bringing up to 2,000 people from over 90 different countries to the South Florida area this October. But South Florida is no stranger to diversity, world-class healthcare, international business and, of course, fun.  This beautiful tropical metropolis will provide the perfect backdrop for a successful conference – 85 percent business with 15 percent fun!

The Congress will take place at the Westin Diplomat Resort & Spa nestled between Fort Lauderdale and Miami in the vibrant city of Hollywood. As of the 2005 United States Census, there were 5,334,685 people living in the South Florida metropolitan area, making it the most populous metropolis in the Southeastern U.S. and the eighth most populous metropolitan area in the country.
‍

South Florida is a very diverse community with a large plurality of foreign-born Americans, in large part from its proximity to Latin America. Of the people living in the South Florida metro area, 37 percent are foreign-born.

An astonishing 48 percent of the population speaks a language other than English at home, including Spanish, Haitian Creole, French, German, Hebrew, Italian, Portuguese, Arabic, Russian and Yiddish. Countless other languages are also spoken in the area.
‍

According to a 2009 UBS study of 73 world cities, Miami was ranked as the richest city in the U.S. and the world’s fifth richest city in terms of purchasing power. Although South Florida’s economy is largely based on international trade and tourism, a number of companies are based in the area, many with connections to Latin America.

Because of their proximity, Miami and South Florida serve as headquarters of Latin American operations for more than 1,100 multinational corporations; that adds up to more than $221 billion in annual revenues. A few examples are AIG, American Airlines, Cisco, Disney, Exxon, FedEx, Kraft Foods, Microsoft, Oracle, SBC Communications, Sony, Visa International and Wal-Mart.

Many Fortune 500 companies are based in the metropolitan area, including FPL Group ($15.6 billion), Office Depot ($12.1 billion), World Fuel Services ($11.3 billion), AutoNation ($11 billion) and Ryder System ($5 billion). Many of these employers will be attending the conference to look for quality of healthcare options for their employees.
‍

For more than two decades, the Port of Miami has been headquarters to the world’s largest cruise ships and operations, including Celebrity Cruises, Royal Caribbean Cruises and Carnival Cruise Lines. Cruise lines have unique advantages and interesting target markets for medical tourism opportunities as well.

Many are targeting patients for comprehensive trips on the seas. Some of the challenges this presents for inbound and outbound patients will be addressed at the conference by Dr. Arthur Diskin, the VP & Global Chief Medical Officer of Royal Caribbean Cruises.
‍

Fun in the sun

After three days of intense networking, attendees will have the chance to unwind in the South Florida sun.  South Florida offers a great combination of beautiful nature, fabulous shopping and exciting city life. With the conference venue right on the beach, attendees will have an easy transition from business to fun. Who says that you can’t network with your toes in the sand?
‍

South Florida has a unique ecosystem with both the ocean and the everglades minutes away. Appropriately called “The Sunshine State,” Florida is blessed with a year-round tropical climate, making a full range of outdoor activities available all year long, including water sports, boating, fishing, diving, snorkeling, jet skiing, surfing, parasailing and canoeing or kayaking along paddling trails just a short walk from the seashore.

The conference will take place during the tail end of sea turtle nesting season. Each year from March through October sea turtles return to South Florida beaches to lay eggs. Nearly 90 percent of sea turtle nesting in the U.S. occurs in Florida. Sea turtle hatchlings use light and reflections from the moon to find their way to the water at night.

Beach visitors can help them during the nesting season by keeping beaches clean, being aware of nesting sites and reducing artificial lighting near beaches that can discourage adult females from nesting on the beach and confuse mothers and hatchlings. Although it is entirely unpredictable, a lucky attendee may get a chance to witness this natural phenomenon firsthand.
‍
South Florida is also home to The Seminole Tribe of Florida, which serves as the “Gateway to the Everglades.” At the Seminole’s Billie Swamp Safari within the Seminole Indian Reservation, history comes alive as explorers make their way through more than 2,200 lush acres of the Big Cypress Reservation.

The most exciting way to explore the “River of Grass” is by air boat. An airboat, also known as a fan boat, is a flat-bottomed vessel propelled in a forward direction by an aircraft-type propeller and powered by either an aircraft or automotive engine.

Speeding through the Florida Everglades, guides will point out the wildlife such as deer, water buffalo, bison, wild hogs, hawks, eagles and alligators in their natural habitat.
‍

People from around the world flock to South Florida to find the best deals at the Sawgrass Mills Mall, located just minutes away from the conference hotel. Sawgrass Mills is the largest outlet, value retail and entertainment destination in the U.S.

With more than 350 retailers including internationally recognized brand-name stores, full service-restaurants, entertainment venues and the region’s most sought-after luxury outlets, Sawgrass Mills offers something for the entire family to enjoy.
‍

With the mix of cultures in the South Florida area, dining is like entering a new world of tastes, sights, aromas, seasonings and sensations. It’s a place where everyone brings something to the table as the flavors of countless cultures are showcased on dining tables everywhere.

South Florida’s international flavor is enriched by the wide variety of cuisines found in its restaurants, including Cuban, Haitian, Peruvian, Colombian, Indian, Thai, Japanese, Argentinean and many more. Many restaurants combine different cultural cuisines for a whole new experience.
‍

South Florida is famous for its nightlife. Many celebrities call South Florida home, and even more come to have a good time. A short 20-minute cab ride will bring attendees into the heart of Miami’s famous South Beach. It has been called the American Riviera and an Art Deco Playground.

Yet there’s more than fine white sand to South Beach’s fantasyland of exuberant architecture. At night, South Beach comes alive with crowds dressed in party-casual chic. It is also the home of the Metropole Hotel Apartments, made [in]famous by the notorious party-loving cast of the Jersey Shore in their second season.
‍

See you in October!

With all that South Florida has to offer, everyone is sure to find something to love. The Medical Tourism Association™ is thrilled to finally bring the 5th edition of their annual Congress to its home state. This is definitely not the year to miss the World Medical Tourism and Global Healthcare Congress!
‍

Amelia Fernandez is the Global Congress Coordinator for the Medical Tourism Association™ with a focus on organizing the World Medical Tourism and Global Healthcare Congress. Her primary duties include developing the agenda, recruiting speakers and buyers to both the MTA’s annual Congress as well as other regional conferences around the world. She holds a degree in Sociology and Markets/Management from Duke University. Contact Amelia for more information on the Congress at Amelia@MedicalTourismCongress.com.