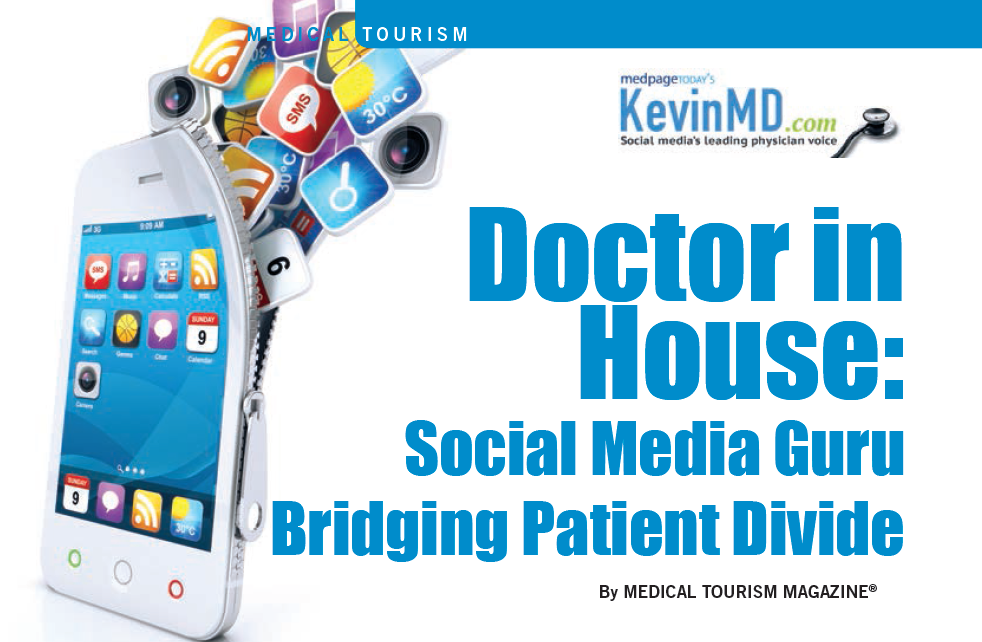 Almost half of all patients who use the Internet will search online for a physician, making social media a valuable tool to store in a doctor’s medical bag where mobile applications are becoming as common as a stethoscope.

Social media allows physicians to bridge the gap between patient and provider,” said Pho, founder and editor of KevinMD.com and featured speaker at the Medical Director’s Summit, held earlier this month at the 6th World Medical Tourism & Global Healthcare Congress, in Las Vegas. “Tools — like blogs, Facebook and Twitter — give doctors and patients the opportunity to directly connect with one another, share information, and see the healthcare system from each others’ perspective.”
‍

Platform to Be Heard

In turn, Pho said social media provides doctors with a platform to be heard.
‍

“No matter what country you’re from, healthcare around the world can be constantly improved and doctors need to be at the forefront of those changes,” said Pho, before more than 50 chief executives from leading healthcare facilities in 23 countries at Caesars Palace. “Social media gives them a voice, and a way to influence healthcare decision makers.”
‍

According to a 2011 study from the Journal of Medical Internet Research which surveyed primary care doctors and oncologists about their online habits, about 24 percent used social media for medical purposes including scanning headlines to curate news, as well as sharing reliable healthcare information to patients. The communications firm WCG reports about 17 percent of physicians in the United States are on Facebook, and 4 percent on Twitter.
‍

Pho said those figures should be higher. He said social media is a powerful tool that sets his practice apart from competing providers by allowing him to identify new patients he otherwise may never have had access to. In the past year, Pho said that 10-15 percent of his new patients learned of his practice because of his online presence. As more doctors turn to Google, he expects those numbers to grow.
‍

Physicians are using mobile applications in their practice more than ever before. Some functions of medical-based mobile apps include the ability to remotely view and update charts, coordinate schedules and appointments, place lab orders, access patient records and even prescribe medication.
‍

The Black Book Rankings recently reported that amongst physicians who use medical mobile apps on smartphones, 68 percent use iPhones while 31 percent use Android-based devices.

Perhaps not surprisingly, this preference for iOS extends beyond the smartphone realm and includes tablets as well. The survey found that 59 percent of physicians who use mobile apps do so on a tablet device, and from within that group, most prefer the iPad.

However, according to a Deloitte Center for Health Solutions 2013 Survey of U.S. Physicians found that the overall access to, or use of patient support tools is low among all physicians showing gaps in communication channels between physicians and their patients.

“Patient engagement has been identified to play an increasing role in meaningful use requirements of the Affordable Care Act,” said Renée-Marie Stephano, Founder and President of the Medical Tourism Association®. “Despite these incentives, doctors are still lacking in this capacity.

Physicians must take a more active role and take advantage of mobile communications that can improve their patient interactions and ensure that consumers are managers of their own care.”
‍

“Doctors are busy,” said Pho. “When I speak to physicians about social media, they cite the fact that they have to see patients, complete charts and, frankly, don’t see the value of social media.”
‍

There is also a perception in the medical community of risks, said Pho.

“Whenever you hear about social media in the healthcare setting, it’s often from media stories where doctors or nurses get fired because they use social media inappropriately,” he said. “Taking pictures of patients and posting them on Facebook, for example. Of course, if doctors see social media as a threat, they aren’t going to touch it. The last thing they need is one more thing to worry about it.”
‍

However, social media profiles heighten visibility on Google searches. For that reason, Pho said the more platforms doctors engage in, the more content they control in a Google search of their name. Information of which doctors cannot control, such as online patient reviews or negative news stories, will, as a result, receive less internet exposure.
‍

“The value of social media needs to be emphasized,” said Pho. “We need positive social media role models who can demonstrate how social media can be used to bridge the gap between provider and patient, share reliable health news, and humanize the medical profession by allowing doctors to tell their stories behind the scenes of healthcare.
‍

Healthcare executives, Pho said, also need to see the value, so they can provide the dedicated time or payment needed for doctors to create social media content. He said the narrative surrounding social media needs to be reframed from a perception of a risk to one of opportunity. Social media leaders need to speak out and accentuate the many positives of using social media in healthcare, he said.
‍

“I would first spend 45 minutes or so creating a LinkedIn profile, which is a digital translation of a resume,” said Pho. “And if that’s all you have time for, that’s fine.

LinkedIn profiles tend to be the most preferred by Google among the social media platforms. If you have the time, energy and interest, you can then engage in other social platforms, like blogs, Twitter or Facebook.

Doing so will expand your presence online, putting you more in control of information that patients access about you on the Web.”
‍

Pho said he could not pinpoint which social media site was utilized more than another, but recommended blogs, Twitter, Facebook, LinkedIn, YouTube, and Google+, which each have their own strengths and weaknesses, and can be chosen based on a doctor’s online goals.
‍

“Doctors should not become friends with patients on Facebook,” he said. “The personal information contained on a Facebook profile, such as pictures of kids or what you do on vacation, blurs the line between a physician’s personal and professional presence.”
‍

Pho suggests that doctors practice what he calls “dual citizenship,” which, he said, is recommended by major professional societies that write social media guidelines.
‍

“Close your personal Facebook profile to the public; only ‘friending’ close friends and family members,” he said. “Then create a separate public Facebook page where doctors can share reputable health links and stories. That page is a valuable platform for patients who may search for health information on Facebook.”
‍

Social media allows doctors to share their stories and insight that patients may not be aware of including physician burnout, the challenges of practicing medicine while raising families, or all the obstacles that prevent physicians from delivering the best care they can.
‍

“Occasionally, the media pits doctors and patients against one another, as if they’re adversaries,” said Pho. “Sharing stories on social media humanize doctors, and can sway the narratives that villainize the medical profession. After all, both doctors and patients are on the same side and want the same thing: to improve the healthcare system.”