Due Diligence in Facilitation 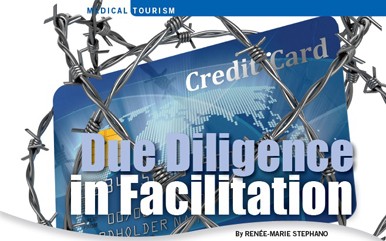 The Medical Tourism Industry has some great players in it. With amazing hospitals and clinics, a growing number of medical tourism facilitators using best practices and consultants leading the path, more and more players are in the news. But, who is doing their due diligence?

When it comes to making decisions about medical tourism providers and facilitators, it would seem essential that best practices, certifications and accreditation take an important role in ensuring patient safety and good patient outcomes.

Typically, the accreditation of the facility and credentials of the surgeon are at the forefront of the patient’s decision making process. With the growing interest from the employer market in establishing medical tourism programs, the use of a medical tourism facility may create an ease in matching patients with providers and effectuating a continuum of care.
‍

How does one choose a facilitator and what is the importance of due diligence in this selection process? A recent story that made headlines in the US brings this issue to light. The Hartford Courant reported on September 13th of this year that the City or Hartford cancelled its contract with Satori World Medical, a Medical Tourism Facilitator based in San Diego, California.
‍

On its website, Satori World Medical boasts itself as the “world’s first global healthcare network and service company specifically designed to deliver high quality healthcare services, share the tremendous cost savings with plan sponsors and their employees and coordinate all medical and travel services for individuals who need care.”
‍

According to a press release issued by Satori on June 30, 2011, Satori had gone through a competitive bidding process and was selected as the facilitator to provide the employees of the City of Hartford access to their international networks of physicians to save the City from 40-80% per procedure.

The City of Hartford Benefits Administrator Richard Pokorski stated, “We employ a large Hispanic workforce and having access to some of the best doctors and hospitals in Puerto Rico through Satori’s Global Network may be a very attractive option for their medical care.” Pokorski anticipated a 66% savings in healthcare costs as a result of the program. Until now.
‍

Kevin Rennie columnist of The Hartford Courant broke the story in August, pointing out that “Satori’s founder, president and chief executive officer Steven Lash was convicted of wire fraud and mail fraud in federal court and sentenced in 2004 to 51 months in prison.

Lash, who also was ordered to pay $36.4 million in restitution, had been the chief financial officer of FPA Medical Management, a San Diego company that reported record earnings before filing for bankruptcy in 1998, leaving patients, doctors and lenders in the lurch.”
‍

In a follow up story this month, columnist Vanessa De La Torree stated that the City sent a termination letter which effectively terminated services immediately, ending their contract officially on December 7, 2011. “The city decided to cancel the contract because of fraudulent behavior that was brought to light in Kevin Rennie’s opinion column,” city spokeswoman Sarah Barr said.

“When Satori World Medical Inc.  was confronted about Steven Lash’s prior convictions, the city was not satisfied with the answers it received and the contract was terminated.” (http://articles.courant.com/2011- 09-13/community/hc-hartford-satori-0913-20110912_1_ medical-tourism-health-care-costs-contract)
‍

A simple background check of Satori’s management could very well have prevented this type of event from occurring, which causes embarrassment to the City, detriment to the reputation of the industry and most importantly, a loss in opportunity for the City’s employees.

Companies responsible for the handling of patient’s healthcare should be required to be transparent in their business dealings. The Medical Tourism Association has been an advocate of Facilitator transparency from its inception.

The established best practices of its certification program require corporate transparency and background review, as the lives of patients are at stake. Without the proper processes and protocols in place to determine reputable companies from less reputable, anyone can put up a fancy website and seem legitimate.
‍

It is not uncommon for claims to be brought against a company or individual which may or may not be legitimate. However, it is important for the managers of patient benefits to take due diligence steps to protect the interests of their employees when offering healthcare benefits packages.

Employers, Insurance Companies and even hospitals expose themselves to significant and potentially absolute liability by working with unlicensed and unregulated medical tourism facilitators. An employer failing to perform due diligence on a company which holds a fiduciary duty to its employees could be catastrophic.
‍

What are the implications to this news? Satori has been reportedly quite successful at promoting its serves under the slogan of offering due diligence in its medical networks and expanding its medical directory boards. Most recently in July, 2011, The Pubic Employee Benefits Alliance (PEBA) selected Satori to implement medical tourism into their member employees programs.

In August 2011, Satori partnered with HealthEZ, a family-owned Minnesota-based health plan offering innovative services for companies with self-funded health plans. It also partners that same month with HealthFirst TPA, a Texas based Third Party Administrator to offer its clients and thousands of their employees access to its networks. HealthFirst TPA claims itself to be one of the most advanced TPA’s in the US.
‍

Sherry Laboratories in Indiana tied up with Satori in January 2011 for its employees also citing the reduction of costs as its motive. Imperial County Schools Voluntary Employees Benefits Association (ICSVEBA), a federally qualified employee benefits trust representing twelve school districts linked with Satori in November 2010. The list goes on. As more and more political subdivisions see the value in medical tourism, the effect of this news may be inhibitive to the industry’s growth.
‍

It should not matter how many news articles facilitators have been mentioned in, how many patients they say they have or who they say their clients are. At the end of the day, when something goes wrong, someone will be held accountable. Other pertinent issues that continually emerge in the industry pertaining to facilitation are:

Medical Tourism Facilitator Certification is critical to the survival of medical tourism facilitators and also important for the credibility of the industry. Facilitators need to be pro-active in establishing and maintaining best practices. One story like this may destroy all the hard work and credibility of not just quality hospitals and facilitators, but the industry as a whole, particularly for the future of the employer and insurance based medical tourism market.
‍

The Medical Tourism Association encourages its members to hold themselves to higher standards with the need to recognize and understand who the quality and long term players are. The moral of the story….know your partners and manage your risk for the sustainable long term.