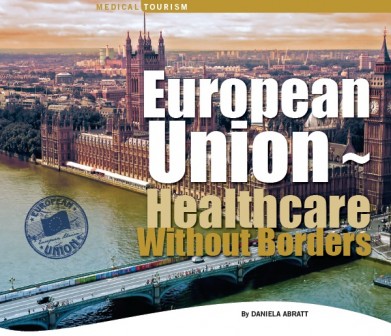 For a foreigner peering into the European realm the continent seems to function as a single entity a region that shares a currency a set of values an identity. So should healthcare be an added commonality? Unlike that of the United States Europes healthcare is universal. But up until the beginning of this year citizens did not have full access to their health rights.

A new wave of legislation will change the way Europeans travel for medicine. In a vote on Jan. 19 2011 the European Parliament approved the Cross- Border Healthcare Directive a law that will enable citizens within the European Union to travel more easily to member states to receive healthcare.The law has created a set of regulations for the free movement of patients payment policies and patient management while upholding citizens health rights.

We unified the different standards set by the European Court of Justice and we created thus a clear and objective system of references said EP President Jerzy Buzek. He told the EurActiv Network that the directive is a solid legal basis for dealing with cross-border healthcare in the EU that was hitherto in a legal gray zone.According to the Parliaments website 30 % of EU citizens are unaware of the availability of health services outside their country and 25 million citizens have rare diseases that require unique treatment facilities.

The law particularly helps these patients by facilitating easier access to specialized medical centers across the region. It also helps those who live on national borders because it makes travel more convenient and has provisions for efficient payment. The directive was first proposed in July 2008 followed by a preliminary reading in April 2009 and a second reading and revision in June 2010 according to the website.

The Parliament whose representatives are elected by the member states citizens and the European Council whose members represent the states interests settled on a compromise prior to Parliaments Jan. 19 vote.The Council will give its final approval around the end of February or beginning of March after which the directives text will be finalized and then translated into the 23 official languages of the member states.

It will then be published in the official journal.Though each member state is a sovereign entity it must conform to the EUs overriding rules. So at this point in the process each state has 30 months in which to implement the directive into its national law. Thus it should take effect by 2013.The aim is to clarify patients medical rights as set by the Court of Justice of the European Union said Françoise Grossetête a French Member of the European Parliament and the parliaments rapporteur to the EurActiv Network.

He said Parliament also wants to prevent direct or upfront payment of transnational fees.The directive is intended to mobilize patients not medical providers within the Union. Its text clarified that the law is not encouraging medical tourism but rather just ensuring its availability safety and quality when needed and used.Some private-clinic owners fear that their number of patients will drop as people leave in search for cheaper healthcare.

However studies show that people generally prefer to seek healthcare near their homes.Additionally patients will need to receive prior authorization from their national health systems in order to receive expensive treatment abroad or if they need to stay overnight in a hospital. This creates a management system to ensure that hospitals do not become overrun with patients and can manage their resources efficiently.

Each country can determine its own time period for approval something which concerns European Consumers Organization policy analyst Ophelie Spanneut. She worries the vague time range will create inequalities between countries so much so that the EU will eventually need to stipulate an enforced time limit.Monique Goyens director-general of the ECO agreed. She said that the unknown waiting periods for payments and reimbursements will also increase the inequality.

She believes the prior authorization is good but should not become an obstacle.Patients will be denied authorization only if the treatment can be quickly administered in the home country or if there is doubt about the credibility of the physician. Patients do not need to be authorized for small treatments or prescribed medicines.Parliament wanted to strengthen the cooperation between member states by developing e-health the use of communication and information technologies to share data and documents and by mutual recognition of prescriptions.

The Pharmaceutical Group of Europe expressed some concern for patient safety and its ability to assess and validate prescriptions. However it approved of the directives principle that grants them permission to refuse to fill a prescription for ethical reasons or in cases when authenticity or accuracy is questioned. The law also enables them to contact the prescriber directly.

Furthermore the directive requires each country to provide a detailed list of information about health providers prior authorization requirements and reimbursement procedures. Before the directive was enacted patients were able to travel for medical care but would not know the cost of their treatment abroad and if they would be refunded. Now patients will not have to pay their fees upfront. If they do not have prior authorization (i.e. for routine treatments or medications) they will be reimbursed at home-country rates.

This means that they will have to pay the difference if a treatment costs more abroad than it does at home. If they do have prior authorization (i.e. expensive procedures and treatments) they will need to pay at the rate of the country in which they received the service.Currently 1 % or 10 billion of public health budgets is spent on cross-border healthcare. The European Commission estimates that the cost will increase by 30 million per year under the new rules according to the EurActiv Network.

But Markus Frischhut a professor of international business and law at the Management Center Innsbruck in Austria believes an increase in costs is unlikely.States should be encouraged to work together to save money he said. Each country will be reimbursed the same amount as it would without the directive so there really shouldn be additional costs. Theres even the possibility to reduce costs.

Travel and hotel expenses will not be reimbursed refuting the concern that the directive promotes health tourism.Regardless of this measure Dutch MEP Kartika Liotard still believes the EU is treating healthcare like a marketable product one which can be exploited to increase revenue for the health tourism industry at the expense of quality care and patients rights. The new EU directive will mean that insurers drive patients abroad in search of cheaper treatment she told the EurActiv Network.

Patients from rich countries will be able to travel to less expensive poorer countries where there is a threat that care standards for locals will deteriorate to make room for profitable health tourism. Nigel Farage leader of the United Kingdom Independence Party is also concerned. He called the directive a bureaucratic nightmare bound for a series of monetary issues.The directive does not have any provisions that regulate the member states individual social security systems.

Gilles Pargneaux a member of the French Socialists and Democrats worries that this lack of regulation will emphasize the differences between a countrys home system and the new EU policy an incongruence which will ultimately become conflictual.But German MEP Dagmar Roth-Behrendt disagreed. She believes the EU has shaped the law to achieve a balance between the rights of patients and the protection of each nations financial and social security systems.

According to a 2010 study conducted by the World Health Organizations Regional Office for Europe health inequalities have been increasing for most European countries and most health indicators. Eastern European countries generally have higher inequalities than those in west and central Europe.The study found however that Portugal had the highest rate of inequality for men and one of the highest for women. Slovakia and Poland followed close behind.

The smallest inequalities for both men and women were found in Cyprus Iceland Belgium and Austria.The study compared the differences in average health and health distribution in each country and found no significant trade-off between the two. Thus it asserts that countries should be able to improve their overall health while reducing health inequalities among their socioeconomic classes. Fruschhut agreed.

He said that the directive prohibits states from discriminating against patients by country race or socioeconomic class. He said that any complications that occur most likely will arise from errors in public management.He clarified the necessity for the directive. The Court of Justice lists a number of fundamental freedoms one of which is the right of EU citizens to travel for medical needs.

But the EUs laws do not govern public health. Since the Court of Justice has primacy the EU had to develop a directive that would address this health freedom and apply it to all citizens regardless of their health status.He said the directive is certainly a positive step for progress but it is now up to the individual healthcare providers to implement it and decide its efficacy.

Daniela Abratt is a Communications Intern with a focus on Journalism for the Medical Tourism Association. She is currently pursuing a Bachelor of Science in Journalism with a minor in International Development and Humanitarian Assistance at the University of Florida where she is also a member of the Golden Key International Honour Society. Daniela writes for MTAs Medical Tourism Magazine and Health Tourism Magazine.