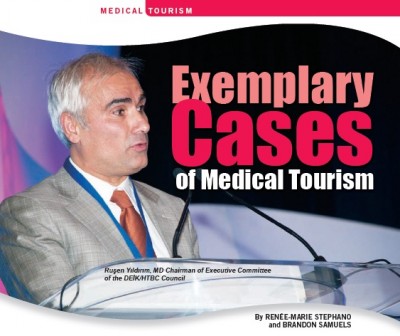 Within the patient-competitive and ever-developing arena of medical tourism, this year’s Congress identified four exemplary cases of medical tourism – Jordan, Turkey, Colombia and Taiwan – all of which provided insight into the branding, organizing and new capacity-building efforts that have been employed to offer their citizens and international clientele superlative healthcare services.
‍

Considered a premier healthcare destination among Arab countries, in 2008, the World Bank ranked this historic and culturally diverse kingdom of antiquity number one in the Middle East and North Africa and fifth worldwide as a medical tourism destination.
‍

“A tradition of healthcare, clinical excellence and the delivery of quality of care meeting U.S. standards is making Jordan quickly become an international leader and destination of choice for medical tourism from all over the world,” said Hashem Irshaid, Quality and Medical Tourism Consultant at Jordan Hospital and 2011 Congress speaker.
‍

Boasting 103 hospitals, 60 of which are private and eight that are accredited by the Joint Commission International (JCI), – an organization that evaluates compliance with federal regulations – Jordan is seeing a 10% increase in foreign patients each year.

Factors such as no wait period, potential cost savings on procedures of up to 90% (compared to the U.S.) along with multilingual English-speaking hospital staffs all comprise some of the various drivers of medical tourism in the area. Alongside the JCI, Jordan has also implemented its own national accreditation association – Health Care Accreditation Council (HCAC).
‍

Though Jordan has already earned widespread acclaim for its world-renowned facilities such as the resort-like Specialty Hospital, which receives patients from more than 48 countries, more recently, new stars have appeared on the horizon.
‍

The Jordan Hospital, which employs cutting-edge diagnostic and interventional technology, is a comprehensive 300-bed multi-specialty hospital equipped with state of the art healthcare services ranging from, but not limited to, cardiac care, fertility and IVF, orthopedics, neuro-navigation and robotic surgery.
‍

“Implementation of clinical practice guidelines based on the best available scientific evidence guidelines, together with measuring quality monitors and indicators are an ongoing process at JH to ensure clinical excellence and delivery of high quality of care,” said Irshaid.
‍

Conscious of accountability, Jordan’s Infection Control Program statistics indicate that overall healthcare associated rates at Jordan Hospital were below international benchmarks, with an average surgical site infection rate that has consistently remained lower than more than half that of the global standard since 2007.
‍

Irshaid commented in his presentation that the expansive score of services available at Jordan Hospital such as the expertise of physicians, the advanced technology, dedication to quality in patient care, the infection control programs, and the positive patient outcomes have clearly made Jordan Hospital a world class healthcare facility.
‍

With a record of safe, outstanding and innovative healthcare, Jordan is at the pinnacle of clinical excellence. Add to it a varied assortment of inimitable touristic offerings from historical sight-seeing in Petra (one of the New Seven World Wonders) to Dead Sea excursions; Jordan is an exemplary leader as a successful destination of choice in global healthcare and medical tourism.
‍

Turkey is the transcontinental glue between Europe and Asia with a cemented reputation in advanced medicine and first-rate healthcare. Bordered by eight countries and engendered with a remarkable blend of Eastern and Western traditions, this coast to- coast Republic has the highest number of internationally accredited hospitals in the world.
‍

More than 200,000 patients seek the comfort and quality of services in hospitals from Istanbul and Ankara all the way to the coastal city of Izmir, in an effort to take advantage of Turkey’s modern and high tech European-standard hospitals.
‍

Recognizing the growth and potential of the country’s medical tourism sector, the Health Tourism Business Council (HTBC) was established in 2010.
‍

“The council helps to build better branding and recognition of Turkish health tourism,” said Dr. I RuÅŸen YÄ±ldÄ±rÄ±m, MD Chairman of Executive Committee of the DEÄ°K/HTBC Council and 2011 Congress speaker.

‍
While a number of strategic imperatives targeted at establishing Turkey as a prime medical travel destination continue to link foreign resources and local providers, the HTBC has inaugurated a patient-oriented attitude that draws medical travel visitors who are uninsured or cannot afford treatment (or afford to wait) in their home countries – primarily Western and European countries – as well as patients who cannot receive treatment due to a lack of technology and/ or infrastructure in their countries (e.g. – Middle East, Balkans, and former Soviet Republics).
‍

Cost savings is another prominent feature – travelers can save more than 90% on procedures such as coronary artery bypass surgery (compared to U.S.).
‍

Overall, thanks to rapid development, widespread accreditation and value-added services connecting the medicinal with travel, Turkey has become a prototype of successful medical tourism.
‍

Taiwan – Tiger of the Pacific

Right off the southeastern mainland coast of China, Taiwan occupies a critical location in East Asia and the Western Pacific. Noted for its economic prowess, it is considered one of the “Four Asian Tigers” (next to South Korea, Hong Kong and Singapore) – a term that makes reference to the rapid economic development of such countries after World War II, provoking swift and steadied industrialization.
‍

Recently, Taiwan has become a new destination for medical tourists. Garnering international distinction in procedures such as cranial reconstruction, organ transplant, cardiovascular therapy and assisted reproductive therapy, among others, in 2007, an IMD global competitiveness ranking placed Taiwan’s healthcare infrastructure at 13 (out of 55 countries).
‍

Such advanced medical procedures and a growing healthcare reputation has enticed foreign patients from different countries to seek out medical tourism on the island.
‍

While some of Taiwan’s other acclaims lie in its affordability, language, culture and special disease treatment, one probing question still remains – What’s the secret to successfully internationalizing medical services?
‍

So far, Asian countries such as Singapore, Thailand and India have pioneered medical tourism effectively.
‍

In the case of Taiwan, like many other countries, its international marketing scheme starts at the governmental level. Strategies such as quality promotion, health equalization, and financial support or incentives are crucial components in promoting the country as a medical destination.
‍

Mainly, governmental policies and assistance strive to build up Taiwan’s brand of medical travel, along with promoting international cooperation for member health organizations and improving legal processes such as loosening restrictions on medical advertising.
‍

Another approach, however, is largely patient-oriented.

Poised to be a key player, strategic markets in the internationalization of Taiwan’s medical services emphasize places within a four-hour flight, with China as a primary objective.
‍

From a business model standpoint, Taiwan is well on its way to being a vital competitor in Asia, but as an exemplary leader in advanced medicine and first-class healthcare, the path has already been paved.
‍

Colombia – A Diversity of Life

Unlike its fully industrialized counterparts, Colombia provides a distinguishing and exclusive example of world healthcare services in a third world.
‍

“[It] has built a reputation for the highest specialty of care in Latin America and is growing its reputation above and beyond the continent,” said Dr. Victor Castillo, CEO of Fundación Cardiovascular de Colombia (FCV), at the 2011 Congress.
‍

Thus in recognizing potential for leadership, the Colombian government has made a strong commitment to global healthcare.
‍

Current initiatives seek to: “Increase levels of bilingualism; evaluate and adjust the quality standards for the export of health services; and improve efficiency and expand capacity as well as develop products, services and world class infrastructure to wellness,” said Castillo.
‍

Starting with human capital, projects such as incorporating bilingual programs and skills development for the health and wellness industry and implementation of medical tourism programs at public and private universities evidence an investment in the quality of healthcare providers and professionals.
‍

Promotionally, endeavors aimed to position Colombia as a chief medical destination include international marketing and missions of medical cooperation by agencies such as Proexport Colombia, which hosts conventions, special events and FAM (country familiarization) trips for health service buyers.

‍
Significant advancement has also been made with regard to infrastructure enhancement. Development of free zones for healthcare services, expansion of clinics and renovation projects make up a few of the ongoing efforts.
‍

With a progress-oriented outlook, the Colombian government hopes that by 2032 Colombia will be a world leader in medical tourism, generating revenues of more than $6 billion based on competitive costs, high quality and innovation.
‍

Indicative of these forward-thinking policies, the FCV’s newest project – the Colombian International Hospital – will include a hotel and convention center with a 1,800 participant capacity. The hospital is estimated to house 480 total beds, a spa, restaurant, bar, gym and swimming pool.
‍

Although Colombia might be a developing nation, its healthcare services and multidimensional visionary strategies make it a rising leader for international medical travel.
‍

Representatives from each of these countries traveled to the Windy City to present exemplary cases of medical tourism at the 4th World Medical Tourism & Global Healthcare Congress. More than a clear demonstration of the steadily increasing popularity and rising demand for medical tourism services, such growing awareness underscores the importance of programs and resources aimed at drawing consumers from all over the world to reap the benefits of premium, high quality hospital services and economically-sensible travel at reduced prices.
‍

Brandon Samuels is a graduate of Northwestern University’s Medill School of Journalism and is a contributor to the editorial staff for the Medical Tourism AssociationTM. Developing an early interest in health, Brandon completed a four-year Medical Magnet Careers program, which led to experience working in areas of nursing, radiology and dermatology.