Expensive Medical Bills More Americans Can Bank on It 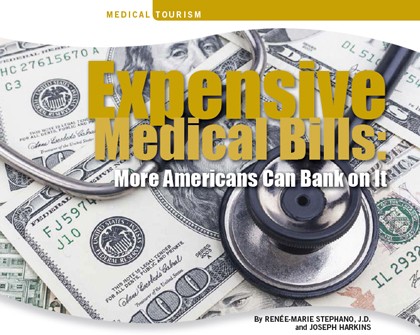 The findings are from NerdWallet Health, a division of the price-comparison website, which analyzed data from the U.S. Census, Centers for Disease Control, the federal court system and the Commonwealth Fund, a private foundation that promotes access, quality and efficiency in the healthcare system.
‍

Threats of financial delinquency have prompted about 2.5 million Americans to think-twice and decide not take medications they cannot afford as a short-term fix that most often triggers more expensive visits to the emergency room down the road.
‍

Even Americans who don’t file for bankruptcy struggle to pay their medical bills. NerdWallet found that about 56 million adults — more than 20 percent of the population between the ages of 19 and 64 —will grapple with payments.
‍

Not all Coverage Eases Pain

Not all health insurance plans ease the pain, either. The study estimates that nearly 10 million adults with year-round health insurance coverage will still accumulate medical bills they can’t pay off this year.
‍

High-deductible insurance plans requiring consumers to pay more out-of-pocket costs are a challenge for many households. The average American family, say for example, one that brings home $50,000 in income, can quickly find a high medical bill and a high-deductible insurance plan more than they can handle. Out-of-pocket maximums of $5,000-$10,000 can sometimes make the situation that much more insurmountable
‍

With millions buried under medical bills, more insured under the Affordable Care Act will not completely solve that problem, experts say.
‍

Even Americans who don’t file for bankruptcy struggle to pay their medical bills.
‍

“Even though healthcare reform will most likely give more people insurance, millions of Americans who buy policies individually may have less coverage,” said Jonathan Edelheit, President of the Healthcare Reform Center & Policy Institute. “Medical debt isn’t going to just go away.

For most people, purchasing insurance will come down to what’s good for their bottom line. The plan they choose will depend on their health, the premiums they can afford, and the budget they have to work from.”
‍

The number of households forecast to file for medical related bankruptcies this year is slightly lower than those at the height of the recession. Despite the anticipated 2013 dip, such bankruptcies represent about three out of every five filings.
‍

More than 11 million Americans are predicted to bail out medical costs by taking on additional credit-card debt. Because the temporary solution often charges high interest rates for unpaid balances, debt has a tendency to mount, creating a vicious cycle for consumers.
‍

Meanwhile, NerdWallet found 15 million people will deplete their savings to cover medical bills. Another 10 million will be unable to pay for necessities including rent, food and utilities because of those bills
‍

The United States is notorious for high medical care costs. According to a recent report of the Organization for Economic Cooperation and Development (OECD), the United States spends more on healthcare – almost 18 percent of its gross domestic product – than any of the 34 OECD countries, far outpacing the Netherlands, which is second at 12 percent.
‍

The good news is that medical research, which consumes a large chunk of healthcare spending, has paid dividends. For example, the United States has a higher five-year survival rate for breast and colorectal cancer than most any nation in the world.
‍

More than 11 million Americans are predicted to bail out medical costs by taking on additional credit-card debt. Because the temporary solution often charges high interest rates for unpaid balances, debt has a tendency to mount, creating a vicious cycle for consumers.

However, costs related to medicine, procedures and insurance continue to pull at the purse springs of any positive outcomes. A Commonwealth Fund study found that in the United States, on average, a hip replacement costs about four times as much as one in France, and a Caesarian section about three times more than one in New Zealand or England.

The report also showed that the common nasal spray, Nasonex, costs about $108 in the United States compared to just $21 in Spain. Moreover, Americans pay about three times as much for a hospital stay as patients in other developed countries do.
‍

In response, many patients are flocking overseas to pursue medical tourism opportunities which offer procedures and treatments in top-notch facilities for less than half the price than those in the United States.
‍

The International Federation of Health Plans offers a strong rational. The global network of health insurers compiled a list of drug, scan and procedure prices and found that the United States topped each category as most expensive.
‍

“It all comes down to market share, and very rarely is anyone looking out for the patient,” Dr. Jeffrey Rice, chief executive of Healthcare Blue Book, which tracks commercial insurance payments, told the New York Times. “People think it’s like other purchases: that if you pay more you get a better car. But, in medicine, it’s not like that.”
‍

The American healthcare system can act like a public utility where fees are negotiated with providers and insurers nationwide. Medicare, for example, is supposed to negotiate for low prices, but often those costs exclude incidental fees, such as facility costs.
‍

Colonoscopies, once performed in a doctor’s office, are now administered instead in specialty outpatient centers, where additional facility fees are passed on to insurers. Other fees are tacked on, too, including those for an anesthesiologist, wristband, and preoperative testing. Costs not considered out-of-pocket eventually find their way into added patient premiums.
‍

Some countries, including Austria, continue to perform presurgical testing – like colonoscopies — in doctors’ offices to keep costs down. Other nations counteract rising healthcare prices by using a common fee schedule so that hospitals, doctors and health services are paid similar rates for most of their patients. In contrast, healthcare services in the United States are paid depending on the patient’s insurance, making cost-containment that much more difficult.
‍

France and Japan also have programs that keep fees flexible. France monitors spending across all services, and if a certain area is growing faster than expected, it can intervene and lower the price for that service.

Japan has a similar process. But, the system in the United States is far less flexible because many payment rates are statutory and cannot change without congressional approval.