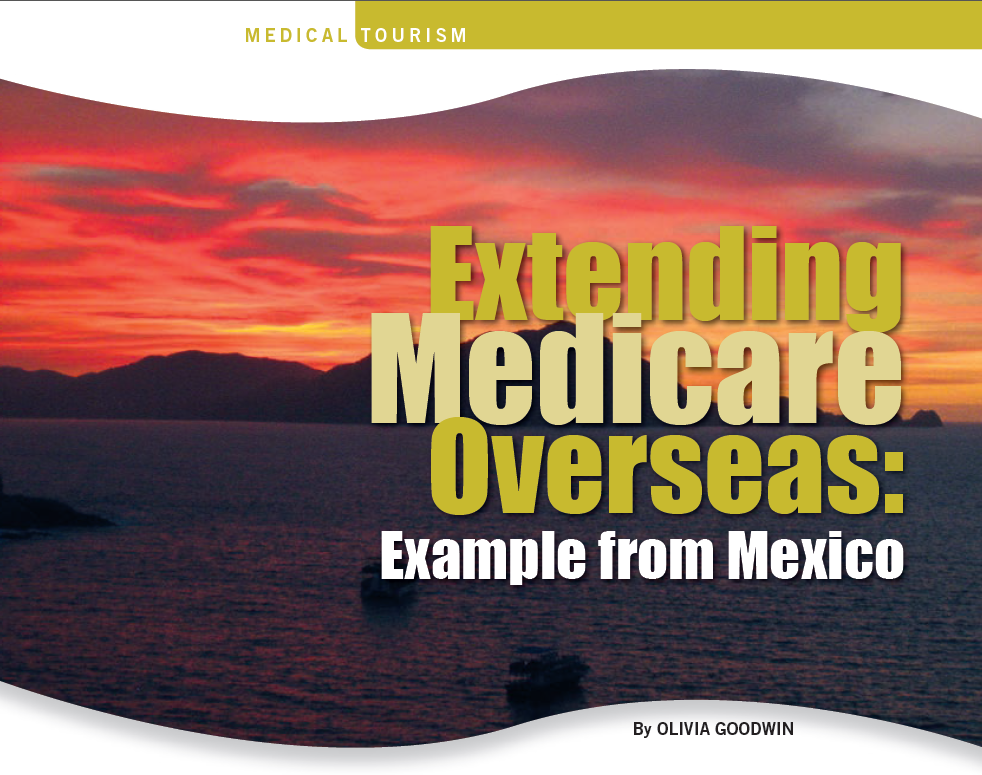 Travel is universally considered as something everyone loves, and the possibilities can be endless. Living abroad is also something people desire, whether it is a student-exchange program, a college study abroad or something that makes the most financial sense to stretch a dollar. Despite the popularity of travel, the U.S. government hasn’t adjusted Medicare offerings to include coverage overseas. Imagine the possibilities if it did?

I personally jumped on the living abroad bandwagon following a first-hand experience with two retirees from the United States, both of whom reside in Mexico.

About a year ago, I decided to move to Manzanillo, Colima, Mexico. My initial goal was to learn the language. I was a bit naive in thinking that by living in Mexico, I would learn how to speak Spanish. After all, living with three people that speak English — husband, wife and caretaker — made practicing my Spanish infrequent.

This small town on the Pacific Ocean is full of retirees, most of who are from the United States and Canada. They have everything they need including an international bank, language schools, Office Depot, Home Depot and even Starbucks! Many workers here speak English as well.

Most restaurants even offer menus in English. I feel right at home. As an employee of the Medical Tourism Association® for two years, I found learning about healthcare in another country to be fascinating.
‍

South of the Border

About 50 years ago, a young couple from Texas got married and decided to travel to Mexico for their honeymoon. Little did they know they would soon fall in love with life south of the Border? Following the honeymoon and new joy, they decided to spend their lives traveling back and forth from the United States to Mexico.

During their travels, the couple became fluent in Spanish. Aside from their love of the country, the other reasons they decided to spend their retirement years in Mexico was due to the poor health of the woman, Madeline. The inexpensive cost of living had a lot more to offer as well.
‍

Madeline, age 75, suffered from severe bi-polar disorder and had emphysema and a heart condition as well following years of smoking heavily. Even though living in the United States would guarantee her healthcare with little added costs, she required full-time care for mental health issues. The cost to house a caretaker is $5,000 Mexican pesos (MXN) per week, or a little more than $400 USD. The cost is significantly lower
‍

Even though they pay out-of-pocket for all healthcare needs, prices are not high enough to make living in Mexico financially unreasonable. For minor health issues, the couple stays in Mexico, but for the major procedures, such as surgery, they wait until they are able to travel to the United States where they have insurance coverage. For example, Tom, who is 81, needed open-heart surgery a few years back. He traveled to his hometown in Texas for the operation.
‍

When Madeline came down with pneumonia, she required a four-day hospital stay. Most of the hospital staff spoke English. The hospital bill for four days was $35,000 MXN (around $3,000 USD); that price included everything.

Following her return home, Madeline and Tom contacted their Medicare provider, who, of course, denied her claim. If she had been living in the United States or traveled from Mexico for care, Medicare would have covered her expenses. But, I’m sure the price would have been much more than $3,000.
‍

Because of her emphysema Madeline requires being on oxygen full-time and has been advised not to fly. So, instead of complications travelling to the United States where her care would be covered, she opted to pay the out-of-pocket costs.
‍

In addition to her hospital stay, I was with Madeline for her dental procedures. The dentist spoke English and had even attended a conference in my hometown of Palm Beach Gardens, Florida. She required a root canal at a cost of around $300 USD. For her follow-up visit, she was too ill to travel. Instead, the dentist stopped by the house to check on her on his way home.
‍

Medicare doesn’t provide reimbursement for healthcare overseas, except in a few cases where veterans or retired federal employees are involved.

During my time in Mexico, I have assisted Madeline with several health issues. Each time, I am surprised at the quality and cost of the care she receives. I am hoping that if a more serious health condition arises and she needs an expensive surgery, Madeline will be well enough to travel to the United States rather than have to pay thousands of dollars in out-of-pocket expenses for the care she might need.
‍

Medicare doesn’t provide reimbursement for healthcare overseas, except in a few cases where veterans or retired federal employees are involved. Should Madeline need to travel home to the United States for surgery, the government would rather Madeline pay for her plane ticket and lodging and then have Medicare pick up the expense for surgery and medication. The federal government is not required to reimburse Madeline should she have a procedure in a local hospital in Mexico.
‍

In addition to her age and limited mobility, Madeline and Tom paid into Medicare for years when they lived and worked in the United States.

Now that they have retired to Mexico where they live comfortably and within their budget, Madeline and Tom cannot benefit from their Medicare contributions.

Because Madeline shouldn’t be traveling, she is more than likely to delay any medical procedure until she has the funds to pay for a trip to the United States; thus, creating a greater burden on the government which will have to pay the cost of treating a more advanced condition.
‍

If Madeline’s health deteriorates and her out-of-pocket costs for pharmaceuticals in Mexico rise from the current $200, she will think about permanently moving to the United States where she can receive medical coverage.
‍

Madeline’s situation is not unlike that of more than halfa- million retired Americans who live overseas and deal with healthcare issues. As more Americans struggle to save enough to retire and live comfortably on social security, a move overseas may become more than an afterthought.

Studies show more Americans choose to live abroad until the age of 72, and then return to live in the United States as their health worsens and their ability to afford out-of-pocket expenses lessens.

Until that time, they must still pay Medicare premiums or will be penalized if they choose to enrol again.
‍

About 50 million Americans receive Medicare benefits, and that number is increasing. The government spends $549 billion on Medicare annually, and that cost is also increasing.

Original Medicare provisions date back to in 1966, when the cost of living and life expectancy was significantly lower. The Center for Medicare Portability (CMP), a non-partisan, independent 501(c) (4) non-profit organization is updating these outdated rules and regulations to meet today’s healthcare demands3.
‍

In collaboration with a major U.S. university, CMP is identifying options to establish Medicare portability.
‍

Several insurance companies offer international health plan options. Some employers also provide healthcare coverage to expatriate employees, proving there are ways to ensure safe and efficient medical care in foreign destinations. Someday, perhaps, the rules of Medicare will be reformed and thousands of Americans can choose to live overseas without worrying about healthcare coverage.