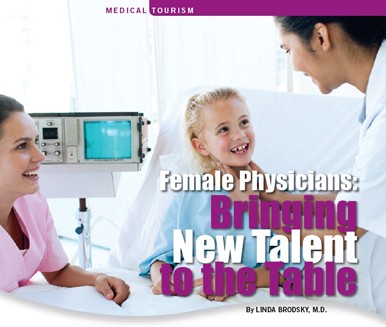 Medical tourism is an emerging market, and as such, it is a blank slate. Creative approaches to maximizing its growth and success means understanding two of the key stakeholders – physicians and patients.

Women are the fastest growing demographic not only as key utilizers for their families, their partners and themselves, but also as female physicians. It is estimated that at least 75 percent of all healthcare decisions are made by women and that 50 percent of all medical students and 30 percent of all physicians are women (40 percent for young physicians).
‍

Lessons can be learned from the auto industry, for instance. Women are buying cars at a greater rate than men. The auto industry took note and began to design the product with women in mind. They then started to hire women automobile salespeople. Adaptation to the changing market required a change in the “care provider.” And women care providers had a different style and means to deliver the service.
‍

Research has shown that in many instances women prefer women physicians, especially when it comes to “intimate” evaluations such as gynecological examinations and colonoscopies. Mothers of children often look for a woman physician to “care for and care about” their children.
‍

Why? Women physicians tend to engage the patient in non-medical conversations, put them at ease more readily and take time to listen. This style of physician-patient interaction can be especially important to patients who travel great distances to receive medical care.

They are already in a strange place without many of their usual support services. Having a warm and caring approach will make a real difference. Attention to culturally sensitive issues also helps women physicians accommodate to patients.
‍

Women physicians are in demand. This growing group is a rich source of untapped talent, one that is overlooked where the stereotype of a physician, particularly a surgeon, evokes a picture of the male superstar with large muscles and an even larger ego.

Surveys by the Women’s Physician Congress and the Women in Otolaryngology have provided some clues. They want challenges and the opportunities to be active and appreciated members of their healthcare team. They want their voices to be heard in not only the planning but also the execution of new ideas and new practices.

They want to be leaders and have opportunities for advancement. Women physicians (as do all women) also want to be compensated fairly. In 2011, the Health Affairs journal released a study, “The $16,819 Pay Gap For Newly Trained Physicians:

The Unexplained Trend Of Men Earning More Than Women”, which showed that on average, women physicians have starting salaries almost $17,000 less than men, even after controlling for all relevant variables. The medical tourism industry needs to be cognizant and vigilant to avoid these disparities if it wants to attract and keep top talent.
‍

Women physicians want to enjoy their work and have flexibility to integrate work and other parts of their life more seamlessly. Their abilities to be flexible will be reflected in their willingness to develop new models of healthcare delivery.
‍

How does this align with the medical tourism industry? Consider these five qualities of women physicians:

As medical tourism emerges as a new model of healthcare, relying on the old structures, rigid hierarchies, worn out policies, and male dominated cultures in medicine will not result in gaining access to woman physicians. It’s time to take advantage of the fastest growing demographic in healthcare. Cater to women patients and to women physicians. They are the future because women (and many male) patients prefer women physicians.
‍

Create winning teams that include women physicians. Companies that have diverse leadership are more successful than those who do not (evidence?). And, finally, remember that women physicians will play a large role in this new and exciting world of medical tourism. Understand their needs and attract the top talent for your success.
‍

Linda Brodsky, MD is an internationally-renowned pediatric otolaryngologist and founder of Expediting the Inevitable, an organization dedicated to changing the way the healthcare marketplace and women physicians engage to achieve business growth and clinical excellence.

Linda spent 25 years building a well-respected department at the Children’s Hospital of Buffalo, and was the first women ever, in any surgical department, to be promoted to tenured full professor of otolaryngology and pediatrics at the State University of New York at Buffalo.

At the top of her career, she became aware of information that led her to believe that she was a victim of gender discrimination, and she spent the next 10 years fighting her way through a legal labyrinth. Since the resolution of her legal battles in 2007 and 2008, she has devoted her energies to changing the status quo for the next generation of women physicians and the patients they serve. Linda can be reached at Linda@ExpeditingTheInevitable.com.