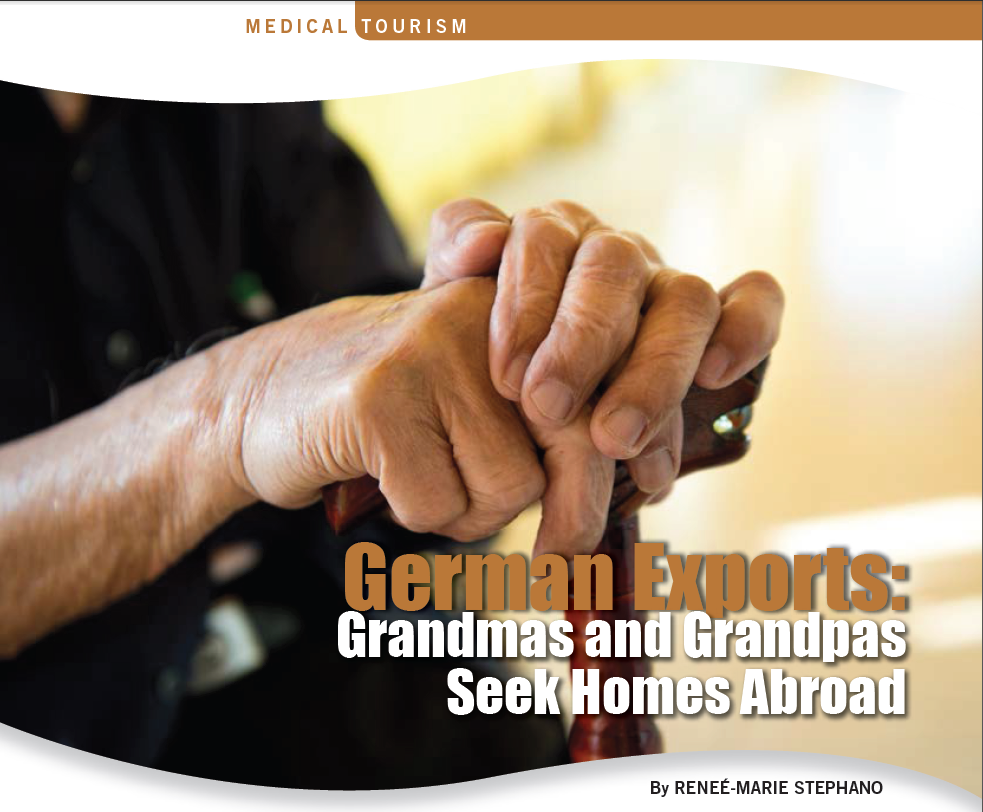 An elderly woman gingerly walks along a shopping mall in Berlin, looking to cross the street. Although the fall air has comfortably graced the autumn of her life, on this day she may soon find herself not reaching for the nearest curb, but rather beyond national borders to countries like Austria, Poland and Slovakia, among others in the European Union where some of Germany’s growing senior population are finding nursing care to be not only more affordable, but friendly as well.

Often too frail to live on their own, grandmothers and grandfathers across Germany are forsaking long-term care in their country of origin for the personal and round-the-clock attention that makes nursing facilities abroad feel more like home.
‍

Long considered a pillar of the country’s welfare model, Germany’s extended care system is one of only a handful offered by nations worldwide – Japan, Korea and the Netherlands, the others – that provides financial protection to citizens who cannot live independently because of their age.
‍

Cost and care are driving the early exodus from Germany. That there aren’t enough nurses to provide adequate treatment doesn’t help.
‍

The shortage is expected to increase. A study found that Germany will need to add capacity to accommodate 3.2 million patients entering nursing homes and in-patient facilities by 2030. The rapidly aging population will drive the demand for 371,000 in-patient beds, 157,000 more nurses and 331,000 additional health workers within the same period.

The “2013 Nursing and Medical Home Report” by Accenture, Rheinisch- Westfalisches Institut fur Wirtschaftsforschung and the Institute for Healthcare Business, shows Germany will need to invest between 54-73 billion euros to manage the influx of new patients entering in-patient facilities by 2030.
‍

Caregivers speak German, the elevator announcement is in German, residents dine on classic German cuisine and German soccer stars race back and forth on a large-screen television.

The World Health Organization calls Germany a “demographic time bomb.” Alarmingly so, almost a third of all Germans — by 2050 – will climb to 65 years or older. Many will be in need of nursing care, a situation made more troublesome because nursing care, experts agree, is looked upon as a less than- attractive profession.
‍

“Working in the nursing sector needs to become more attractive to meet the shortage of trained nurses,” said Sebastian Krolop, M.D., managing director of Accenture’s health business and co-author of the study. “However, this means the compensation needs to rise and health systems need to increase operational productivity so nurses can focus more on patient care.”
‍

Sonja Miskulin can’t remember the nine-hour trip she took to Poland from the German home she left behind forever. Dementia has gotten the best of the wheelchair bound 94-yearold, who was sent north by her daughter in the hope of a better life and less expensive care.
‍

Exporting grandmas like Miskulin has global implications beyond Deutschland, where one in five seniors already consider traveling abroad to culminate their lives in a nursing home. All countries are aging. The United Nations estimates that the world’s population over 60 years of age will grow to 2 billion by 2050.

By that time, Germany will have the oldest population in the world (Organization for Economic Cooperation and Development), second only to Japan. As life expectancies increase in industrialized nations like Germany, Japan and Italy, the cost of nursing care is becoming prohibitive for a global generation of baby boomers entering old age.
‍

In Germany, where the price of senior care is softened by government assistance, spending on the elderly is expected to increase from 1.4 percent of gross domestic product to 3.3 percent of GDP by 2060, the European Commission reported. Long-term nursing insurance in Germany is predicated on the equal contribution between employees and employers — roughly 2 percent of an individual’s income. But, the model, designed by Chancellor Otto von Bismarck 120 years ago, has exposed limitations with its own age.
‍

Leonard Tegls sits among a group of German and Polish residents at a nursing home in Szklarska, a mountain town in Poland. As he moves Scrabble pieces, Polish workers serenade him with hugs, smiles and encouragement.

Tegls told NPR that his stepdaughter brought him to Poland, 500 miles from the German town of Moenchengladbach, after he could no longer fend for himself and she did not have room to take him. He is one of 10 German seniors at the Sun House, and that number is expected double soon.
‍

“Our treatment isn’t different than what is offered in Germany,” Helena Grab, director at the Sun House, said to NPR. “But, what German relatives of the patients tell us is that it’s much more warm-hearted. We treat them in a friendly and hands-on manner. We knock on the door before we go into rooms. This approach appeals to our patients’ loved ones.”
‍

Not all on Board

Not all Germans are on board with their seniors packing up and leaving. A TNS Emnid poll found that more than 4 of every 5 Germans reject the idea of elderly citizens spending their final years in Poland or nearby Slovakia, another country to which seniors are moving. Munich’s leading newspaper Suedeutsche branded the trend as “gerontologic colonialism and featured a cartoon depicting Germans traveling eastward on walkers, in wheelchairs, and on hospital beds.
‍

Klaus Pawletko, of the Berlin-based Friends of the Elderly, blames the German senior migration on inexpensive facilities abroad and relatives determined to protect their inheritance. He said sending elderly Germans to a foreign country makes them feel cast off.
‍

As seniors exit, the German economy prods along. One in 10 Germans are unemployed. Jobs once considered life-long are expected to be gone before new ones emerge.

The search for employment has broken families, meaning more women have to work and are unable to care or look after older parents like their mothers did.

A new generation of retirees will have more problems than planned for.
‍

While nursing home costs have escalated, to some $3,800 per month in Germany, pensions have relatively remained the same.

Arthur Frank, founder of the Senior Palace in Slovakia, told the Christian Science Monitor that his five homes cost between $1,300 and $1,800 per month.

Germans can either get their nursing home costs partially covered or receive a lump sum, of roughly $910, that can be used by relatives.

A good number of relatives opt for the larger sum and forgo nursing home care.

European Union law forbids German insurance funds from establishing deals with nursing homes abroad, in part, because regulating quality of care then becomes difficult. But, free movement is a reality in the EU.

Experts say the number of people traveling to other countries will be limited – about 5,000 per year – but is still a worrisome sign. Small steps to lift obstacles that keep the elderly from remaining independent could curb the exodus, but not all are on the same page.
‍

Polish entrepreneurs and owners of resorts look at elderly Germans with money in the bank and see opportunity. Facilities that once saw better days, now welcome Germans with a little bit of Germany.
‍

At the nursing home in Zabelkow, a Polish town once ruled by Austria’s Habsburg Empire and by Prussia, caregivers speak German, the elevator announcement is in German, residents dine on classic German cuisine and German soccer stars race back and forth on a large-screen television.

Fabrice Gerdes, who managed the opening in March, told Bloomberg News that the home has filled its 34 beds and is finishing six more rooms that are already spoken for – in German, of course.
‍

“We have significantly beaten the goals we set for ourselves,” said Gerdes.

In the end, sending grandma and grandpa across the border may spring more problems than an early frost. Good care in the Czech Republic can mean a 10-year wait. How soon before the natives in Slovakia get restless is only a matter of time – in the Europe Union, in Japan, or – for that matter – anywhere in the world where elderly populations grow and sound, affordable care diminishes?
‍

Dimitrios Kalantzis says his 82-year-old grandmother is unable to care for herself. She spent the majority of her adult life in Germany, where she moved to from Greece decades ago to work in a factory with her husband. Kalantzis says his grandfather died in 1994 and his grandmother traveled to the United States to live in Brooklyn with his mother.
‍

There are about 10 million people in the United States taking care of elderly parents. Dimitrios Kalantzis said being a full-time caregiver can take a toll on someone who already has a full-time job. He knows. His mother does both.