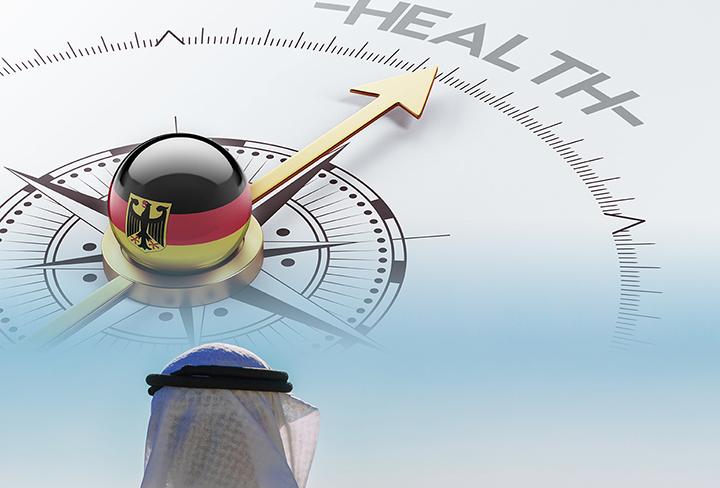 A middle-aged man sporting a moustache, Bermuda shorts, white socks and sandals steps out of a blue Volkswagen and is waved inside. Sheik Abudulrahman al Mutaf looks more like the vacationing banker and marine biologist that he is until his wife, dressed in a black burqa, follows him out of the van.
‍

For the past two decades, the couple from Qatar has been travelling to Elisee Clinic in Bad Godesberg, a town just south of Bonn that has earned a warm reputation among Arab patients seeking medical tourism services. To the sheik and his wife, accessing a high-level of medical treatment can be a status symbol of sorts, making a trip to Germany for other Middle Easterners like them status quo.
‍

As many as 77,000 foreign patients from 178 countries visit Germany annually for medical care, the government reports. Another 115,000 arrive for ambulatory care. Medical tourism Arab patients are particularly fond of German healthcare including thousands who hail from the United Arab Emirates, Saudi Arabia, Kuwait, Qatar and Oman.
‍

Some German hospitals – there are some 200 including 30 university-based – have already adapted an international focus that caters to patients from Gulf Cooperative Council nations. Translation services and support, separate prayer rooms and accommodations for travelling relatives, friends and medical personal have made looking after Arabs a prime consideration among healthcare providers who seek to capitalize on the medical tourism patient experience.
‍

In turn, wealthy Arabs, who would traditionally take advantage of well-connected flights to Germany to avoid the blistering summer heat at home, are now scheduling vacations abroad around medical treatment, not only for oncology, neurosurgery and cardiology, but preventative care as well.
‍

Population growth coupled with precarious lifestyle habits have put increasing pressure on Arab states to deliver treatments to nationals and expatriates for chronic disease from a healthcare infrastructure that is already committed to attracting more patients from over- seas. Statistic bear out the angst among doctors and government officials in the Middle East and North Africa who fear healthcare expenditures at home will spiral out of control and force more Arabs overseas for medical care unless the alarming trend is addressed.
‍

Consider that Saudi Arabia — the second most-populous GCC nation and owner of one of the highest rates of genetic disease in the world — is predicted to grow from 28.4 million to 35.4 million by 2025. What’s more, obesity rates in the UAE are twice that of the world average, and almost 20 percent of the nation’s residents suffer from diabetes and are prone to heart attacks a decade earlier than their counterparts in the United States and Europe.
‍

In the meantime, despite government attempts to curb outbound travel for health services, patients from the UAE and across the Gulf region continue to seek treatments in Europe and the United States, where local governments are appropriating millions of dollars to reinvigorate existing facilities and construct venues to make medical tourism an even more appealing proposition.

Conferences, including the World Medical Tourism & Global Healthcare Congress, which played host to the Arab Health & Wellness Forum, in Orlando, Fla., have shaped agendas to in support.
‍

Hoteliers in Germany have also been happy to oblige this emerging Arab population now synonymous for habitual smoking and obesity by packaging stays with preventative care and lifestyle modification through local medical clinics and doctors. Rocco Forte claims up to 80 percent of its Middle Eastern guests in Germany are more than likely receiving medical treatment.

Some, most probably, through programs administered at each of three hotels, all connected to a local surgeon who has an expertise in diabetes, renal and coronary heart disease. Related affiliations are also common at Lans Medicum, a medical center in Hamburg that partners with the Fairmont Hotel Vier Jahereszeiten to examine guests for early stages of cancer, cardiovascular disease and metabolic illness.
‍

Health vices including a new-found appetite for fast-foot have pushed non-communicable chronic disease into the health consciousness of Gulf state Arabs. Now, when these Arab patients consider help for their complications in Germany, they can think about lodging that offers Arabic-speaking concierge services, copies of the Holy Qur’an in each room, restaurants that remain open for extended hours during Ramadan and chefs who prepare authentic culinary specialties and halal meals.

History recalls that high-end shopping and preserved landscapes have combined to make Germany a natural treat at any time of year. Nestled in the heart of Europe, Germany is easily accessible to most any visitor across the globe. But, the marriage between medicine and tourism has pushed Germany – 5.8 percent of the country’s population is Muslim — ahead of even France and Britain as the most-visited European destination among Arabs.

Middle Eastern guests spent 1.5 million nights in German hotels during 2013, and DZT, the nation’s tourism board, expects that figure to climb to 2 million by 2020. Compared to their European counterparts, these guests also tend to stay a bit longer – sometimes weeks at a time. UAE residents, alone, are said to spend up to $2 billion annually on medical tourism.
‍

The business of medicine is not lost on Germany, which spent approximately 314.9 billion euros on healthcare in 2013, an increase of 12.1 billion euros or 4 percent from 2012 and 11.3 percent of the gross domestic product. A focus on Arab patients is one approach to guarantee a steady stream of patients and a source of revenue for both the healthcare and travel sectors especially considering that revenues from medical tourism account for €1 billion annually.
‍

For its advocacy, the government launched “Health – Made in Germany,” a website that offers an overview of the German healthcare industry. The multi-lingual internet portal is, in part, designed to help foreign patients identify appropriate hospitals, technology and health-related services that can be used to prepare for a stay when in Germany.
‍

Complimentary regional approaches provide further affirmation. In Munich, where a stretch of Maximilianstrasse lures affluent shoppers and some 120,000 visitors each year from GCC nations, the city’s hotels pay homage to Arabic guests — 70 percent of whom are medical tourists.

Some patients need not leave the airport. Connections to Munich International allow for fast and comfortable outpatient procedures at either of two surgery rooms and 13 beds within the terminal. Here, patients can have tests or outpatient surgery and be on their way home in the same day.

Other German cities, such as Berlin which gives information in Arabic on the city’s official tourism website, are ambitiously striving to keep pace. Not to be outdone, North Rhine-Westphalia — a region which encompasses Dusseldorf, Cologne and Bonn — houses more than 25,000 beds across 90 clinics and ranks third among German states for attracting medical tourism Arab patients.
‍

A good number of these Arab travelers have ties to nearby Bad Godesberg, where Muslim immigrant families have moved into homes vacated when Germany shifted capitals, two decades ago, from Bonn to Berlin. That’s about the same time Sheik Abudulrahman al Mutaf began arriving in town.

On this visit, his stroll through Bad Godesberg is noticeably different. The storefronts at the local pharmacy, jewelry store, café and souvenir shop display their wares in Arabic. The good news he hears when he returns to the clinic once his wife’s treatment is completed is even easier for him to understand. Doctors tell the sheik that she is OK to return home.
‍

The MTA provides advisory services to investors interested in the industry and matches these financiers with medical tourism-related projects. www.MedicalTourismAssociation.com