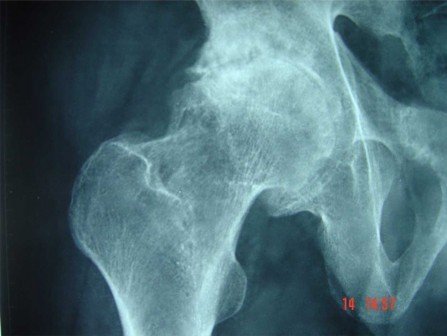 Arthritis is a condition where the cartilage at the joint surface of the bone wears away. It is this cartilage which normally makes the bone ends slippery and helps the joint to move smoothly without friction. This cartilage also functions as a shock absorber. Since this cartilage can not be regenerated, joints remain painful and at different stages of arthritis can cause a variety of problems like pain, swelling, inability to walk, deformity and so on.
‍

Arthritis is the world’s leading cause of disability. Of greater concern is arthritis of the hip joint in young and older patients. This could be due to a number of disorders such as:

• Avascular necrosis of femoral head;
‍
• Primary osteoarthritis of hip;
‍
• Childhood hip diseases (these cause arthritis in the third and fourth decades of life due to abnormal bio-mechanism);
‍
• Ankylosing spondylitis and Rheumatoid arthritis (these disorders are problems of the immune system of the human body and leads to arthritis in young age); or
‍
• Post traumatic arthritis (fracture involving hip joint leads to arthritis at a later date).
‍

These disorders are more debilitating than malignancy and cardiac diseases. Hip arthritis has major economic implications for younger patients as it can lead to loss of work. Hip resurfacing provides a solution. Surgery for Hip Joint replacement is indicated in patients who have advanced arthritis and all the conservative measures have failed to relieve pain. The concept of hip resurfacing as opposed to replacing the joint has been attractive to hip surgeons for a long time.

The first attempts at doing so were carried out many years before the advent of hip replacement surgery. In hip replacement systems, the whole of the femoral head (the ball of the upper end of the femur) has to be discarded and replaced with a polyethylene socket and a metal prosthesis with a small metal ball is inserted into the femoral canal. This hip implant is fixed to the bone with or without cement.

This less satisfactory survival rate of total hip replacement in young patients is due to loosening of the implant because of polyethylene debris generated between the plastic socket and the metal ball.
‍

The resurfacing, as the name suggests, enables the placement of a new surface onto the femoral head. Only a minimal amount of bone has to be removed from the femoral head, just the amount necessary to reshape the head to accept accurate seating of the new surface component. Thus the complete original ball of the hip is preserved and only the lining is changed. So the procedure is an attempt to replicate nature with only a little amount of bone needed to be removed to accomplish the resurfacing.

In true sense this operation allows a patient with hip arthritis to return to normal lifestyle. Another advantage with the resurfacing procedure is that the ball used in the system is similar to the natural ball and that in turn confers biomechanical advantages to the hip. The force of transmission is advantageous and the range of movement possible is greater than when a smaller ball is used.
‍

Hip resurfacing was first attempted in a big way in the early 1980s in the United States. Unfortunately, the failure rate was extremely high and the procedure was abandoned within a few years. The technique appeared to be good in theory, but it did not work in practice and there seem to have been a number of reasons for the failures. The most important cause of failure appears to have been the thin layer of UHMWP (the plastic liner) used in the system.

The surgeons in the 1980’s were not aware of the particular problems associated with the use of thin UHMWP components. We know now that these thin components are very prone to wear and breakdown. The particles produced during the wearing out process provoke a particular type of reaction from the bone around the hip joint not very dissimilar to the bone “dissolving.” When the bone weakens in this manner it can no longer support the artificial implant which then loosens.
‍

Interest in the concept of resurfacing was reawakened when surgical experience and advances in materials and metallurgy meant that it was possible to produce joint systems that did away with the intervening layer of UHMWP. These newer systems comprised simply of a metal ball articulating with a metal socket.

As the metal socket has considerably greater resistance to wear than the polyethylene, there is no difficulty using the thin metal shells in resurfacing systems. It is now clear that the original concept of resurfacing works with the newer materials using modern systems and the higher quality finish is obtainable nowadays for metal on metal couplings.
‍

There are many major advantages of hip resurfacing on conventional hip replacement. These include:

Hip resurfacing is the real solution for the young arthritic hip where survival rate and durability of hip joint is long and this can be called ideal hip surgery for young and highly active patients.
‍

We have the most modern and advanced state of the art Joint Replacement operation theatres at Dr. L. H. Hiranandani Hospital, Powai, Mumbai, where many hip resurfacing surgeries have been performed. We also have the latest computer navigation system to perform hip resurfacing. For long term results it is important to have precision and accuracy of component placement. It is also important to have proper three dimensional alignments of joint components and soft tissue balancing during surgery. This is all done with the help of computer navigation. It is important to consult your surgeon on the various alternatives for treatment of your chronic hip pain.
‍