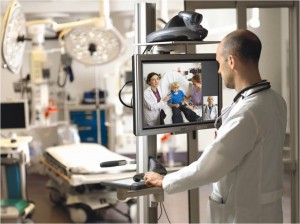 Hundreds of miles from the nearest VA hospital and 60 years removed from the Korean War that left him almost for dead, 82-year-old Howard Lincoln is about to see the doctor. He's not about to make the day's journey by snowmobile or dog sled. Instead, he will log onto a computer at a local clinic in White Mountain, Alaska, where the doctor, two planes rides away in Anchorage, will see him on the television monitor.
‍

Virtual consultations between distant physicians and remote patients are among the many reasons that medical tourism is embracing mobile health technologies.

Some of the promises of mHealth, technology's billion-dollar challenge to bridge the gap between healthcare providers and patients by making distances irrelevant and access unprecedented, will be showcased and discussed during the 7th World Medical Tourism & Global Healthcare Congress, Sept. 20-24, 2014, in Washington, D.C.
‍

Many of these applications are already here in the cellphones we hold in our hands or the tracking devices we wear on our sleeves. These technologies are not only improving health, but they are lowering costs.
‍

Ball-boys at the U.S. Open are fashioning attractive smart t-shirts from designer Ralph Lauren, who has introduced the latest in wearable technology to keep tabs on heart rates, stress levels and breathing.
‍

New devices to manage chronic disease or analyze and detect potential health threats seem to emerge on a daily basis. For proof, keep an eye on a ball-boy at the U.S. Open this week in New York City. Watch him reload Roger Federer or any other of the world's top tennis players with an arsenal from which to deliver a 100-mph serve. Watch his breathing gain heavy momentum. See his heart rate rise.
‍

He wears it well. Doesn't he?

It's a smart concept alright that looks good in a line of mobile technologies designed to get fitness-happy consumers involved in their own health. Doctors and health officials believe when patients are actively involved in measuring their health a concept known as patient engagement they are more likely to oversee and adopt a wider range of strategies that will prevent illness and keep them out of hospitals.
‍

Since the start of last year, more than $750 million in venture capital has been invested in companies that can do everything from transform a smartphone into a blood pressure gauge to photograph medical-quality images of the inner ear.

In Asia, famous for quirky gadgets and trend-setting technologies that often take years to find their way to the West, the mHealth
market is expected to hit $7 billion by 2017.
‍

Medical Silk Road, a joint venture of the Medical Tourism Association and the Borderless Healthcare Group, will introduce advances in health text messaging, mobile phone apps, remote monitoring and portable sensors among other innovations during a series of talks, networking and recommendation sessions with stakeholders from government, healthcare, media, telecommunications, and software development at the Gaylord National Resort and Convention Center.

Stephano said mobile health is an integral cog in the wheel that can increase the efficiency, productivity and attractiveness of medical tourism procedures internationally or domestically.

‍
Dialogue between a patient and physician is invaluable, said Stephano. Virtual conversations can bridge conventional gaps in medical tourism and give patients a feel for what to expect; building confidence and trust in their physicians before traveling overseas. This exchange of important medical information face-to-face can transcend procedures throughout the continuum of care and beyond.
‍

Mobile health devices, a market expected to hit 20.7 billion worldwide by 2018, are not immune to public appeal. Already, diabetics are monitoring their blood sugar levels by punching daily data into their mobile phones and doctors are sending texts via short message services (SMS) to expectant mothers.

Smartphones are reminding patients of what medications they need to take, how much and how often; knowledge that becomes
useful when combatting conditions like breast cancer, cardiovascular disease and depression that require multiple medicines and dosages.
‍

These applications in mHealth are notable, but innovation isn't stopping there. Earlier this year, a West African mobile carrier gave researchers access to information extracted from cellphones in Senegal, providing a window to track regional population movements and predict outbreaks of the deadly Ebola virus.

If these apps sound like smart ideas, they also make sense. After all, cell phones are more popular than toothbrushes. The World Health Organization estimates that more than 700 million people do not have access to clean drinking water, but according to the International Telecommunications Union, 96 percent of the globe is connected by cell phones. By 2020, 5 billion people in China will be connected to mobile devices.
‍

Stephano said doctors can follow these patients even in remote areas where access to care is an obstacle — and make diagnosis on chronic and non-communicable disease including diabetes, cancer and heart and respiratory conditions.
‍

Chronic disease accounted for two in three deaths worldwide — 34.5 million — between 1990 and 2010, according to the Global Burden of Disease Study, which estimates that for the first time, shortly after the year 2015, there will be more people above age 65 than below age five globally. For every year of added life expectancy beyond age 65, 10 months or less of that time will be spent with some degree of disability. That's not necessarily good news to Asians, who enjoy higher life expectancies than most
people in the world.

Chronic disease can steal from seniors the ability to handle daily activities, said Stephano. Doctors can use mobile technologies to monitor patients with Alzheimer's disease. This way, these patients with memory disorders can avoid acute care settings and remain in their homes with family and, in the end, improve not only their health, but the quality of their life.
‍

The possibilities seem endless and have been targeted enthusiastically; especially when access, affordability and quality are considered persistent obstacles for many patients around the world who are desperately in need of care. In one sense, mobile technologies are real-time medical tourism experiences in which to remedy these challenges.
‍

Some consumers are bound to wait for the day when a single and convenient mobile phone will capture their imagination and reverse the way they approach health. But, Stephano said the widespread adoption of mobile health technologies is inevitable. Acceptance will come sooner, rather than later.
‍

Most people don't embrace change so easily, and mobile health requires new behaviors, said Stephano. When both patients and doctors are convinced of the potential to reduce errors, control costs and improve health outcomes, then change will be here to stay.