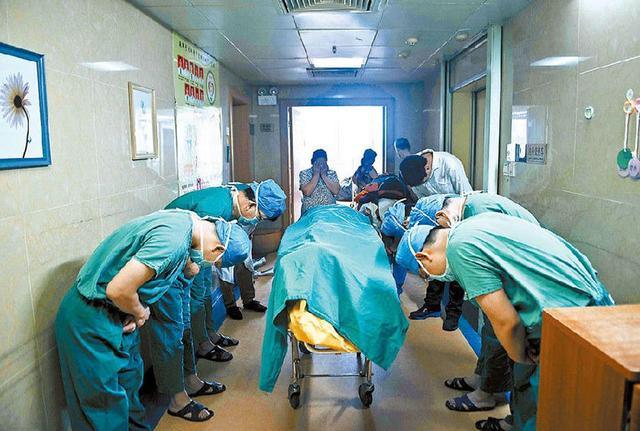 While his grieving mother wept in the background, doctors surrounded the 11-year-old, no longer able to help the Chinese fifth-grader who someday hoped to grow up to be one of them. Then they bowed in tribute — three times. A heartbeat later, Liang Yaoyi and the gurney he lay on was rushed into surgery so that doctors could use his last moments to save others.
‍

There are many people doing great things in the world, Liang, ravaged with terminal brain cancer, said from his sickbed. They are great, and I want to be a great kid, too.
‍

Liang died, but not before his final wish was granted: doctors at Zhongshan University Hospital, in China, removed his kidneys and liver so that the organs could be used to help other sick children desperately waiting for transplants.
‍

Voluntary organ donation is a relatively new concept in China, where, according to the Ministry of Health, some 1.5 million people continue to wait for transplants. Even though China performs more transplants than any other nation — outside of the United States — less than one percent of the population in need of the life-saving surgeries ever receives them.
‍

Though the government has repeatedly pledged to improve regulations that govern organ transplants and increase supply, many Chinese patients turn their attention overseas for help.
‍

Those Chinese who decide to travel abroad at least those that can afford to — are not only finding liver transplants in places like the United Kingdom, but other procedures as well from cancer treatment in the United States and cosmetic surgery in South Korea to placenta injections in Switzerland and high-end checkups in Japan. One Gallup poll reported about 15 percent one in seven Chinese had said that some member of their household had traveled to another country to seek treatment for a medical condition.
‍

As aggressive investments in China's healthcare system slowly begin to pay off in the form safe, effective, convenient and affordable care to all, foreign medical institutions are recognizing a huge market for an affluent class of Chinese who are willing to travel for more than just studying, shopping and sightseeing overseas.
‍

Because medical hospitals and clinics in China can't keep up with demand, wealthy and middle-class Chinese patients are opting for medical tourism procedures and treatments overseas, said Renée-Marie Stephano, president of the Medical Tourism Association,
fresh off staging World Medical Tourism Congress Taiwan 2014, in Taipei, earlier this year. As a result, medical facilities all over
the world are designing their international marketing strategies to offer services including interpreters and tailored menus and
websites geared specifically to attract Chinese patients.

From Liu Xiang, an Olympic gold medalist who withdrew from the 2012 London Games after an injury and entered Wellington Hospital Europe's largest private facility to Yao Ming, the former National Basketball Association standout who has made numerous trips following his retirement to Memorial Hermann Rehab and Physical Therapy in Houston for surgery, medical tourism has been far from an after-thought for China's rich and famous.
‍

These people have strong spending power and are particularly attentive to their health, so a lot of them go overseas for their health, Mou, an affluent 57-year-old Chinese patient who underwent procedures for colorectal cancer in the United States five years ago, told CaixinOnline. This is not just for serious illness, but also for chronic diseases, rehabilitation, therapy, nutrition and wellness, as well as other basic tests.
‍

According to the 2013 Hurun Wealth Report, the Chinese mainland accounts for more than one million millionaires and more than 60,000 whose assets are more than $16 million.
‍

Cai Qiang, chairman of Beijing-based Saint Lucia Consulting and member of the Medical Tourism Association, said his healthcare company has almost 1,000 clients, and more than 80 percent are affluent Chinese baby boomers in their 50s and 60s.
‍

The United States is — relatively speaking — more costly, but places, such as the United Kingdom, Germany and Singapore, are only about 10 to 30 percent higher than China,” said Cai, who estimates the majority of medical tourism patients leaving China are headed for cancer treatments and cardiac and neurological procedures. Some patients choose to go abroad for a medical examination, diagnosis and then they obtain a treatment plan before coming home for implementation in Chinese hospitals. This is the most economical and optimal choice.”
‍

Cai said Chinese patients with serious illnesses who cannot afford procedures in the United States, Germany and the United Kingdom travel closer to home to destinations, such as South Korea, India or Singapore.
‍

Between 2012 and 2013, the Mayo Clinic, which signed an exclusive agreement to receive Chinese patients through Saint Lucia Consulting, doubled the number of admissions from China for medical tourism procedures and treatments, and is expected to triple those numbers by the end of this year.
‍

Considering medical standards, facilities and treatments, the United States is the best choice, said Cai. Japan also offers good medical care, but the problem is that it's very hard to get a healthcare visa for that country.
‍

Some help is on the way. Hiroyuki Ishi, executive vice president of Emergency Assistance Japan and a speaker at the 7th World Medical Tourism & and Global Healthcare Congress, Sept. 20-24, 2014, said his company's medical tourism match-making connects Chinese patients to hospitals in Japan and provides for travel, immigration, and medical interpretation services as well.
‍

In the meantime, entrepreneurial organizations like the Aboo Health Management System in China are looking to stem the tide of Chinese nationals leaving the mainland for procedures and treatments overseas. The medical tourism company, a member of the Medical Tourism Association and a delegate to World Medical Tourism Congress, said the demand for overseas medical care has on the flip side — encouraged foreign investment in China toward the construction of hospitals and local clinics.
‍

Under an ambitious $124 billion plan, the Chinese central government had said it planned to build some 2,000 hospitals to ensure that each county would have at least one medical facility in compliance with national standards.
‍