How to Exponentially Increase Your Influence 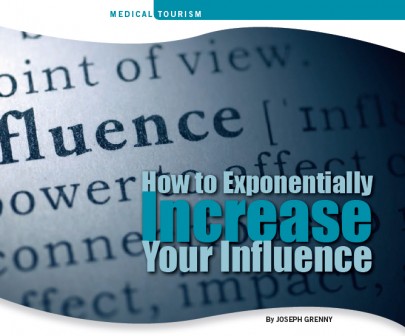 Leaders frequently make miscalculations in trying to influence change. Too often, they bet on a single source of influence rather than tap into a diverse arsenal of strategies. Our latest research shows that the main variable in success or failure is not which sources of influence leaders choose. By far, the more important factor is how many.

Influencers succeed where others fail because they know persistent problems are rarely fed by a single cause, but rather a conspiracy of causes. Instead of looking for the minimum it will take to accomplish change, influencers combine a critical mass of different kinds of influence strategies.
‍

To arrive at this conclusion, we studied nagging organizational problems, such as bureaucratic infighting, lack of collaboration, and low compliance with quality or safety standards. Although more than 90 percent of the executives we interviewed described their problems as powerfully “destructive,” even “cancerous,” few had done much to confront them.
‍

We got similar results when we surveyed executives and senior managers. About 40 percent of these executives had made some attempt to influence change. In doing so, however, the vast majority had employed only one influence strategy.

The evidence is clear. By using strategies within the six sources of influence in combination you exponentially increase your chances of success. But what are those sources and how do you actually target them?
‍

Our model organizes influence strategies into six sources. Motivation and ability make up the backbone of this model which is then subdivided by three domains: personal, social and structural.
‍

More than 90 percent of the executives we interviewed described their problems as powerfully “destructive,” few had done much to confront them.
‍

Using this model, here is how successful leaders employed strategies in each source to exponentially improve their chances of success:
‍

Source 1: Link to Mission and Values

True influencers understand that human beings are capable of fundamentally transforming their experience of almost any activity. To influence people to make changes, effective leaders establish a moral framework that helps people connect new behaviors to their deeply held values. If leaders fail to engage values, they’re forced to use less effective sources of motivation like carrots and sticks.
‍

True influencers understand that new behaviors can be far more intellectually, physically, or emotionally challenging than they appear on the surface. So they invest heavily in increasing personal ability. For example, Mike Miller, a former vice president of AT&T, saw that people needed more than motivation to speak up and save failing projects — they also needed the ability to voice their concerns.

By providing the right kind of training, Miller turned around his 3,000-person IT function and created a culture where everyone spoke up early and honestly about the risks they saw affecting project goals.
‍

Effective influencers understand that what shapes and sustains the behavioral norms of an organization are lots of small interactions. They realize that unless they positively aligned social actions, their chance of influencing change is slim.
‍

“Those who understand how to combine multiple sources of influence are up to 10 times more successful at producing substantial and sustainable change.”
‍

When Ralph Heath was tasked to get the F-22 Raptor into production in 18 months, he knew he needed the support of 5,000 Lockheed Martin employees. Unable to gain the trust and support of everyone, Heath invested time in the most influential people — both the formal leaders and the opinion leaders.

He met monthly with supervisors, managers, and informal leaders to candidly review their concerns and foreseeable problems. As Heath won the trust of opinion leaders, they influenced others. In the end, the performance of Heath’s group exceeded expectations and met production deadlines.
‍

If you focus only on the motivating power of the people around you, you limit your own influence. The reality is that people around you don’t just motivate — they can undermine behavior as well.
‍

At AT&T, Mike Miller was charged with improving his group’s track record in meeting quality, schedule, and cost targets. He found that the ability to discuss mission-critical issues rapidly and honestly with co-workers was essential for employees. Unfortunately, leaders didn’t always enable this behavior.

So to make leaders accessible and available, Miller taught them new skills and tasked them with teaching the skills to their direct reports. The process cascaded down through the organization and the skills became ingrained in the culture.
‍

If you want to understand people’s priorities, follow the money. If a leader talks about quality, but rewards productivity, employees will notice. Chronic problems, such as lack of accountability, poor productivity, and slipshod quality, can often be traced to poorly designed incentives that reward the wrong behaviors.
‍

Employees at all levels need to see incentives for changing. People won’t support change if the behavior management to encourage doesn’t make their lives better. However, our advice is to use incentives third, not first. Otherwise, you might actually undermine people’s intrinsic motivation.2 Begin with personal and social sources of motivation, and then reinforce them with well-designed incentive systems.
‍

If you want to change an organization’s mental agenda, you need to change the data that routinely crosses people’s desks. Pat Ryan, vice chairman of OGE Energy, was concerned about a subsidiary’s reputation for being insufficiently customer driven.

To turn things around, Ryan established a companywide target of having streetlights repaired within five days and created a weekly reporting mechanism to help managers monitor outages. Shortly, all but two areas had completely solved the problem.
‍

Sometimes companies need to make structural changes to influence behavior. Spectrum Health Grand Rapids recently went so far as to create a physical space where people can brainstorm ideas without distractions. In the first year, company employees identified 35 ideas to pursue commercially and received provisional patents on three of them.
‍

I invite you to learn more about how to increase your influence at my presentation at the World Medical Tourism and Global Healthcare Conference, Monday, Nov. 4, 3:10 p.m., at Caesars Palace, in Las Vegas, Nevada.
‍

Joseph Grenny is a four-time New York Times best-selling author and co-author of “Influencer,” a dynamic keynote speaker and a leading social scientist for business performance. With 30 years of experience, Grenny has delivered engaging keynotes at major conferences including the HSM World Business Forum at Radio City Music Hall.

Cofounder of corporate training and leadership development innovator VitalSmarts, Grenny’s work has been translated into 28 languages, is available in 36 countries, and has generated results for 300 of the Fortune 500. For related information from Grenny and his coauthors, visit the Crucial Skills blog www.crucialskills.com.