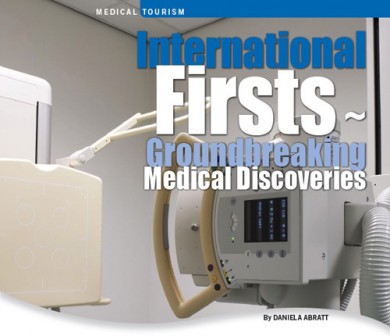 Are you afraid to go to the doctor? If you’re scared today, imagine seeing a physician 300 years ago. Now the drill guns and needles don’t seem as frightening, right? The progression of technology and medical discoveries is astounding. When we see a stethoscope or have an eye exam, we tend to forget they took years to develop, as did everything else in the health field. So where were these scientific breakthroughs made?

Doctors, physicists, scientists and engineers across the globe have brought fame to their countries for their contributions to the medical field, whether discovering the vaccine for a disease, creating lifesaving equipment or performing a first-of-its-kind surgery. Let’s explore the achievements in various regions of the world.

The land “down under” is most commonly known for kangaroos, the outback and the Great Barrier Reef. But this home of beach-loving beauties and koala bears is also the site of numerous medical discoveries and inventions. Australia made the history books in 1926 when Dr. Mark Lidwell created the first electronic pacemaker, which was then used to revive a stillborn infant at the Crown Street Women’s Hospital in Sydney.

The cochlear implant was also developed in Australia. Led by Professor Graeme Clark, a team from the University of Melbourne invented the device, and the first person received the implant in 1978 at the Royal Victorian Eye and Ear Hospital. The “bionic ear” reestablishes a sense of sound to the profoundly deaf or severely hard of hearing.

Think back to your teen years. Did you have braces? Well you can blame your discomfort and straight teeth on Percy Begg, the Adelaide native who, in the 1940s and 1950s, modernized an expensive and painful orthodontic system into the one we use today.

Australia is also known for its microsurgery thanks to the work of surgeon Earl Owens. A graduate of the University of Sydney, Owens pioneered the use of microsurgery, surgery performed under powerful microscopes which enables the surgeon to rejoin the finest capillaries, facilitating the reattachment of amputated limbs and the reversal of vasectomies, among other functions. In 1968, Owens used microsurgery to reattach a finger of a two-year-old child in Sydney, the first operation of its kind in the world.

In the 1990s, researchers from the University of Queensland led by Professor Ian Frazer developed the world’s first vaccine to prevent cervical cancer. The vaccine attacks the human papillomavirus known to cause cervical, vaginal and vulvar cancers. It was approved for use in the United States in 2006 and released to the market under the name Gardasil.

Europe was the birthplace of a myriad of medical innovations.

One of Germany’s earlier medical advances occurred in 1890 when Emil von Behring discovered the vaccine for diphtheria, an acute infectious disease which affects the respiratory tract and subsequently other organs as the bacteria spreads through the bloodstream. Because of the widespread distribution and use of the vaccine, diphtheria is now a rare occurrence throughout the world. As of 2010, there were fewer than five cases a year in the United States.

Just five years after the vaccine was created, Wilhelm Konrad von Roentgen developed the X-ray. The physicist described this new type of radiation as one that enabled the imaging of objects hidden by dense materials. After taking images of his own skeleton, he called it “X-radiation” because so little was known about it at that time.

Germany is also the site of perhaps one of the most profound and fascinating medical progressions in modern times. In 2010, Timothy Ray Brown, an American-born Berlin citizen living with HIV and leukemia, was diagnosed as HIV-free. His treatment began in Berlin in 2007 when he received a transplant of HIV-resistant stem cells in treatment of his acute myeloid leukemia. Dr. Gero Huetter, of the University Medicine Berlin, thought this treatment would best tackle both the HIV and the cancer. He and his team suspected that the HIV stored in his cells might begin to replicate after his immune system recovered from the stem cell transplantation, but this was not the case.

Prior to the transplantation, the “Berlin Patient,” as Brown became known, underwent intensive chemotherapy and radiation to kill all his immune defense cells. The day of the transplant, he stopped taking his antiretroviral drugs. About 13 months after the surgery, his cancer relapsed, and he began a second round of chemotherapy followed by another transplant of HIV-resistant stem cells. This led to complete remission of his cancer. About three and a half years after the initial transplantation, Brown’s blood cells and plasma showed no evidence of HIV.

Another country with a variety of medical claims to fame is France. In 1816, René Laennec invented perhaps one of most recognizable and widely known pieces of medical equipment: the stethoscope. The subsequent decades followed with the discoveries of a number of vaccines. Louis Pasteur developed two vaccines, the first in 1881 for anthrax and the second in 1882 for rabies. In 1896, André Chantemesse developed one for typhoid fever, and in 1927, bacteriologist Albert Calmette and veterinarian Charles Guerin developed one for tuberculosis.

France also paved the way for a series of nontraditional transplants, performing the world’s first successful hand transplant on Sept. 23, 1998. Clint Hallam, of Perth, Australia, received a new right hand a few years after his was amputated in a sawing accident in a New Zealand prison where he was being held on a fraud conviction. Dr. Jean-Michel Dubernard led a team of international physicians in the 13-hour surgery in Lyon. The operation was successful, but Hallam did not properly follow his post-operative immunosuppressive and physical therapy regimen, leading to the eventual rejection and amputation of the hand in 2001.

In 2000, Dubernard made history again when he led a 50-member surgical team in the world’s first double-hand transplant in Lyon. After a 17-hour procedure, Denis Chatelier received two new hands after his were blown off by the premature explosion of a homemade model rocket.

The world’s first arm and hand transplant occurred in Malaysia on May 18, 2000 on a one-month-old girl. Chong Lih Ying was born with a severely deformed left arm and received the limb from her identical twin sister who died at birth.

French surgeons at Amiens Hospital performed yet another groundbreaking surgery in 2005. Dr. Bernard Devauchelle headed the surgical team, which included Dubernard, in a 15-hour procedure to give Isabelle Dinoire a new face. After waiting six months for a donor, the doctors performed the world’s first partial face transplant using facial tissue from a brain-dead woman to give Dinoire a new mouth, nose and chin. Her face initially became disfigured after she had overdosed on sleeping pills (in a possible suicide attempt) and was then mauled by her labrador, Tania. She said her dog had never bitten anyone before and believes she was just trying to wake her up.

Five years later in neighboring Spain, the first full face transplant occurred. The surgery, which was the culmination of two years of planning, took 24 hours and 30 doctors at the Vall d’Hebron University Hospital in Catalonia on March 20, 2010. The patient was identified only as Oscar, a Spanish farmer who was involved in an accident in 2005. Though other facial transplants had occurred prior to this surgery, this is the first to involve the entire face, including the nose, lips, jaw, teeth, muscle tissue, skin and cheek bones.

Facial transplants are highly controversial, as they have many psychological risks, much more so than regular organ transplants. Patients have to undergo a number of psychological evaluations, and surgeries must be approved by an ethics committee. But each type of surgery, regardless of its difficulty, was a huge achievement at the time of its development.

In 1940, Dr. Austin T. Moore performed the first metallic hip replacement at The Johns Hopkins Hospital in Baltimore, United States. This method was improved upon in 1960 in Manadalay, Burma where Dr. San Baw created ivory hip prostheses. Two years later, British surgeon John Charnley performed the first low-frictional torque arthroplasty using an artificial hip made of plastic and metal with a ball-and-socket joint. Charnley is regarded as the founder of modern hip replacements because of the revolutionary design of the actual replacement, surgical technique by which to implant it, ways to better prevent infections and optimize the flow of surgery, and methods of teaching this procedure.

Two pioneering organ transplants occurred in the U.S. The first kidney transplant was performed by Joseph E. Murray in 1954 at the Peter Bent Brigham Hospital in Boston and the first lung transplant by James D. Hardy in 1963 at the University of Mississippi Medical Center in Jackson.

The U.S. is also home to the first artificial heart, completed in 1957 in a dog at Cleveland Clinic. The first artificial heart to be implanted in a human took place in 1969 at the Texas Heart Institute. Denton Cooley performed the surgery using a pneumatically-driven, Dacron-lined plastic heart designed by  Argentinean-born Domingo Liotta. However, this heart was intended to sustain cardiac patients temporarily until they could receive a transplant. Only in 1982 was a permanent artificial heart created at the University of Utah. Robert Jarvik invented the device made of plastic and titanium and powered by compressed air. This surgery was performed five times, but each patient eventually died, the longest surviving 620 days after surgery. An artificial, electrically-powered heart is currently under development. If a successful one is created, it will reduce the need for heart transplants.

South African professor Christiaan Barnard performed the world’s first heart transplant in 1967 at the Groote Schuur Hospital in Cape Town. The patient, Louis Washkansky, suffered from gross heart failure and received the heart from a young woman who had been severely brain-damaged after a car accident.
After years of work, English biologist Robert Edwards and physician Patrick Steptoe developed the process of in vitro fertilization, leading to the birth of the first test-tube baby, Louise Brown, on July 25, 1978 in Oldham. Since then, about four million children have been born via IVF worldwide.

The world’s first separation of adult Siamese twins occurred at Raffles Hospital in Singapore on July 6, 2003. The Iranian sisters were born conjoined at their heads. Their brains were separated after a 52-hour surgery involving a team of 30 Singaporean and international specialists from the U.S., Japan, France and Switzerland. However, due to massive blood loss and poor circulation, they both died a few hours after surgery.

Scientists at the University of Calgary and the Calgary Health Region in Canada developed the world’s first MRI-compatible surgical robot in 2007. The NeuroArm is operated by a surgeon from a computer and operates in conjunction with a real-time imaging to give surgeons control at the microscopic level. The idea revolutionized neurosurgery.

The health profession has progressed tremendously over the last century. Doctors and scientists have found ways to ease our pain and accelerate diagnoses, so we can take comfort in the sight of X-rays and lasers rather than tremble at the overwhelming intricacy of the machinery. As technology becomes more even more specialized, one can only imagine the many new “firsts” the world will see in years to come.

Daniela Abratt is a Communications Intern with a focus on Journalism for the Medical Tourism Association. She is currently pur¬suing a Bachelor of Science in Journalism with a minor in International Develop¬ment and Humanitarian Assistance at the University of Florida, where she is also a member of the Golden Key International Honour Society. Daniela writes for MTA’s Medical Tourism Magazine and Health Tourism Magazine