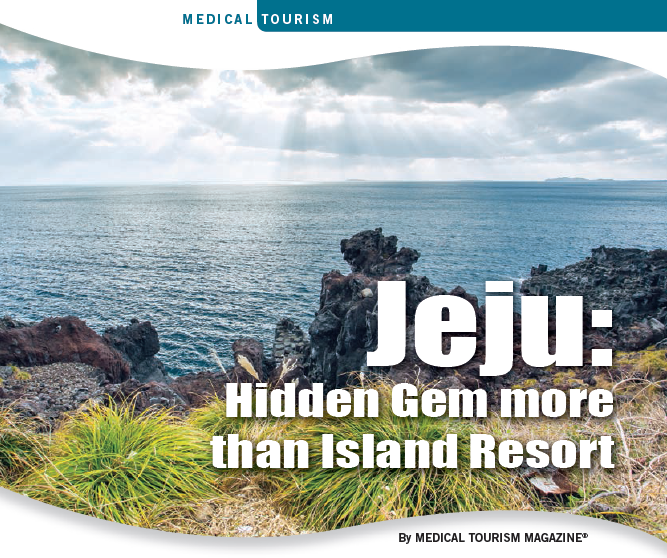 Busloads of shoppers still stretch to catch a glimpse of passing luxury boutiques that line the Shilla duty-free shop, but these days price-savvy Muslim tourists are no longer taken aback to see prayer mats in some local restaurants and “halal” on the menus.

Weary of trips to Hong Kong or Southeast Asia destinations, Muslim visitors are a welcomed piece of a much larger effort to increase medical tourism to Jeju, a South Korea island destination just a short one-hour flight from Seoul and not much longer from Beijing, Malaysia or Tokyo.
‍

Medical treatment and research to slow the natural processes of aging are at the forefront of the JDC mission and the impetus behind a strategy to attract patients from across the globe to South Korea’s largest island. Some 18 cities with populations of more than 5 million are within a 2-hour flight of Jeju Island, creating a perfect vantage point to entice patients who want to combine medical treatment with an enviable vacation in a clean and unspoiled environment.
‍

A recipient of the 2013 Patient Referral Leadership Award at the 7th World Medical Tourism & Global Healthcare Congress, in Las Vegas, Alshuaibi said until the Gulf Cooperation Council — Bahrain, Kuwait, Oman, Qatar, Saudi Arabia, and United Arab Emirates — stabilizes its own position as a medical tourism hub and puts local citizens at ease with access to healthcare at home, patients from those nations and the Middle East as well are more than happy to find personalized services in Korea that cater to Muslim preferences.
‍

The Middle East, with an annual growth rate of 5.8 percent, is the fastest growing outbound tourism market in in the world. Personalized services for Muslim patients including the implementation of culture-specific guidelines related to clinical care, food and translation services, religious observances, and apartment-style accommodations have helped increase Middle East travel for medical tourism opportunities by 19.3 percent and 20.1 percent for GCC arrivals.
‍

Muslim-friendly dining and entertainment options aside, the Korean government has invested US$99 million in JDC, the remainder to be provided by private investors. JDC, presented the 2013 Innovation in Medical Tourism Award at the 7th World Medical Tourism & Global Healthcare Congress, will feature at its core Healthcare Town, considered to be the first medical complex in Korea to provide a variety of healthcare services including check-up clinics, rehabilitation centers, research and development and resort facilities at one site.
‍

The healthcare center, scheduled for completion in 2015, is under construction on a 1.54 million-square-meter site, 34 percent of which will be preserved as green areas. Specialized services for medical tourism patients and visitors will be accommodated at three parks: the Wellness Park, the Medical Park, and the R&D Park. The idea is to attract not only Korean patients, but those from around the world as well.
‍

“We plan to attract medical tourists from abroad,” Byon Jong-il, chairman and CEO of JDC, told the Korea Times. “We don’t have a specific target, but we expect there will be many Chinese tourists in the coming decade or two. So, in the short term, we will focus on attracting Asian medical tourists.”
‍

The Korea Health Industry Development Institute reported that 159,464 patients from 188 countries visited Korea in 2012. Chinese patients topped the list, with some 32,503 spending more than US$2.5 million.
‍

JDC plans to connect local hospitals with foreign ones for active exchanges of medical services and expertise. In addition to China, the local government plans to eventually hold briefing sessions that target foreign patients in Russia, Uzbekistan and Kazakhstan to cement a foundation in medical tourism investment.
‍

“Jeju offers the unique combination of Oriental medicine and natural resources to health-conscious travelers,” said Stephano. “Some of these approaches may fall under alternative medicine – like acupuncture or herbal treatments – that, for the most part, conventional medical practitioners may disregard or refuse to acknowledge entirely.”
‍

The island, Korea’s most visited, has always been a popular destination for travelers in search of natural beauty and serenity. In 2010, the island was included in the Global Geoparks Network (GGN), a UNESCO-assisted project aimed at the promotion and preservation of geological heritage.
‍