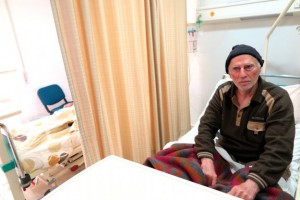 The 62-year-old repairman from Mosul who barely escaped the horrors of ISIS last year — one of tens of thousands of refugees who are crowding into Jordan seeking sanctuary sits on the edge of a bed in Italian Hospital in Amman, where he is being treated for heart ailments and stress.
‍

To his treatment team, which includes nuns from a French-order who have been running this hospital in the capital city for more than a decade, Agnan Adnidihad poses another test in a series of unique challenges to deliver medical services to the scores of patients many like him — who travel to the Kingdom from other countries each year.
‍

Jordan enjoys the facilities, human resources and stability to continue to provide quality care even in the face of an aging population, chronic illness, emerging new disease and political instability in other countries, said Renée-Marie Stephano, President of the Medical Tourism Association, who recently returned from Jordan, where she discussed strategies with representatives from the Arab nation. But, access to quality care is contingent on more than professional staff and equipment. We know that in order to wield these resources effectively, a commitment must be made to acquire the proven protocols that can make or break a positive patient experience.
‍

Tourism revenue makes up 13 percent of Jordan's $34 billion economy, according to Nayef al-Fayez, minister of tourism and antiquities. But, even though Jordan is considered a beacon of stability in a region polarized by political strife, tourism numbers are down by more than half compared to those of four years ago. Still, about 2.8 million travelers visited Jordan in 2014, 200,000 of whom were medical tourism patients seeking treatment, according to the World Health Organization.
‍

Private Hospitals Association President Fawzi Hammouri said each of those patients traveled with at least two companions, boosting the total number of medical tourists to some half-million and more than JD1 billion in revenue related to health procedures, accommodations, transportation and related expenses to the economy.
‍

In Jordan, travelers are met with Ahlan wa Sahlan hello and welcome from the 6.5 residents who grace the countryside from Amman to the Wadi Rum. But, extending open-arms alone won't acquiesce with foreign demands in the health travel industry. Several challenges confront the Kingdom's medical tourism industry among them an increase in operating costs due to a hike in electricity tariffs, which have doubled the past four years, from 113 fils per kilowatt hour in 2011 to the current 272 fils per kilowatt hour.

Another concern stems from travel restrictions for certain foreigners, said Hammouri, who noted that patients from Iraq and its semi-autonomous Kurdistan region have changed their medical destination to countries other than Jordan due to visa requirements. However, Hammouri said obstacles will not prevent the medical tourism industry from intensifying efforts to promote Jordan as a destination.
‍

Hosting advanced training and certification for healthcare professionals is one indication that Jordan is bullish on the prospects of medical tourism. And, the monarchy is doing its part to stress the important role that the tourism sector contributes to Jordan's economy and job creation.
‍

Even His Majesty King Abdullah, at a meeting with tourism representatives and investors last month in Amman, emphasized the need to promote best practices and increase the number of qualified professionals in medical tourism in order to enhance regional competitiveness and attract more visitors. In a related outreach effort during a nursing conference later that month, Her Royal Highness Princess Muna Al Hussein underscored the need to qualitatively transform the level of care delivered to all patients
including the Syrian refugees who have placed a serious challenge to Jordan's healthcare infrastructure.
‍

As health systems deteriorate in surrounding countries and war-injured patients with complicated wounds continue to flock to
Amman, Rashed Alblooshi, a middle-aged businessman from Abu Dhabi who has traveled to Munich the past seven years for
orthopedic care and high-end shopping, offers a sharp contrast in medical travel in the region. One that Jordanian officials believe
medical tourism training can help to reverse.