Just Doing It: Jordan Making Name for Itself in Medical Tourism 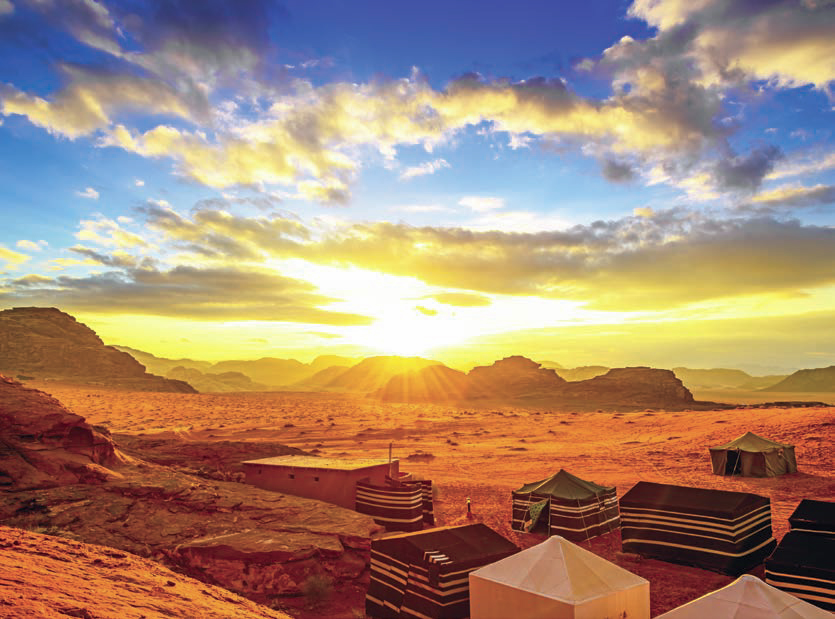 The name evokes Biblical history and, at the same time, the world’s most famous basketball player. It’s not hard to find Jordan these days, either splashed across a newspaper headline geographically linked to the Middle East peace process or popping through a television commercial pitching Nike sportswear.

Jordan means a lot of things to different people, but an ever-increasing number of world travelers and healthcare aficionados are beginning to define the Arab kingdom in Western Asia as a popular destination for medical tourism. Consider: in its most recent accounts, the World Bank ranked Jordan among the top five destinations in the world for medical tourism and first in the region.
‍

Visible for its majestic desert scenery and ancient monuments that hold great importance to pilgrims, archeological buffs and tourists worldwide, the Hashemite Kingdom of Jordan – as it is officially known – resonates with healthcare consumers for time-tested hospitality, affordable treatments and first-rate care and, perhaps, above all secure passage to and from a region synonymous with political unrest.
‍

Jordan is bullish on the prospects of its medical tourism industry. And, the government has acted accordingly by investing financially to improve facilities and to train and retain healthcare professionals. The dividends are considered profound.
‍

Even Princess Basma, remarking at a recent international gathering organized by the Internist Association of Jordan and the Royal College of Surgeons in Edinburgh, United Kingdom, noted that in the late 1920s, Jordan was home to only three physicians compared with the more than 25,000 doctors currently registered in the Jordan Medical Association, most of whom are board certified in the United States, United Kingdom, and Germany.
‍

Furthermore, the ratio of physicians to the Jordanian population – 26 per 10,000 — is comparable with numbers in the United Kingdom, which boasts 2.7 doctors per 1,000 residents. Although the two nations attract similar revenue from medical tourism, treatments in Jordan not only cost substantially less than those in the United Kingdom, but also rate highly in patient satisfaction scores.
‍

Jordan’s Private Hospital Association reported that 210,000 patients from 48 countries travel to receive treatment in the kingdom. The Al Khalidi Medical Centre says that 40 percent of the patients treated at the hospital are foreign, a good number from the United States. Patients, many from Libya, Iraq, Palestine, Sudan and Yemen, are known to seek advanced cardiovascular and cancer treatments, kidney transplants and in vitro fertilization among others.
‍

Medical tourism contributes approximately $1bn in revenue or 4 percent to Jordan’s Gross Domestic Product. Because of a wealth of famed tourism attractions, patients are likely to bring along a companion and both wind up staying a minimum 10 days, which bodes well both for local trade and labor markets.
‍

Jordan has 63 private hospitals and two university centers that specialize in research and training. Support staff includes 32 nurses per 10,000 Jordanians, a figure on par with Thailand, considered an international leader. And, the number of pharmacists in the kingdom – 14 per 10,000 Jordanians – is comparable to that of Japan.
‍

An affordable cost structure, quality care – nine hospitals have achieved Joint Commission International accreditation – and customer service provide for a foundation to build Jordan’s reputation as a destination of choice for medical care in the Middle East.

Not content to rest on local laurels, health and tourism officials have their sights set beyond dessert sunsets and are looking instead to attract international patient markets in the United States, Canada and United Kingdom that would ensure sustained growth.
‍

Getting Down to Business

In Jordan, travelers are met with “Ahlan wa Sahlan” – “hello and welcome” – from the 6.5 residents who grace the countryside from Amman to the Wadi Rum. But, the monarchy recognizes that extending open-arms alone won’t acquiesce with foreign demands in the health travel industry and is taking measures to develop the private care sector.
‍

The country had a coming out celebration of sorts at the 2012 International Medical Tourism, Wellness and Spa Congress, sponsored by the Private Hospitals Association in collaboration with the Medical Tourism Association®. Some 300 delegates and exhibitors from 25 countries converged on Jordan, where buyers of healthcare were introduced to the Jordan Health and Wellness Destination Guide, which continues to drive populations of all ages to an array of natural therapeutic sites including the Dead Sea and the Ma’in Hot Springs.
‍

Government investment in infrastructure has led to new roads to the Dead Sea and luxury five-star lodging accommodations like the Movenpick Hotel and Resort, the Jordan Valley Marriott, and the Kempenski Ishtar Hotel.
‍

At 410m below sea level, the Dead Sea is the lowest place on earth. The Dead Sea coast boasts spectacular natural and spiritual landscapes and – of course – the salty water itself, which contains 21 minerals including high levels of magnesium, sodium, potassium and bromine.

Of note to a growing population aged 65 and older, a combination of Dead Sea water and thick black mud found along the shoreline are known to increase blood circulation, and provide healing and comforting remedies for arthritis, allergies and skincare.
‍

The Dead Sea Development Zone is also the cornerstone to ongoing tourism projects totaling JOD1bn. Prime Minister Abdullah Ensour said one of the projects underway includes construction of a hotel and tourism resort on the north eastern shores of the Dead Sea.
‍

Gulf Cooperation Council nations, of which Jordan has been invited to join at a date yet to be determined, are positioning themselves for a surge in population, income levels and healthcare consumption that is projected to grow 12 percent annually to US$ 69.4 billion by 2018.
‍

When and if Jordan acts on the official invitation, accession into the oil-rich economic bloc could thwart unemployment rates, spur foreign trade and provide much-needed monetary support to stem a tide of refugees into the kingdom from wartorn Syria.
‍

Jordan Hospital in Amman, the Al Khalidi Medical Centre and the Farad Hospital regularly treat American and European patients. The number of those travelers seeking medical treatment is likely to grow parallel to expected increases in the cost for procedures and treatments in the United States and throughout the European Union.

Medical tourism presents a huge opportunity for countries like Jordan that can offer patients and private healthcare companies not only medical expertise and low costs, but a secure environment for treatment as well.
‍

As the kingdom exploits social media to modernize democratic processes and reinforce healthcare systems, Jordan remains a country rich in history. Considered among the world’s oldest continuously inhabited lands, Jordan has been memorialized in pop culture blockbuster films like “Indiana Jones and the Last Crusade,” yet is able to maintain an unassuming, low-key profile while quietly earning a reputation as a model for change in a region where turmoil is too often status quo.

To King Abdullah’s credit, Jordan stands out in a troubled region, a Holy Land sandwiched between some of the world’s most renowned hotspots – Iraq, Syria, and even Egypt. But in the minds of European and American travelers who would like nothing more than to add a trip to the baptismal site of Jesus onto their bucket lists, perceptions about Jordan often confound realities.
‍

But, fact is that Jordan is a safe oasis in the desert, and the government is making sure apprehensive North American and European tourism markets know it. Medical tourism interests should be encouraged by a series of grants through the USAID Economic Growth through Sustainable Tourism Project to the Jordan Tourism Board designed to get the word out through social media to new groups of tourists contemplating a trip to the Middle East.
‍

Social media is anything, but foreign to Jordan. After all, Queen Rania herself was the first among Middle Eastern leaders to understand and embrace the value of social media, creating an instantaneous and direct link with her audience through her YouTube and Twitter accounts. And her husband, King Abdullah, managed social media networks to generate support for peaceful political reform that marginalized opposition from the Muslim Brotherhood.
‍

As the kingdom exploits social media to modernize democratic processes and reinforce healthcare systems, Jordan remains a country rich in history. Considered among the world’s oldest continuously inhabited lands, Jordan has been memorialized in pop culture blockbuster films like “Indian Jones and the Last Crusade,” yet is able to maintain an unassuming, low-key profile while quietly earning a reputation as a model for change in a region where turmoil is too often status quo.
‍

Competition for international healthcare dollars is just heating up in the Middle East and North Africa in countries like Abu Dhabi, Dubai and even Israel. To its advantage, Jordan remains a hot destination, and does not have to be a tough sell for Western patients seeking medical tourism opportunities.
‍

Royalty, celebrities and, most recently, U.S. President Barack Obama have discovered Jordan while marveling at its beautifully preserved tourism infrastructure – from the spectacular Roman ruins of Jerash to the ancient Nabataean buildings of Petra that are dramatized by red sandstone structures carved into cliffs.
‍

Like this “Lost City of Stone,” medical tourism in Jordan has some secrets to reveal. Private concerns, which can play an important role in not only providing healthcare, but by easing the financial burden on government spending used to enhance medical facilities, import technologies and educate and train professionals, would be wise to lend an ear.
‍

More than a few travelers would like nothing more than to add a trip to the Jordan River — believed to be the baptismal site of Jesus — onto their bucket lists.

Renée-Marie Stephano is the President and Co-founder of the Medical Tourism Association® and editor-in-chief of Medical Tourism Magazine® and the Health and Wellness Destination Guide series of books. Ms. Stephano has authored several books from “Developing International Patient Centers, Best Practices in Facilitation,” to “Medical Tourism for Insurers and Employers,” and the most recent, “Engaging Wellness.”
‍

Ms. Stephano is a former attorney and specializes in working with governments and hospitals to develop sustainable medical tourism/international patient programs and strategies including the development of healthcare clusters, and international patient departments on long-term plans. Ms. Stephano works with ministers of health, tourism and economic development in developing public-private partnerships to support medical tourism and, at the same time, to provide a benefit and return to the local community. She organizes one of the only summits that brings together ministers of health, tourism and economic development every year.
‍

She has helped assess the feasibility and opportunities of international programs for both the United States and international hospitals, cities and countries to foster international expansion, clinical development and affiliations and partnerships. She also consults governments in the development of sustainable medical tourism zones and free healthcare zones.
‍

Ms. Stephano is a keynote speaker at international conferences and has spoken at hundreds of events and has been featured and mentioned in media publications around the world.
‍