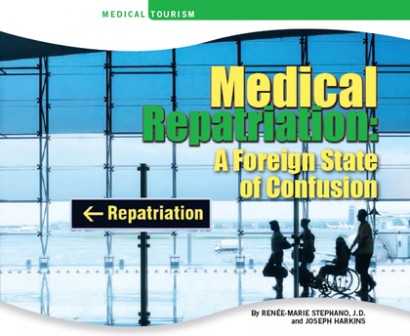 Talk about having a bad day. Wladyslaw “Walter” Haniszewski suffered a crippling stroke and lay unconscious in a hospital bed in New Jersey, where the uninsured and undocumented immigrant had lived for the past 27 years. When he woke a month later, still barely able to communicate, the Polish native found himself in a state of confusion — back in his homeland without ever giving his consent.

The sudden discharge infuriated friends and the Polish consulate general and brought into question just how much the former construction worker knew about what was happening to him.
‍

Paralyzed through half his body and estranged from his family, Haniszewski was eventually hospitalized in the Polish town of Boleslawiec, according to the consulate, yet another unintended consequence of medical repatriation.
‍

Private and public hospitals across the United States have engaged in the practice of returning immigrant patients – usually those undocumented – to their country of origin when medical needs become overwhelmingly expensive and reimbursement is unavailable.
‍

Some legal experts say that forced or coerced medical repatriation, without the role of U.S. Immigration and Customs Enforcement, circumvents the federal government and violates national and international law. Healthcare officials, like the Robert Wood Johnson University Hospital which treated Haniszewski in Perth Amboy for 51 days, cite the financial strain that uninsured illegal aliens put on medical facilities.
‍

Adding to the high cost of advanced care, Robert Wood Johnson picked up the tab to transport the Polish immigrant through an Air Escort Medical Flight rather than face the prospect of expensive long-term rehabilitation.
‍

Critics contend that hospitals should be in the business of providing care and not deporting patients. Just how many patients are sent backing is hard to quantify, advocates say, because patients are transferred in the shadows of the public eye.

Since 2006, hospitals in the United States have sent or tried to deport more than 800 immigrants back home, according to an analysis by the Center for Social Justice at Seton Hall University School of Law and the Health Justice Program at New York Lawyers for the Public Interest.
‍

Critics contend that hospitals should be in the business of providing care and not deporting patients. Just how many patients are sent backing is hard to quantify, advocates say, because patients are transferred in the shadows of the public eye.
‍

Medical repatriation may sometime seem without boundaries, for even those with jobs and health insurance. Days after they were badly hurt in a car accident, Jacinto Cruz and Jose Rodriguez-Saldana lay unconscious in an Iowa hospital while healthcare officials weighed what to do with the Mexican immigrants, who had no legal permission to live in the United States.
‍

Both men had health benefits through their employer, one of the nation’s largest pork producers. Even so, hospital officials were unclear whether their insurance would compensate the Iowa Methodist Medical Center for the long-term rehabilitation they needed.
‍

After consulting with the patients’ families, the hospital boarded the two comatose patients onto a private plane en route back to Mexico. Before long, without consulting a court or federal agency, the men woke in a hospital in Veracruz, 1,800 miles away on the Gulf of Mexico.
‍

Hospitals are legally mandated to care for all patients who need emergency treatment, regardless of citizenship status or ability to pay. Once the patient is stabilized, funding ceases as well as the requirement to provide care.
‍

More often than not, patients are sent home, without the benefit of advocacy to speak on their behalf. Some patients deported subsequently die in hospitals that are ill-equipped to meet their faltering needs. Others suffer lingering medical problems without receiving adequate care.
‍

Insurance paid more than $100,000 to treat both Cruz and Rodriquez-Saldana after they were hit by a semitrailer truck. Before they were returned to Mexico, two rehabilitation centers in the United States refused to take the undocumented men when concerns arose about the duration of their insurance coverage.
‍

A judge dismissed a lawsuit last year that claimed Iowa Methodist was to blame for the inadequate care the Mexican men received upon their arrival in Veracruz. The courts also ruled that even though the families of the men may not have consented to their departure, they also failed to object.
‍

There’s no way to know for sure whether the two men would have recovered faster — if at all — in the United States. Instead, the truth is that the accident in a foreign land left them both with life-debilitating injuries: Cruz is paralyzed of the left side, has difficulty speaking and cannot work; Rodriquez- Saldana walks poorly, undergoes intensive therapy for swollen feet and poor circulation, and makes due on paltry wages.
‍

Between Rock and Harder Place

In the days ahead, hospital executives expect to be caught in the middle of a rock and a much harder place as a political battle over immigration and healthcare reform intensifies and crosses legislative borders. Some with an eye on the dilemma predict medical removals to increase following healthcare reform, which makes more patients eligible for Medicaid, but lessens the likelihood that the government will reimburse hospitals that care for the uninsured.
‍

Most of the discussion about healthcare in the Senate’s immigration bill has been to ask whether those who are given temporary legal status would get the same subsidies available to millions of lower and middle-income American workers under provisions of Obamacare. As it stands, the proposed immigration bill would exempt workers with new alien status from receiving employer-mandated care beginning in 2015.
‍

It is not known how this exemption would affect employer hiring practices. What can be considered is the potential incentive to hire registered provisional immigrants who are exempt from employer-mandated health insurance coverage. Employers could skip out on providing health insurance, avoid the penalty in doing so, and gain a financial windfall. The legislation would likely cost millions of low-income Americans their jobs in favor of newly legalized immigrants instead.
‍

“Good Samaritan” care isn’t a problem sprouting up on American soil, alone. Britain announced plans this month to charge immigrants hundreds of dollars a year to access its state-run National Health Service in an effort designed to clamp down on “health tourism,” a practice which enables visitors from outside the European Union to gain free services from general practitioners. Access to accident and emergency care will remain at no cost to foreigners.
‍

However, under the proposal, visitors to Britain for less than six months would have to cover costs of general practitioner visits. They already have to pay for routine hospital checks.
‍

Rather than ask the court to judge what Ibrahim Idris did or not do before he got to the Guantanamo psychiatric ward, his attorneys instead say the profiled al-Qaida insider should just be sent home from the U.S.-operated military terror prison in Cuba.

A leading NHS surgeon earlier this year said Britain had become the “world’s maternity wing” and an attractive destination for expectant mothers to give birth. Thousands of others travel to the country for cancer, HIV, kidney and infertility treatment – and then leave without paying, he said.
‍

Concerns were initially brought to light following an incident last year in which the wife of a wealthy businessman admitted that she travelled to London to specifically give birth to two boys and three girls by Caesarean section.

As a Nigerian national, she said she was not eligible to receive free treatment through NHS, but it was highly unlikely that she would be made to repay the more than $200,000 in medical costs for the procedures she had been administered while in the UK.
‍

Too Fat, Too Crazy, Too Sick

Meanwhile, in a novel twist to medical repatriation, immigration law, and the war on terror, New York lawyers are arguing that an obese, diabetic schizophrenic should be sent home to his Sudanese homeland because he is too fat, too crazy, and too physically sick to be a future danger.
‍

Rather than ask the court to judge what Ibrahim Idris did or didn’t do before he got to the Guantanamo psychiatric ward, his attorneys instead say the profiled al-Qaida insider should just be sent home from the U.S.-operated military terror prison in Cuba. Even his fellow prisoners don’t want Idris around, according to court records, because he wears his underwear on his head, whispers to himself, and is delusional.
‍

So, the motion says it’s time to send Idris home to his family, which will care for him in a nation that has few resources or a commitment to mental health. In other words, the prisoner won’t get any better.
‍

It’s unclear how the Obama administration will respond to the argument. Three years ago, a federal task force approved the prisoner’s repatriation to Sudan “subject to appropriate security measures.” But, Congress has blocked all administrative releases. Absent a court order, Idris can’t go anywhere.
‍

Talk about having a bad day. It’s a quandary that host governments and immigrant patients are trying to live with.