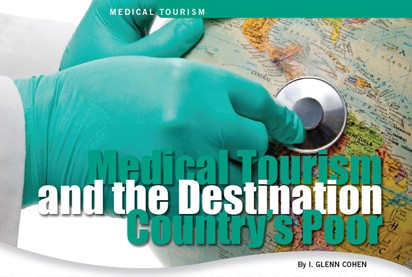 Medical tourism promises to expand access to reduce costs for Americans and other patients by getting them the care they so desperately need at significantly reduced costs. Despite this promise, a number of legal and ethical scholars and public intellectuals have raised concerns regarding medical tourism’s impact on healthcare access for the destination country’s poor.

In my recent article “Medical Tourism, Access to Health Care, and Global Justice” (52 Virginia Journal of International Law 1 2011), I tackle these questions in much greater depth. Here, I will examine these issues in a less academic vein in order to give an overview.

To get a handle on the critique that has motivated this work, consider a 2008 New York Times article by Somini Sengupta titled “Royal Care for Some of India’s Patients, Neglect for Others.” It begins by describing the care given at Wockhardt Hospital in India to “Mr. Steeles, 60, a car dealer from Daphne, Ala., [who] had flown halfway around the world last month to save his heart [through a mitral valve repair] at a price he could pay.”

The article describes in great detail the dietician who selects Steele’s meals, the dermatologist who comes as soon as he mentions an itch and the “Royal Suite” with “cable TV, a computer, and a mini-refrigerator, where an attendant that afternoon stashed some ice cream, for when he felt hungry later.”
‍

This treatment contrasts with the care given to a group of “day laborers who laid bricks and mixed cement for Bangalore’s construction boom,” many of whom “fell ill after drinking illegally brewed whisky,” ultimately leading to over 100 deaths.

Instead of the lavish treatment afforded to the visiting Steele, “they had been wheeled in by wives and brothers to the overstretched government-run Bowring Hospital, on the other side of town,” a hospital with “no intensive care unit, no ventilators, no dialysis machine,” where “dinner was a stack of white bread, on which a healthy cockroach crawled.”
‍

Being confronted with these kinds of severe disparities is discomforting, but should it motivate action relating to medical tourism? The argument in favor of regulation depends on two claims: (1) the empirical claim that medical tourism diminishes healthcare access in poor destination countries, and (2) the normative claim that these negative effects create obligations on the home country and other parties involved to do something.
‍

The question of whether medical tourism negatively affects the access to quality healthcare by the poor of these destinations can only be answered on a country-by-country or possibly even a facility-by-facility basis.

While many have claimed such negative effects have occurred in places like India, my own view is that we currently lack rigorous empirical testing that speaks to the question one way or the other.
‍

I think from the health systems and development economics literature we can usefully identify six triggering conditions, which, when combined with substantial amounts of medical tourism, may lead to reduced access to healthcare for local populations.

I discuss these triggers in greater depth and nuance in my academic work, while here I merely list them:

This list is not exhaustive, and there are complex interactions among the factors. How often do these triggering conditions obtain insufficient amounts to have a negative effect on healthcare access to the destination country? This is a question for which we lack sufficient data, but it seems a plausible enough possibility that it is worth asking the normative question, which I turn to next.
‍

Suppose that medical tourism from the U.S. (or elsewhere) to the destination country really does reduce healthcare access for its poorest residents. If this is the case, does the home country government or international bodies have an obligation to do something about it? We might draw on several different philosophical theories to examine this question.
‍

Can we say that avoiding these negative effects by restricting medical tourism is in the home country’s best interests? One version of the argument suggests America’s interest in the health of the poor abroad is founded on economic grounds: Since the U.S. shares a trade relationship with many of these destination countries that serve as producer-exporters of cheap goods and consumer-importers of our goods, improving their healthcare access benefits the U.S. by creating and maintaining a healthy population of workers and consumers.

The argument can also be made on public health grounds: In a globalized world, decreased access to treatment for infectious diseases in any population increases the risk of transmission and outbreak in other countries, especially through medical tourists’ own travel.

This objection is particularly salient for those paying out-of-pocket for their medical treatment, as opposed to those who are traveling abroad because of the inducement of their medical insurer.  For this reason, I do not think self-interest based arguments will have much purchase.
‍

Cosmopolitan theories share a commitment to ignoring geographic boundaries in the application of moral theory. Such theories come in multiple configurations. For example, Cosmopolitan Utilitarians believe in improving aggregated social welfare, regardless of national boundaries.

Also, diminishing marginal utility causes them to argue for maximizing healthcare gains among the poorest. Cosmopolitan Prioritarians do not give equal weight to equal benefits but instead give more weight to benefits to the worse off, which will often include the destination country’s poor.

Cosmopolitan Sufficientarians are not concerned with improving the lot of the least well-off or achieving equality per se but instead are concerned with ensuring that individuals do not fall below a particular threshold of what is the “currency” of distribution, including health.
‍

Though Cosmopolitan theories offer a strong case for condemning some forms of medical tourism, they face several problems. First, Cosmopolitans do not rely on causation to ground obligations. The mere fact of the destination country’s citizens’ needs creates the obligation to help.

Thus, duties may persist even when medical tourism is eliminated or its harms are remedied.  Conversely, if these needs are satisfied, there may be no further obligation to restrict medical tourism even where it diminishes healthcare access for the poor.

Finally, if one must rely on these theories to convince public policymakers to take action on medical tourism, they threaten to prove too much. Addressing the harms caused by medical tourism is a small drop in the bucket in terms of what these theories would ask us to do to right the balance between developed and developing countries.
‍

Unlike Cosmopolitans, Statists conclude that the obligations of distributive justice apply only within the nation-state. For this reason, using Statist theories to justify regulating medical tourism to prevent negative effects on the destination country’s poor is difficult, but it is not altogether impossible.
‍

One possible avenue stems from John Rawls’ recognition of a duty to assist societies that lack political, cultural and technological resources to sufficiently manage their affairs, i.e. “burdened societies” in transforming into “well-ordered societies.”

That said, while many destination countries may have poor populations facing deficits in healthcare access, many will not meet Rawls’ criteria for being a burdened society. Further, the Rawlsian duty focuses primarily on institution building; in many instances, medical tourism may actually help build institutions in the destination country while simultaneously diminishing healthcare access to the poor.

In that scenario, the Rawlsian duty to aid may actually dictate encouraging more medical tourism, not regulating or discouraging it.
‍

A second Statist avenue stems from Thomas Nagel’s conception of humanitarian duties to aid, suggesting that “there is some minimal concern we owe to fellow human beings threatened” by severe circumstances, like starvation or poverty, separate from conceptions of distributive justice; that is, we have an obligation to relieve others, whatever their nation, from these “extreme threats and obstacles,” as long as we can do so without “serious sacrifice of our own ends.”

It is unclear that latter requirement is met in the case of medical tourists paying out-of-pocket because home country restrictions on medical tourism may come at the expense of its own poor.

Further, like the Cosmopolitan theories, the humanitarian aid duty is somewhat divorced from medical tourism — if we have satisfied this duty, we have no obligation to restrict it, even if medical tourism continues to have harmful effects.  Still, in extreme cases this duty might justify restrictions on medical tourism, even for those who support Statist theories.
‍

A final set of theories seeks to position itself between the Statist and Cosmopolitan camps. One variant is offered by Cohen, Sabel and Daniels. They argue that some kinds of economic relations, short of co-membership in the same state, can give rise to “duties of inclusion,” which require the state to treat those outside the nation-state as individuals whose good “counts for something,” though it may fall short of the consideration given to a state’s own citizens.

Among the cases where such duties arise, they argue, are what I term “coercion-lite,” when developing countries do not have the opportunity to opt out of certain decisions by international bodies like the WTO with distinct responsibilities and certain kinds of international interdependencies.

Daniels gives the example of the International Monetary Funds’ historical requirement that countries like Cameroon make cut backs to their publicly funded healthcare systems and the attractive terms offered by OECD countries, which led to significant medical migration.
‍

Overall, I find these intermediate theories to be the most promising basis for a theory of what home countries owe the destination country’s poor in terms of the regulation of medical tourism.

Important next steps in this analysis include trying to further specify the content and triggers for these duties of inclusion and explaining in what way destination country’s own failure to regulate their domestic healthcare systems affects the home country’s responsibilities.
‍

Suppose the empirical and normative claims are met, and we conclude that home countries have an obligation to act to prevent or remedy the negative effects of medical tourism on the destination country’s poor. What form might that regulation take?

In my longer article, I survey a series of possible interventions, including increased foreign aid, home country governmental reimbursement only for medical tourism facilities that have made commitments to improving the lot of their local poor, taxation of insurer-prompted medical tourism and multilateral treaty regulation.

Each of these has serious benefits and consequences. But before we get to regulation, we need to first satisfy ourselves of the empirical and normative claims, an introduction to which I hope this article has provided.
‍

Glenn Cohen is an Assistant Professor at Harvard Law School and Co-Director of the Petrie-Flom Center for Health Law Policy, Biotechnology, and Bioethics at Harvard Law School. Professor Cohen is one of the world’s leading experts on the intersection of bioethics (sometimes also called “medical ethics”) and the law, as well as health law.

He also teaches civil procedure. From Seoul to Krakow to Vancouver, Professor Cohen has spoken at legal, medical, and industry conferences around the world and his work has been covered on ABC, CBS, FOX, NBC, PBS, NPR, in Mother Jones, the Economist, the Boston Globe, the New York Times and several other media venues.