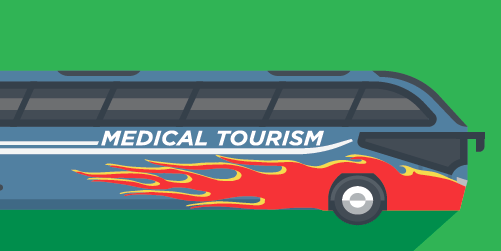 Surgery was on his bucket list, but Bruce Ryan didn’t want to wait until he retired to repair his debilitating and painful rotator cuff injury. The 59-year- old construction manager could have traveled the six hours to Stanford Medical Center – considered one of the top facilities in the United States. He had other reservations, instead.

“No, we went to France – to Toulouse, France – and did it,” said Ryan, chuckling at the thought. “It was great.”
‍

All kidding aside, the American patient didn’t have to pay a dime for his medical tourism surgery in France – even $7,000 worth of deductibles and co-pays were waived – plus, he got to tour the Pyrenees Mountains, take in the local art scene, and sample baguettes, chateaux, Truffles and other French indulgences.
‍

“The food in Toulouse was out-of-this- world,” said Ryan. “We ate like royalty. I’ll tell you.”
‍
His employer, the Blue Lake Rancheria tribe which operates a casino and hotel in Northern California, covered all costs; yet, saved about $12,000, roughly 35 percent of what the surgery would have cost in the United States. On top of that, 10 percent of the company’s savings went directly into Ryan’s 401k plan.
‍

Finding a good doctor – or an appropriate and affordable elective procedure isn’t always as easy as it was for Bruce Ryan. Despite today’s climate, which on the surface seems to have reduced healthcare options even further, a growing number of patients are looking long and hard for affordable solutions for care.
‍

For their part, they are finding medical tourism procedures – those that are internationally accredited and readily accessible when needed — to be a creative answer to what at first appeared to be a fruitless search. What they have found is not always available at their doorsteps, but sometimes several miles away, perhaps, even in another country where care is both inexpensive and first-rate.
‍

Cost savings – up to 70 percent in some cases depending on the selected procedure – are a major driver behind medial tourism. International healthcare consumers are not only finding reasonable prices, but more countries across the globe are getting into the act of whetting their appetites to travel.
‍

There are plenty of options to taste. Traditional destinations like Thailand and Mexico have been joined in the race for international healthcare dollars by competing nations and businesses representing all corners of the globe – from Puerto Rico to Poland and the United States to the United Arab Emirates.

Even the Kremlin is pumping in $58 million to attract medical tourism patients to Crimea, and Toulouse, a bustling city in France known for its medieval architecture and contributions to aerospace, is now recognized for its medical tourism procedures and opportunities.
‍

Canada, the United Kingdom, Israel, Singapore and Costa Rica are among the most attractive destinations for medical tourism, according to the International Healthcare Research Center. But, that doesn’t mean other nations and cities alike aren’t crafting healthcare strategies that cater to diverse patient populations, too.
‍

Today, consumers can sort through and decipher information and select medical tourism procedures – from dentistry to heart surgery – at their fingertips. Not only the treatment, but where and when they would like to travel and by whom they wish to have care administered.
‍

Some 8 million patients are estimated to travel for healthcare including close to 1 million Americans who are certainly accustomed to hearing about rising healthcare costs. New information, though, suggests that the United States is not the only nation struggling to pay for medical care.

Given that costs are expected to remain an obstacle to healthcare in the United States and in other industrialized countries — and now even in some large developing nations — consumers in even the most unlikely of places have begun to shop around for the best prices available.

Medical tourism is a recognized and viable choice. That’s because international facilities have made great strides in maintaining what is good about existing healthcare systems while focusing on areas that need improvement.

Better care – the Joint Commission International has accredited close to 700 healthcare organizations worldwide – and accessibility has made the decision to board a plane for medical tourism procedures that much easier.
‍

Quality alone would be enough of an incentive to push wealthy clients to reach for their wallets and travel, but the emergence of low-cost airlines and social media pricing has opened the doors to patients from the entire spectrum of affluence and lifestyles.
‍

Capitalizing on its reputation for luxury and already considered one of world’s most visited cities, Dubai is counting on a mix of business with the pleasures of spa getaways, where patients come for the seven-star hotels, but stay for cosmetic surgeries and wellness treatments.
‍

Right smack in the middle of desert tranquility and a dynamic business hub, Dubai is launching dedicated clusters of spa resorts, sports medicine facilities, and nutrition centers under a new health and wellness strategy geared toward medical tourism.
‍

Health is Job One

From an employer perspective, that’s a topic of conversation – from the lunch room to the boardroom – that is all well and good. Consider that about one million workers each day will call in sick, costing the American economy some $84 billion per year.

Obesity rates in the United States have doubled since the 1970s. And although these rates have leveled off somewhat in the last few years, employers are persuading their employees, like Joy Guion, to get and stay healthy more than ever.
‍

When Guion, a native of North Carolina and employee at HSM, boarded a flight to Costa Rica for weight-loss surgery, she wasn’t accustomed to traveling overseas, let alone for medical care and certainly not to a sun-soaked destination where she would stay at a four-star hotel with a personal concierge and a local driver.

Her employer even sent Gary Harwell, a retired manager at HSM and former colleague who needed knee replacement surgery, along with her. Here’s the kicker: both employees didn’t have to pay a dime for their surgeries – not even travel expenses or post-op recovery. HSM, a self-funded employer of 2,500 U.S.-based employees, picked up the tab.
‍

What’s more, as an incentive for employees to get onboard with medical tourism, HSM waives copays and deductibles, and covers travel expenses for both the employee and a companion. To employee members of the Medical Tourism Association® like HSM, the math makes perfect sense.

So, when the bandages came off, both Guion and Harwell received a bonus check for at least $2,500 from HSM, or up to 20 percent of the savings the company enjoyed in insurance costs.
‍

What’s the catch? There isn’t one. HSM saves money, about $10 million in healthcare costs in the past five years. Close to 250 of HSM’s employees have traveled abroad for medical tourism procedures, and more are scheduled to go.
‍

The competition for healthcare travelers is brisk, only because the stakes are so high. Throw a dart at a world map, and see where it lands. Chances are medical tourism related interests – from hospitals to hotels – are vying to learn what makes healthcare travelers tick as they try to outdo each other with state-of-the-art medical technology and inviting accommodations.
‍

Located in the city’s upscale Gangnam District, foreign patients are attracted to South Korea’s Imperial Palace Seoul, which offers visitors discounts on its hotel rooms and services at an on-site medical center that includes dentistry, dermatology, and stem cell clinics.

The majority of patients are drawn to the center’s service, privacy and convenience, but also the aesthetic selling points – marble-floored lobbies and VIP suites to meet both medical and vacation needs — as well.
‍

But, quite, often, there is more to medical tourism than meets the eye. When Philip Sheldon was told by his Toronto doctor that he was on a six-month waiting list for cataract surgery, the retired business executive didn’t blink. Instead, he had the foresight to call his son-in-law in Bogotá to see what could be done.

Soon after he hung up the phone, Sheldon was on a plane to Colombia, where he joined thousands of patients who undergo medical tourism procedures – from eye surgery and dentistry to fertility and reproductive treatment – without a wait.
‍

The globalization of healthcare – recent indicators suggest the market for medical tourism to be valued at $50-65 billion, and growing at approximately 20 percent annually – is not only encouraging consumers to shop around the world for a price they can afford, but it is challenging U.S. hospitals, insurance companies and related proprietors to reposition their procedures, treatments and services to catch their attentions.
‍

Government entities, business groups, and healthcare providers among them are already joining forces across the United States to lure both international and domestic patients. The hope is to, over time, provide an ongoing stream of revenue into local communities and generate jobs by dovetailing medical tourism procedures with existing tourism sites – beaches, historic landmarks, restaurants and retail shopping destinations.
‍

Partnerships of this type have gained momentum in Florida, where an already prosperous flow of vacation travelers who visit the Sunshine State for sandy beaches and Disney attractions will be further supplemented by international medical tourism patients seeking top-notch and affordable medical tourism procedures and treatments at hospital destinations around the state.
‍

Alex Barnes wasn’t much interested in the sun and surf seven years ago, when he was three-years-old and carrying a giant tumor lodged in his brain. At best, the British child’s chances were slim when he arrived in Jacksonville, Florida, to undergo a pioneering medical treatment – proton beam therapy – that the National Health Service back home in the United Kingdom could not provide.
‍

Today, his mother holds Alex in her arms. There is no sign that anything was ever wrong with her son. Rosalie Barnes can’t put a price on the medical tourism experience. She does know it was well worth the trip.
‍

She has authored and co-authored several books, has been a keynote speaker at hundreds of international conferences and has been a valuable resource regarding medical tourism initiatives in media outlets worldwide.