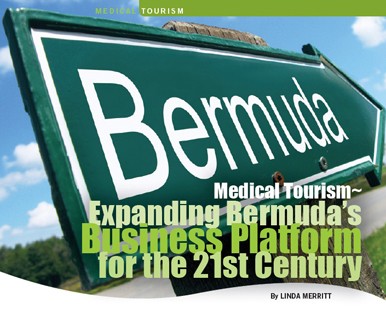 Bermuda is filled with lovely natural harbors, pink sandy beaches, and friendly people. But it is also developing itself as a medical attraction for its American neighbors while its citizens contribute to the American economy.

Bermuda is a small remote island with its closest neighbors being those residents on Cape Hatteras, North Carolina who are about 800 miles from its shores. Bermuda is less than a two-hour flight from the east coast of the United States and an hour from Miami. It has one major airport and a terminal for private jets.
‍

Bermuda has always enjoyed a good relationship with its neighbors in the U.S., with whom it has its closest trading partners. The country is also an associate member of Caricom, the Caribbean Community. Bermudians do not require a Visa to travel to the U.S.; therefore, its citizens are consumers of material goods, medical goods and enjoy a sizable expatriate population. Bermudians are known for leaving Bermuda on the early morning flight to New York or Miami and coming home that evening with lots of shopping bags.
‍

Bermuda’s core industry is financial services. In fact, Bermuda’s reinsurance companies were the first to pay with the tragedy of 9/11. Tourism is the second core pillar of the economy.
‍

Bermuda’s trade in health services is generally referred to as “overseas care.” It is also known as medical tourism in other contexts. While international trade in health services is of increasing relevance to countries around the world, in small jurisdictions such as Bermuda and the Caribbean, there is a long-standing practice of relying on overseas care to fill gaps that a community hospital jurisdiction cannot provide. This is because the volumes and economies of scale necessary to provide complex tertiary treatment cannot be achieved.
‍

The annual growth rate in expenditure on overseas care was 20 percent, placing Bermuda among the countries with higher growth rates. In 2010, healthcare expenditure overseas totaled over BD$91 million (U.S.$91M), which does not include out of pocket expenses or other non-covered expenses.
‍

Bermuda’s Health Council produced its first report on health system finance and expenditure in 2010. The report followed OECD guidelines and was developed to provide a reliable, comprehensive and comparable policy-relevant picture of how the health system is financed, produced and utilized.

‍
With a population of less than 65,000 in 2009, the total health expenditure both for the public and private sectors was more than $557 million. This data indicates the total health system finance grew by 47.5 percent from 2004 to 2009, which is an annual growth rate of 9.5 percent per annum.
‍

Bermuda’s Health Council report indicates the total health expenditure reached BD$8,661 per capita in 2009. This was significant in that this figure represents 9.2 percent of Bermuda’s 2008 per capita income of $92,818. Approximately 10 percent to 11 percent of the population lives on incomes less than $36,000, but this is an estimate as the island does not have an income tax structure.
‍

Bermuda is in the process of building a new hospital which will be completed in 2014. Bermuda’s current hospital is accredited by a Canadian credentialing authority, and the medical staff is very diverse, as medical practitioners come from as far away as the Philippines, South Africa and the United Kingdom.
‍

Currently, the local hospital (KEMH) enjoys partnerships with John Hopkins, Lahey Clinic and other centers of excellence. A strategic objective for the local hospital is to promote a health and wellness tourism product in the very near future, and currently, the hospital is engaged in some surgical procedures with overseas doctors who concierge services for private patients for procedures they are unable to perform in the U.S.
‍

In addition, there are medical clients who come to Bermuda for cosmetic services and specific surgeries not yet approved in the U.S. Bermuda’s price points are high, and we understand we would have to serve high-end clients and deliver value for money.
‍

There are opportunities to create economies of scale in purchasing power, and it is certain relevant key partners and stakeholders will be and are seeking such opportunities.
‍

Bermuda looks forward to developing key strategic partners who like its brand.
‍

Linda Merritt, JP, is Principal Associate of The Lily Group, a private health consulting company. She was appointed Chairman of the Bermuda Health Council in 2008 and is now serving her second term in this position. The Bermuda Health Council is responsible for the enhancement and regulations of the health care system in Bermuda and reports directly to the Minister of Health.