Medical Tourism Gives Added Meaning to Made in Japan 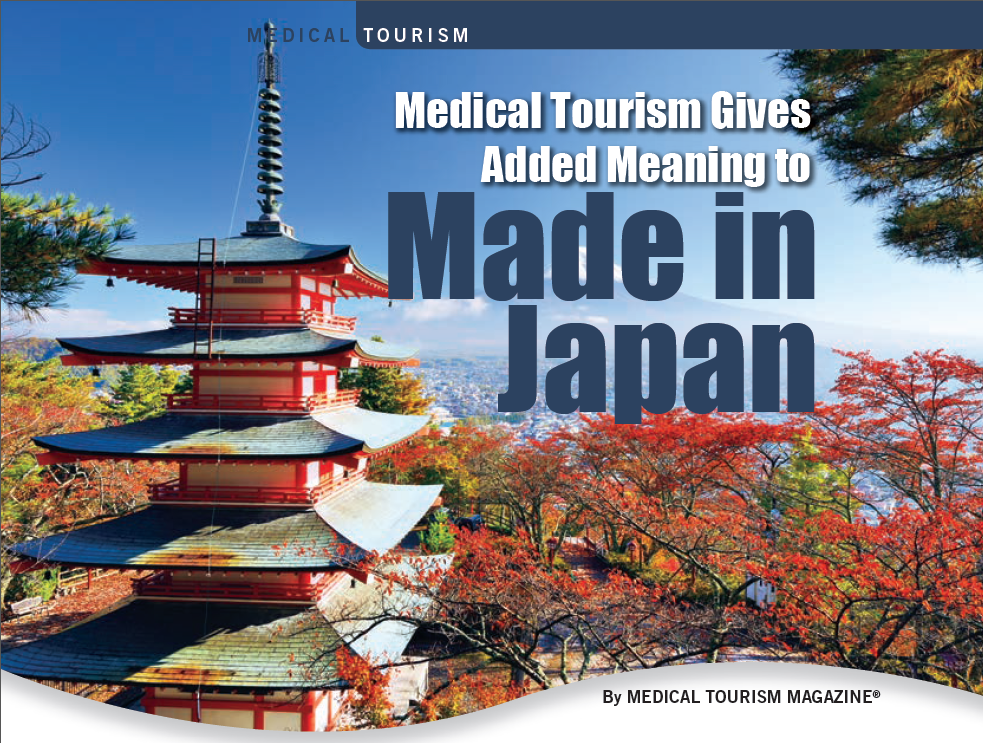 Move over consumer electronics and fuel-efficient automobiles and make way for medical tourism. Made in Japan has taken on added meaning.

Responding to a growing demand worldwide for timely and cost-effective medical procedures and treatments, hospitals and travel agencies in Japan have begun to piggyback off national efforts to boost the number of foreign visitors to the land of the rising sun by promoting medical tourism opportunities. The government of Prime Minister Shinzo Abe hopes the added attention will triple the number of international travelers visiting Japan to 30 million by 2030.
‍

Some travel agencies are taking advantage of the tourism drive with a strategy of their own. The Japan Tourism Agency, which began holding workshops for industry affiliated resources, pushed the envelope further at the 6th World Medical Tourism & Global Healthcare Congress, Nov. 3-6, at Caesars Palace, in Las Vegas, where a specific forum for medical tourism facilitators collated greater coordination of care for both domestic and international consumers.

“Medical tourism has enticed more than one person to challenge the entrepreneurial spirit in all of us,” said Renée- Marie Stephano, president of the Medical Tourism Association®, who welcomed some 2,300 international delegates – hospital administrators, physicians and clinicians, employers, insurance executives and travel and tourism entities – to the congress. “Gaining a grip on the industry doesn’t come overnight and shouldn’t; certainly when considering that facilitators play a significant role in the successful outcomes that international patients expect and deserve.”
‍

For its part, the Nippon government introduced a medical visa, in 2011, that allows foreigners to stay in Japan for up to six months for treatment. Since then, the number of tourists entering Japan on medical visas has grown to more than 450.
‍

Shorter trips have become common as well. Li, a Chinese woman in her ‘70s, is one of the more recent visitors to the new Japanese medical tourism marketplace. She underwent a one-day medical checkup that featured a cutting-edge positron emission tomography (PET) scan to detect early-stage cancer at Nishidai Clinic Diagnostic Imaging Center in Tokyo.
‍

For its part, the Nippon government introduced a medical visa, in 2011, that allows foreigners to stay in Japan for up to six months for treatment.

The checkup, which also included computed tomography (CT) and magnetic resonance imaging (MRI)) scans and a brain check, cost her ¥249,000, the same price that Japanese citizens pay. But foreign visitors may find that hiring a medical tourism facilitator who serves the dual role of interpreter at a cost of some ¥100,000 to ¥250,000, is necessary in most cases, the clinic said.
‍

Li said she found flying to Japan from Shanghai for the checkup worthwhile and would recommend to friends back on the mainland.
‍

“There may be similar medical equipment in China, but I value and trust Japanese doctors’ experience,” said Li, who planned to visit the Hakone hot spring resort near Mount Fuji afterward.
‍

Li also said she was surprised at the Tokyo clinic’s hospitality, noting that the staff kindly took care of her, providing a blanket, for example, when she was cold. “It would be hard to get the same level of service in China because there are many patients there,” she said.
‍

Nishidai Clinic, a PET scanning pioneer in Japan, began accepting customers from abroad in December 2009. The facility has examined about 210 foreigners, mostly wealthy Chinese, since.
‍

Gaining a grip on the industry doesn’t come overnight and shouldn’t; certainly when considering that facilitators play a significant role in the successful outcomes that international patients expect and deserve.

“We have Japan’s top-level checkup system,” said Takaho Watayo, director of the clinic. “It should not be monopolized only by Japanese. Japan is a super-aging society, and the world can learn lessons from its medical services including checkups.”
‍

Watayo said accepting visitors from abroad also helps the hospital make better use of its expensive medical equipment, such as the PET scan machines, which detect cancer by revealing accumulations of an analogue of glucose after a small radioactive amount has been injected into the body. An accumulation signals that a patient might have cancer.
‍

The agency arranged visits for about 100 customers from China in 2012, compared to about 40 between April and December 2009. The rate slowed, however, after diplomatic tensions rose with China over the Senkaku Islands dispute and the March 2011 earthquake and tsunami ravaged the Tohoku region and set off the Fukushima nuclear crisis.
‍

Aoki said inquiries from countries, such as Russia, Vietnam and the Philippines, are also on the rise, not only for checkups, but also treatment for cancer, leukemia and infertility.
‍

In 2009, JTB Corp. formed a hospital alliance to offer interpretation and other services to help foreigners get treatment in Japan.

More than borders will need to break down.

“The current biggest bottleneck for medical tourism is language and, if the issue is solved, I think it will grow more,” said Aoki.