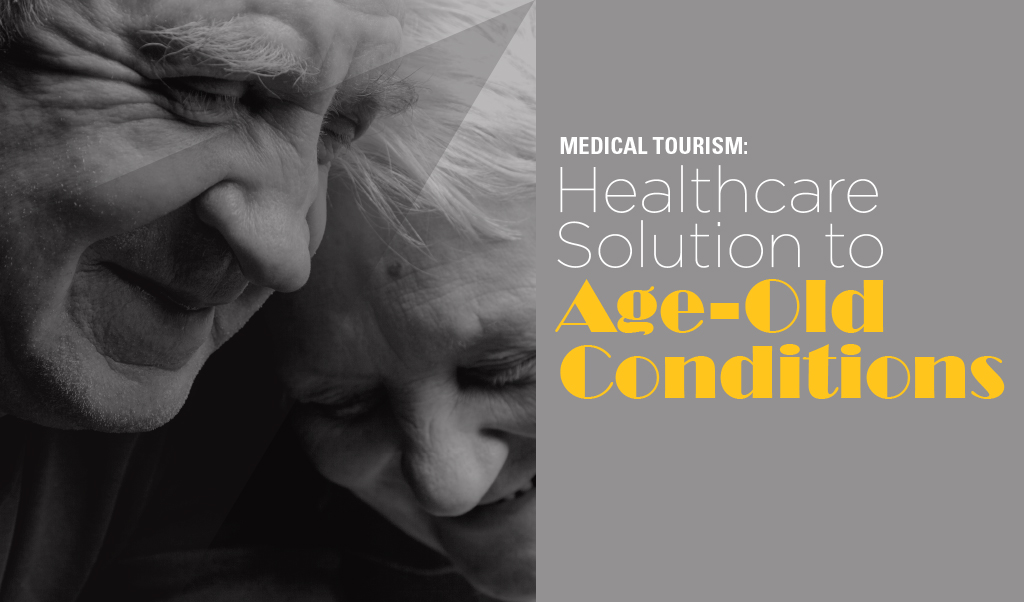 Along the cobblestone streets of Nogales, fewer than 20 miles south of Tucson, Ariz. where curio shops sell a taste of Mexico, the Reed family follows in the same footsteps of early Spanish Conquistadors who first explored North America’s most-western expanse.
‍

Jim Reed, 74, isn’t looking to purchase cowboy boots or hand-carved folk art. He isn’t even interested in sipping a margarita at the local Salon Regis. He has come to Mexico with his son, Keith, 46, to get the best in dental care that his Medicare won’t buy back home in the United States.
‍

For $35, Jim Reed can return to the United States with his teeth cleaned, something that might bring a smile to the faces of 31 million fellow Americans considered under insured whether they are aware of medical tourism or not.
‍

Since Obamacare was passed into law four years ago, take-charge seniors like Reed have become fabric in a common thread: Americans who live on fixed incomes and can’t afford supplemental medical insurance are looking long and hard and, in many cases, across borders to find solutions that balance their healthcare needs with daily living expenses.
‍

In many cases, American retirees have found cost savings on elective procedures to be enough of an incentive to whet their appetites for medical tourism. Not all destinations boast the proximity that Mexico does for them, but many countries – from Thailand to the United Arab Emirates — proclaim reduced prices of up to 70 percent off of similar treatments found in the United States. Canada, the United Kingdom, Israel, Singapore and Costa Rica are among the most attractive destinations for medical tourism, according to the International Healthcare Research Center.
‍

But, that doesn’t mean other nations and cities alike aren’t crafting healthcare strategies that cater to diverse senior patient populations, too.
‍

Just off the mainland in Puerto Rico, government officials have invested in an aggressive marketing campaign to create a new stream of consumers – many of them now seniors living in the United States – who they hope will return to the island for medical treatments and, in turn, reinvigorate the commonwealth’s sluggish economy.
‍

Today, elderly Americans, hobbled by the rising cost of living longer, can sort through and evaluate information – including Puerto Rico’s certification in an intensive International Patient Services® program — to select a medical tourism procedure at their fingertips.

Not only the treatment — from dentistry to heart surgery – but where and when they would like to travel and by whom they wish to have care administered.
‍

Thanks, in part, to medical advances, senior citizens are living longer lives and, thereby, reshaping U.S. demographics. By 2050, when census figures project the number of elderly Americans to reach 79 million – twice the number reported today — seniors will account for 21 percent of the U.S. population.

Many will live with chronic disease and demand treatment that will prey upon whatever financial resources they have available. For 70 percent of Americans, 65 years and older who are suffering from chronic disease, such as stroke, cancer, arthritis and diabetes, that means Medicare – the federal health insurance program for senior citizens.
‍

The government entitlement is good for about 80 percent of a senior’s eligible medical expenses. Remaining costs are out-of-pocket, and there is no annual cap on just how much a patient 65-and-over may be required to pay.

Another crux is that Medicare doesn’t cover everything; just what is deemed “medically necessary.” Vision and hearing care and medical services outside the United States typically slip through the government safety net.
‍

Medicare’s future is at best uncertain. Some say the nation’s flagship health system will be broke by 2030. Others believe continued cuts to Medicare are imperative and will likely trigger some of the biggest changes in the program’s 50-year history.

Modifications this year will either include hikes in premiums or higher deductibles. While this financial cornerstone to senior healthcare is reshaped – if, ever so, slowly — America’s aging population is demanding better solutions to balance cost, quality and access.
‍

The Affordable Care Act did make good on its promise to insure more Americans. An estimated 15 million have gained insurance since the legislation was passed in 2013. But, Obamacare has not done as much as it had hoped. Health insurance remains a point of contention, particularly for those who are underinsured.
‍

Cost and access to care are most commonly cited as the nation’s top healthcare concerns. Medicare, Medicaid or even private insurance may not be worth the paper it’s written on for subscribers who can’t access the care they need when they need it most.

Lengthy waits to see a doctor or specialist of choice and hidden costs are gripes often heard from a growing list of American patients, who confirm just a symptom of a much larger reality plaguing U.S. healthcare today.
‍

Traditional health insurance offered through her husband’s plan at work had been too expensive for Lorena Villanueva to purchase. But, for $150 a month, the Affordable Care Act enabled her to join the ranks of the insured.

When her allergies flare up, leaving a sore throat and rashes on both arms, Villanueva puts aside her job as a house cleaner to drive the 70 miles from Riverside, Calif. across the border into Mexico for medical attention. Her rationale: out-of-pocket costs in the United States are too much for her to afford and reserved only for when emergencies surface.
‍

Desperate to diffuse these costly out-of-pocket payments before dipping into their wallets or retirement savings, Americans – even those fortunate to have private insurance or coverage through the Affordable Care Act – continue to shop around for healthcare. Sometimes that search extends overseas.
‍

Jeff Wheeler, a retired boilermaker from Maine, was more than happy to shoulder the cost of a three-week hiatus to Southeast Asia, where he traveled to Vietnam to explore Hanoi, Da Nang and the tunnels of Chi Chi before returning to Thailand and a hospital in Bangkok to correct an old work injury.

Shoulder replacement overseas cost Wheeler roughly $9,000, about 80 percent less than the $130,000 a Massachusetts hospital had quoted him for repairs and more than enough in savings to cover his travel and sightseeing expenses in Cambodia. Surgery has enabled him to troll lobster without pain off his recreational boat near Westport Island.
‍

Stories like Wheeler’s have pushed medical tourism into mainstream consciousness. Americans have always expressed a penchant for travel. Now, those desires are complemented with medical care. According to a 2015 Medical Tourism Association® survey, 65 percent of respondents said they were interested to join the roughly 1 million who already travel for medical treatments annually.

Their attraction has caught the eye of employers in the United States, especially companies which self-fund their healthcare insurance benefits and can waive co-pays for employees who opt for less expensive care abroad.
‍

A self-insured health plan allows an employer to directly fund the company’s employee medical benefits offerings. Rather than pay premiums to an insurance carrier – like Blue Cross Blue Shield, Aetna, or Cigna — to cover employee benefits, a business owner will pay out-of-pocket from company assets to cover claims as they are presented.

Employers will often work through a third party to process claims and payments while taking advantage of the cost control, cash flow improvement and investment, and plan-design flexibility that self-funding offers.
‍

The number of U.S. companies that partially or completely self-fund their healthcare plans has increased from 44 percent in 1999 to almost two-thirds in 2012. Today, self-funding plans provide health insurance to more than 100 million Americans.
‍

HSM Solutions, a North Carolina-based manufacturer of components to transportation, furniture and bedding markets, has taken advantage of the self-funding approach to save about $11 million since implementing a medical tourism plan in 2010.

Gary Harwell was 65 and retired when HSM offered him the chance to travel for knee replacement surgery at a private hospital in Costa Rica. Travel expenses, surgery and post-op recovery didn’t cost the former plant manager a dime. HSM foot the bill and even threw in a $2,500 bonus check it recouped from money saved off Harwell’s insurance payout.
‍

Knee problems can take a toll on seniors and replacements have become a common part of American medicine. The Centers for Disease Control and Prevention reports approximately 719,000 performed annually in the United States.

Patients in need of orthopedic surgery including hip, knee and shoulder treatments can often face weeks, if not months in delays before surgery. Prices for orthopedic surgery can substantially vary, as well, even within the same geographic location. And that’s not even taking into account post-operative rehabilitation.
‍

Bruce Ryan learned of those price variations firsthand. Instead of traveling the six hours to Stanford Medical Center – considered one of the top facilities in the United States — to repair a debilitating and painful rotator cuff injury, the 59-year-old construction manager went to France.

His employer, Blue Lake Rancheria, which operates a casino and hotel in Northern California, covered all his expenses – even $7,000 worth of deductibles and co-pays; yet, saved about $12,000, roughly 35 percent of what the surgery would have cost in the United States. On top of that, 10 percent of Blue Lake’s savings went directly into Ryan’s 401k plan.
‍

Now compare Ryan, who’s good fortune has enabled him to put off retirement and sock away future living expenses for his golden years, with that of Randy Farris, 58, a factory worker from Conger, Minn., who needed a knee replacement three years ago. His insurance covered 80 percent of the bill, but he was forced to cash in an I.R.A. to pay his $4,000 share.
‍

Medical bills are always a tough pill to swallow – at any age. But, unexpected expenses for older Americans can not only provoke deep financial liability but, perhaps, delay plans for retirement, impinge on housing options and perpetuate unwanted stress in daily lives. Baby Boomers retiring now can expect medical costs to drain well more than half of their Social Security benefits.

The news is even grimmer for couples who plan to retire later, according to Healthview Services, a Massachusetts-based cost-projecting software company, which claims about 90 percent of the lifetime Social Security benefits of couples currently aged 55 will be devoted to healthcare costs.
‍

Such a rude awakening has spawned what may seem like a dream come true for some Americans who are choosing to live out their remaining years overseas where the cost of senior care is more affordable.

Mike Wooley, 64, and his wife, Ann, chose Lake Chapala, in Mexico, where even though Medicare doesn’t apply, healthcare costs including doctor visits and prescriptions are often less than co-pays in the United States.
‍

The Wooley’s new home is close to Guadalajara, where new hospitals and clinics are being built to accommodate that influx of Americans. Affordable independent living, one of the finest medical hubs in Latin America, and an intangible respect for the elderly were so appealing that the Wooley’s brought Mark’s 86-year-old mother along with them.
‍

Kempie McKenna chose a room at Abbeyville, a non-profit independent-living home located in Lake Chapala for men and women age 65 and above who are still physically and mentally fit, but no longer wish to reside alone. Mark and Ann Wooley say they will live at Abbeyville someday as well.
‍

Renée-Marie Stephano, JD, is president of the Medical Tourism Association®, the first membership-based international nonprofit trade organization and think-tank for the medical tourism and healthcare industry.

The MTA provides strategic development programs for destinations seeking to create sustainable and attractive programs for foreign direct investment. The MTA provides advisory services to investors interested in the industry and matches these financiers with medical tourism-related projects. www.MedicalTourismAssociation.com